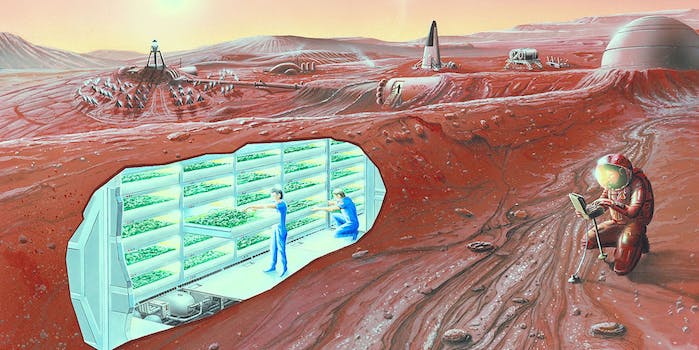 8 volunteer Mars colonists you should follow on social media

The Mars One mission finalists are about to become famous. Here's how to start following them now.

The most surprising thing about the 100 finalists for the Mars One mission is how normal they are.

Narrowed down from a pool of 200,000 applicants, these 100 volunteers are competing for a one-way trip to Mars in 2024. The plan is for Mars One to document the final stages of the selection and training process in a reality TV show, with the general public voting on which four applicants make the final cut.

This idea has already been criticized both because of its Big Brother-esque concept and because many scientists say the organizers are not fully prepared for the mission. The estimated cost of the first journey is about $6 billion, and that doesn’t cover supply runs or later journeys for additional colonists. But even if Mars One turns out to be a pipe dream, the selection process is fascinating in itself. If you believe the hype, then four of these everyday civilians will spend the next decade being transformed into world-class astronauts, each with the goal of leaving their families behind to settle on Mars.

During the application process, aspiring Martians had to create a personal profile and submit a video. The result was something not unlike LinkedIn crossed with a geeky dating site, full of people listing their disappointingly average interests (yoga, running, science, Star Trek, table-top games) and trying to give the impression that they have the perfect set of traits to become an interplanetary explorer. Many of them went on to document their experiences on social media, so we’ve selected a few of the best Mars 100 accounts to follow.

The shortlist is pretty evenly split between people who simply have a passion for exploration and adventure and those with academic experience in relevant fields like physics and astronomy. Maggie Lieu falls into the latter category.

Lieu is one of the more prominent candidates in the U.K., already carving out a niche as a lecturer and occasional BBC space correspondent. The 24-year-old astrophysics Ph.D. candidate can be found on Twitter at @Space_Mog and on her blog, where she has written on topics such as giving birth on mars.

Patil is one of the 38 Americans to make it into the third round. His Facebook page, Biologist On Mars, is a good choice if you’re interested in a more measured outlook on the success or failure of Mars One. Recent posts touch on his concern over whether the project will stay on schedule, backed up by reports that Mars One has suspended work on its early robotic probe missions. However, it would be wrong to mark him out as a pessimist. In an article for the Guardian, he wrote, “I find it far more interesting to think about how we might make the mission work than to compile the reasons why it might not.”

“die on Mars” has gone from cute play on words to a depressing meme. We’re going to Mars to live, not to die. #MarsOne #ValarMorghulis

MacDonald was one of the three hopefuls profiled by the Guardian last month in a short documentary called “If I Die On Mars.” His appearance as a nerdy physicist led people to compare him to The Big Bang Theory‘s Sheldon Cooper, which he cheerfully acknowledged in his vlog response a few days later. But while there are similarities—he’s a scientist, he can recite pi up to 90 digits, he’s not interested in sex—he’s hardly the socially awkward stereotype these Sheldon comparisons suggest. Remember, Mars One is specifically looking for people with mental and emotional resilience and the ability to work as a team, which is why so many of the Mars 100 seem so relentlessly upbeat and optimistic.

I'm proud to announce that I have been selected as one of the final 100 Mars One Astronaut Candidates! pic.twitter.com/mTkWGbCKxg

You can follow MacDonald on Twitter at @martiancolonist and on YouTube under the same username, where he regularly posts interviews, vlogs, and hosts in Q&As about Mars. Here he is quizzing Dr. Norbert Kraft, the head of Mars One’s astronaut selection committee, on how the selection process works and how the training program will proceed over the coming years.

American political consultant Sonia Van Meter is one of the most prolific candidates, appearing on talk shows and being interviewed by everyone from Time magazine to the Daily Dot. This is partly because she’s great at handling the media, but also because many outlets are obsessed with her status as a married woman with stepchildren. Larry Wilmore satirized this when she appeared on The Nightly Show, asking, “Why do you hate your kids?”

Even though there are plenty of other parents in the Mars 100 shortlist, there seem to be precious few TV segments quizzing male candidates about leaving their families behind. Moms, on the other hand, are deemed far more newsworthy.

The BBC ran an article last year titled “Wife on Mars: A Love Story,” interviewing Van Meter and her husband. It simultaneously covers one of the most fascinating topics relating to Mars One—the decision to abandon traditional human relationships in favor of scientific enterprise—and highlights the very different ways male and female participants are likely to be treated by the media. Luckily, Van Meter already seems up to the task of changing the subject, usually bringing the conversation round to the inspirational nature of the Mars One mission.

American DIY enthusiast Cody Reeder submitted one of our favorite Mars One applications, hanging upside down for most of his video statement. According to his profile, he grew up in an off-grid ranch in Utah, and his YouTube channel proves that he’s already obsessed with the kind of survival skills an astronaut might need to stay alive on Mars. He’s made videos about everything from beekeeping to inventing home-made vacuum containers to building his own greenhouse.

German-born software developer Lennart Lopin is one of the many applicants who name-checks Star Trek, Star Wars, and astronomy among his childhood influences. After three years living as a Buddhist monk in Sri Lanka, spending hours every day meditating in a cave, he believes that he is well on the way to being prepared for a life of sensory deprivation in an enclosed space like the Mars colony.

One of the most in-depth internet resources on Mars settlement plans http://t.co/UJzelic59Z Checkout especially the slide on electrical

Lennart’s particular passion is Marscoin, a cryptocurrency Lopin and others hope will become the de facto currency on Mars—if Mars One agrees to endorse it, anyway.

We shouldn’t be surprised there are so many TED speakers among the Mars 100. This is a high-achieving group, after all.

Diane McGrath (whose Mars-related TED talk can be watched here) certainly falls into the “high-achieving” category. Her Mars One profile lists charity work, postgrad research on food sustainability, and an intimidating array of sporting achievements including “ultra marathon.” You can learn more about her in the short documentary Mars Calling.

If your social media platform of choice is Tumblr, then Scottish astronomy student Hannah Earnshaw is the Mars 100 candidate for you. Her blog, hannahgoestomars, updates regularly, and she’s clearly already at one with the Tumblr geek community. Her Twitter profile lists her as a LARPer, a feminist, and a gamer, for goodness’ sake. (Oh, and it looks like she’s a Marvel fan as well. Hannah, we’re rooting for you!)

Got a package from my mum with some of the Scottish Mars One press. Really love that Times photograph! pic.twitter.com/mi7EYJTiLY

Because these are only nine of the 100 aspiring marstronauts in the program, we’re just scratching the surface. We also recommend Joseph Roche’s excellent TED talk on life on Mars, Kenya Armbrister’s blog, Dan Carey and Joanna Hindle on Twitter, and many more.

The Mars 100 are an interesting and diverse bunch, often with very little in common. The main similarities between these intrepid adventurers are that many are Star Trek fans, and they’re getting increasingly annoyed by the media narrative that they’re going to “die on Mars.” Get it right, everyone. They want to go to Mars to live.

Update 5:18pm CT, March 4: Andrew Radar was previously listed on the Mars One website as one of the finalists, but he has since been removed.