Mario & Luigi: Paper Jam is a solid adventure in the Mushroom Kingdom

Paper Jam looks so colorful and inviting, it’s hard not to get swept in.

Turning on Paper Jam, you’re instantly made aware of how different it is from other role-playing games out of Japan. In proper Mushroom Kingdom fashion, colors are bright and vibrant and the characters are absolutely adorable. Paper Jam looks so colorful and inviting, it’s hard not to get swept in.

Since it’s a Mario game, story is nothing but a light setup for the adventure forward. Simply put, Luigi accidentally lets the world of the Paper Mushroom Kingdom out into his world, creating a cross-dimensional team up story akin to DC or Marvel Comics. As Bowser’s minions learn of their paper counterparts, so does Bowser himself. He teams up with Paper Bowser to, once again, capture Princess Peach and her paper analogue. The plot thread is so predictable that even Peach makes fun of it. 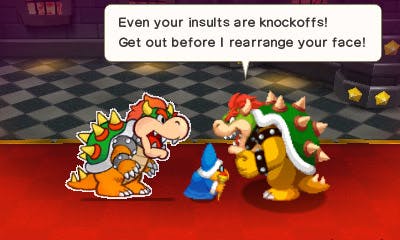 The inclusion of Paper elements inside the pastel world of Mario & Luigi does not detract from the game’s visual pop, but only adds to it. Running through the various locals, the mix of paper and pastel creates an interesting environment to run around in, even if at times it can seem bare.

Unlike traditional Mario games, Mario RPGs have had one differentiating aspect: All of the characters have voices. From Goombas to Koopas, all have their own witty dialogue and banter. The humor comes from well-written exchanges that have characters making comments that are self-referential to the Mario series without becoming panderous. And unlike some past Nintendo games, I did not come upon any meme references during my playthrough, which is a major plus.

Regardless of how pretty the game may look or how well the dialogue is written, Nintendo will always prioritize gameplay, and that holds mostly true for Paper Jam. Like past Mario & Luigi games, it’s turn-based gameplay with clever platforming thrown in. As you jump on enemies or hit them with hammers, the enemies too will fight back. Instead of just standing there and taking the hit, if timed correctly, you can jump and dodge attacks. It’s one of the things that has made the series so different.

The inclusion of Paper Mario adds another element and layer of strategy. Paper Mario has some health, but his unique ability is to create six versions of himself. If he takes hits, some of his copies will be destroyed. You can either choose to recreate them at the cost of a turn, or use your currently alive copies for lesser damage. 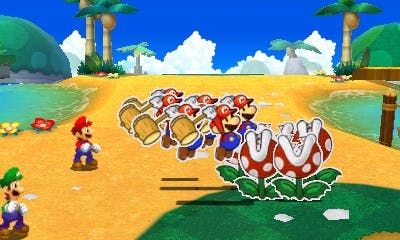 Special attacks are also where the game puts some pressure on the player. Using a “Bros. Attack” uses some of your Bros. Points, and it does require accurate timing. Mistiming the kick of a koopa shell or hammer strike can prevent you from dealing massive damage, making it costly during boss fights. And it should be mentioned that the game does a great job of easing players into new mechanics with easy-to-understand explanations, videos, and tutorials.

Other than timing, the game also requires a decent amount of dexterity. You’ll need fast thumbs to quickly jump Mario, Luigi, and Paper Mario from asynchronous attacks. This dexterity may turn off some, but I commend Nintendo for adding something that pushes players a bit past their comfort zones.

Enemies themselves will do what they can to hurt you. Some will attack you in easily recognizable patterns, making it easy to dodge. Others will mess with the timing, throwing you off and having you jump early, leaving yourself open when you land. Rarely did it ever feel cheap, but new enemies pose the greatest threat as you have no experience in dealing with them. Luckily, if you get a game-over screen, the game will immediately allow you to retry the match. 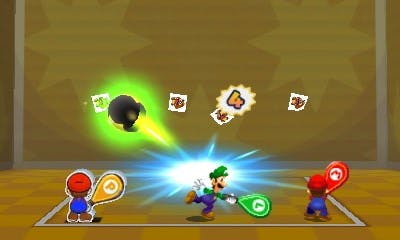 With many Japanese RPGs, combat systems are usually the only means of interaction other than speaking with non-playable characters. In Paper Jam, Nintendo has deliberately added various other mini-games and side challenges to keep the game moving at a steady pace. Seldom will you feel that the game is slowing down or forcing you to grind. There’s a constant pace to keep you engaged with the story. Speaking of grinding, there’s very little when compared to other Japanese RPGs. When you beat enemies in a certain area, they won’t reappear immediately. With a finite number of enemies, you can’t level yourself far beyond the next boss. It’s an interesting design decision, but one that may leave RPG fans annoyed, especially those who like pre-planning for each boss and being over prepared.

Luckily if you feel underprepared, there’s a new card system that should make fighting bosses a little easier. Players can create decks of 10 cards with special abilities. As you land perfect hits on your enemies, the game will give you star points. You can use these star points to activate certain cards; the more star points you use, the greater the effect. Cards add another layer of strategy as you’ll make decks that compliment your play style. I, however, found myself using cards that just packed the greatest wallop.

The major addition to Paper Jam is the inclusion of papercraft battles. Eventually you’ll run into some clever goomba’s that create a giant paper-made mecha. Luckily, your Toadstool friends will be there to back you up with your own mecha. The papercraft battles are an interesting diversion from the regular gameplay. It requires timing and rhythm to topple the other papercrafts. These battles can be hit-or-miss, sometimes feeling like a chore. Luckily, it’s not very difficult, and for most it will be an entertaining change of pace. 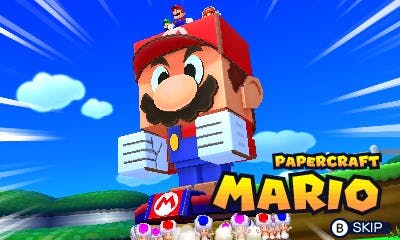 Other mini-games have you searching for toads or doing other mundane tasks. These are mild diversions, but keep the pace of the game constantly moving forward. These diversions aren’t difficult and should be inoffensive to most.

While playing through Paper Jam, one word was going through my mind: solid. The game plays well, has great pacing, great art, and great music. It’s not the deepest RPG out there, but sometimes it’s nice having a lighter experience. One that calls back to a simpler time, where intuition is far more important that meditated planning. Aside from some button mashing and less-than-stellar mini-games, Paper Jam is worth a try for some good ol’ fashioned fun.