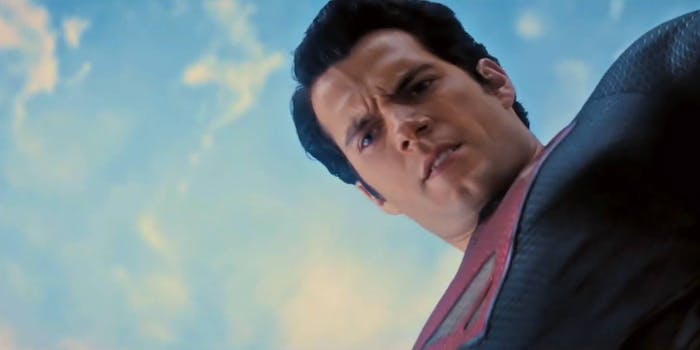 Is this how ‘Man of Steel’ would look if it were actually in color?

There are few comic book movies quite as divisive as 2013’s Man of Steel. While it brought moviegoers intense visuals and Dragon Ball Z-esque action, many fans felt that it crucially misunderstood Superman’s character.

Another seldom-discussed aspect of the movie has been its color gamut. Much like Christopher Nolan’s The Dark Knight trilogy, director Zach Snyder went for a very unsaturated and muted tone to the film. It was a cool twist on Superman, who has often jokingly been referred to as a boy scout.

YouTube channel Video Lab went back and reconstructed a few scenes minus all the dark and grainy filters. The results are remarkable.

Moviegoers had no idea as to what extent post-production affected the film. The two look like completely separate movies. Many are wondering if this strategy will work in contrast to Marvel’s visually brighter and more lighthearted superhero action flicks.

With next year’s release of Batman v Superman: Dawn of Justice, fans are cautiously optimistic.

While the side-by-side comparison is striking, there are already people raising questions about it. Color grading is tricky business, and Keith Mitchell over at Cinematic Ramblings wonders if VideoLab’s attempt to restore color to the film is accurate.

VideoLab itself seemed to agree with the critique, posting a lengthy response to the original YouTube post.

“We’re video editors and motion graphics designers, not professional film colorists. We stand by the editing, graphics, & points we make as being pretty solid for something that largely came together in a couple days. However, we won’t defend the color grading because we know it isn’t good. We’re amateur colorists and it’s impossible to put back color once it’s gone. It’s just an approximation. Plus, a film isn’t just a collection of pretty shots, it’s is a 2-hour experience and decisions like tone & color grading should only be considered in that context…

“Don’t mistake a goofy entertainment video for something more. It’s a silly and slightly misleading opinion piece that’s being analyzed through a lens of legitimacy it does not deserve or warrant. The fact that this video is so popular should serve as a testament to Man of Steel, not to us.”

Meanwhile the argument over stylistic color choices—and how they shade the final product—rages on.

Correction: This story previously stated the incorrect author of the The Dark Knight Returns comic. It has also been updated to reflect new information calling into question validity of the color comparison.