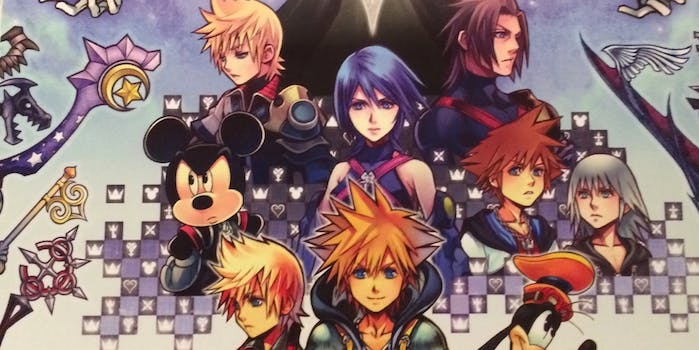 Kingdom Hearts 3 could have characters from Marvel and ‘Star Wars’

Just imagine getting to explore Tony Stark's Manhattan or Tattooine.

Few games have ever tapped into the collective id of its fans more completely than the Kingdom Hearts franchise. Because the cult hit is a collaboration between Disney and Final Fantasy studio Square Enix, the game allows fans to devise all kinds of interactions between characters who otherwise have no connection to each other.

And now, thanks to the magic of Disney’s purchasing power, fans who’ve been awaiting Kingdom Hearts 3 could find themselves exploring the worlds of Marvel and Star Wars.

Kingdom Hearts is the ultimate form of fanfiction in a way: an epic crossover wherein the player can interact with Mickey Mouse, Donald Duck, and Goofy, all while navigating the familiar worlds of Disney films and the universes of various Final Fantasy games, as well as Square Enix’s popular The World With You. The main character, Sora, journeys through the various lands interacting with characters in their own storylines, all while trying not to disturb the delicate balance of all the overlapping worlds.

But what if those worlds included Tony Stark’s Manhattan, or Tattooine? Kingdom Hearts director Tai Yasue has told Kotaku that “nothing’s off-limits.”

Basically, as Kingdom Hearts gears up for its first new release in a decade, the possibilities are endless: Mickey and the classic Disney cast could be joined by newer Disney characters like Anna and Elsa from the mega-hit Frozen. But the acquisitions of Star Wars and Marvel franchises mean that Anna and Elsa could also pal around with superheroes like Black Panther, Iron Man, and Black Widow. Ever wanted Pepper Potts and Princess Leia to team up with Mulan or Jasmine from Aladdin? It could happen.

While this may not seem like a huge revelation, it’s one that Kingdom Hearts fans have been wishing for since the moment Disney bought Star Wars. Kingdom Hearts and Kingdom Hearts 2 have sold over 20 million copies worldwide since 2002, and anticipation for the third installment is already high. With the expansion of the universe outside of the traditional Disney fandom, the franchise should appeal to even more fans, new and old.