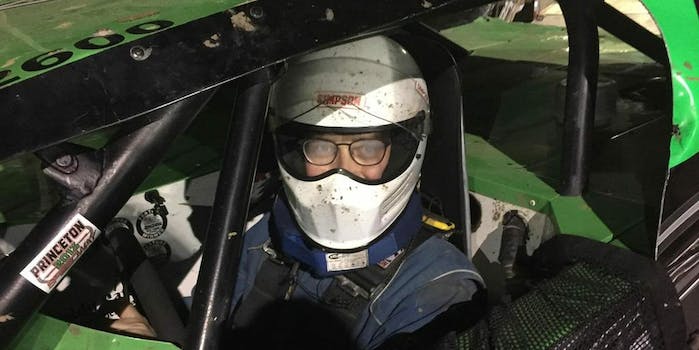 Who knew that young-adult author rivalries could go so hard?

The charity race took place in Princeton, Minnesota, and while car enthusiast Stiefvater thoroughly defeated Green, the latter writer gained some points for getting back into his car after it caught fire on the track.

GUYS THIS IS MY RACE CAR. pic.twitter.com/VKfp5rv2JA

Stiefvater was so fast that, after she finished crushing John Green’s racing dreams, she was asked to race the track’s team of professional drivers as well. She crushed them too.

In fact, not only did @mstiefvater beat ME at dirt track racing, she then raced local pro drivers and beat them as well. She is a genius.

The whole thing was documented on YouTube, including the moment when Green’s car caught fire. Next time a bestselling author tries to reassure people that their life is boring and unglamorous, we will totally refuse to believe a word of it.