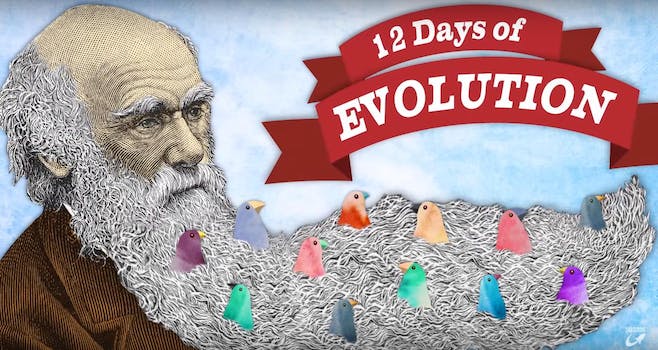 It's Okay To Be Smart/YouTube

It’s about celebrating something that's important for all of us.

Evolution is a tricky thing. We tend to think of it as something progressive, working toward an ideal, but evolution doesn’t really work that way. That’s just one of many misconceptions about it, but Joe Hanson of PBS Digital Studio’s It’s Okay To Be Smart is here to help.

Hanson is in the middle of his 12 Days of Evolution project. Taking place at the same time as the 12 Days of Christmas, he’s knocking out a misconception or covering a key idea about evolution each day leading up to Christmas.

The Daily Dot jumped on the phone with Hanson to talk about evolution, the boarder conversation about science in the U.S., and the importance of understanding how life as we know it came to be. Below is an edited transcript of that conversation.

What inspired you to make the 12 Days of Evolution series?

There’s just so much evolution to talk about. I could make six months of videos about evolution. From a scientist’s point of view, I just think evolution is worth celebrating. This is a time of year that you celebrate. It seemed to be a really natural fit. We just like the idea of splitting this up as something to experience throughout the holidays and get to know this awesome part of biology.

Why do it over the 12 days of Christmas?

It was definitely something I was aware of as we planned this. It’s not a distinction that I think people need to hold, and I really wish that more people wouldn’t think that these two things have to be at odds, necessarily. It’s not my job as a science educator, as a YouTuber, to tell people what to believe. I tell people what we know, and we’re really taking a positive approach here. We don’t deal with telling people what to believe, it’s about what we know.

Have you gotten any negative feedback for the series?

We read the comments. I’ve seen some natural responses. People have really passionate beliefs, I wouldn’t get in the way of people expressing those beliefs on either side. I do make sure nobody is being abusive and nobody is being hateful. Despite whether or not people agree with people who might attack on either side, we just try to keep it about what we know. Active discussion is great, but we want to make it safe and respectful.

I think one thing that we all have in common is we want to make sense of the world we live in. In my opinion, science is the best tool to do that—to understand the way things are. It’s not our place to tell viewers it’s the only way but I think it’s the best way.

How did you decide to attack each question?

Evolution is both very simple and very complex at the same time. It’s simple in that it describes everything, how everything that’s alive came to be. But it’s very complex that there’s very many separate parts of that. There are many exceptions and little oh-by-the-way moments we have to add. Because of that, people often carry a lot of misconceptions about the basic foundation. So I approach this as trying to arm people with information that we believe is correct, or keep them from developing these misconceptions.

How did you choose each video’s topic?

We wanted to first cover the basics about what evolution is. For example, what it means to have a random versus a nonrandom process. We talk about these huge, long scales of time, which leads many people to believe we haven’t ever witnessed evolution. We certainly see it every year with the flu virus and bacteria, but also with larger animals like crickets. Then there’s things that are super complex like the eye. Just because it’s built with intricacy, it can look like there is complex engineering involved. But these things can happen with small changes, and we know that very confidently.

Another thing people think is that we’ve never seen a new species arise. We’ve seen that a number of times.

Evolution is also not always about making things better. There’s some pretty funny instances of where evolution has been kind of dumb. Not everything, not every trait that we have or every living thing has is an advantage. sometimes things come along that we can’t really explain.

At some point, it’s less about survival of the fittest, but survival of the good enough. There are just so many little pockets where you can make weird observations about the world—and evolution, being very simple, can still explain these weird and wild complexities.

What do you think people misunderstand most about evolution?

There’s a discomfort I see that underlies a lot of these misconceptions, like being uncomfortable with things that are random, or being uncomfortable with things that take a long time. Our brains aren’t built to imagine the scale of millions of years. We can’t picture how long that is. We can make all kinds of visuals and metaphors, but you’re never really going to be able to picture a million years. As a result it becomes uncomfortable for people to think that they’re also part of nature; that they’re also an animal. These rules of evolution are OK to apply to a flu virus, but not to us, not to the food that we eat, not to these larger creatures.

Why is evolution an important area to cover?

That somehow we’re separate, that’s a big misconception. I hope to inspire people to correct on their own misconceptions; I can’t do it for them. That connection is really really important. When you realize you’re tied to nature, you’re better connected to it. Then, maybe you won’t throw away that plastic thing they put in starbucks cup. Maybe you’ll ride the bus because you realize you’re connected to the natural world around us, and you worry about what you’ll put in the air. It’s not a scary thing to be more connected to nature.

The quote that I opened the very first video in the series, ‘nothing in biology makes sense except in the light of evolution’—everything from molecules and proteins to DNA to the largest ecosystem, all of these things came to be and operate based on evolution. If you want to understand the science of life, evolution is the foundation underneath that house, and it’s all the wood and all the nails that hold it up too.

What do you hope your viewers take away from it?

One thing that anyone who makes videos or any teacher would agree on is that it’s impossible to be comprehensive and tell people everything they’re going to need to know. But I want to arm them with not only the curiosity to go out and learn more and to understand that this is a joyful experience. It sounds lofty, but I want to arm them from the beginning to get away from these misconceptions so they can get a better understanding of what it means to be alive. And hopefully by breaking things into these little bits, if someone asks them why the eye is that way, for example, now they have a tool. They can say, now I can share this with you and tell you why.

Can we expect more such series from It’s Okay To Be Smart?

We’ve certainly thought about it. There’s the fundamental laws of physics and all the different pieces pointing toward a grand unifying theory of the universe. There is sort of an ongoing series of videos about climate change and the effects on geology, air, water, and living things. That stuff we’ll continue to do.

Anything else to add?

I think that covers it. We want people to know we’re here to celebrate and we’re definitely here to make sure everyone can have a good discussion about it.

Screengrab via It’s Okay To Be Smart/YouTube