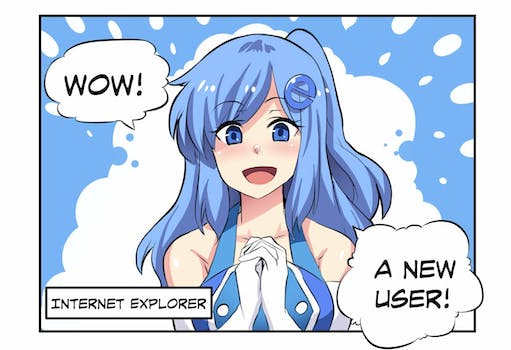 I'm not crying, you're crying.

Ever since browsers like Firefox, Chrome, Safari, Opera, and the rest of the crew showed up, Internet Explorer been left out in the cold. Even Microsoft, with its introduction of its Microsoft Edge browser, couldn’t wait to get rid of it.

But for many of us, Internet Explorer remains a holdover from the classic days of internet usage. It ranks with Netscape Navigator as one of the most archaic ways to look around online, and while Internet Explorer still functions, it’s by far the worst choice for internet exploring.

With that in mind, webtoon author and artist @Merryweatherey tweeted some adorable comics dedicated to the antiquated browser. No matter how irrelevant, the web browser is cute and endearing in human form. We can’t help but feel a little sad for her.

We’re first introduced to Internet Explorer as she greets a new user (the reader) who’s apparently opened up the browser. She’s ecstatic! She hasn’t seen a new user in so long and just wants to help. So she makes a few suggestions, but it appears that the internet user only wants to download Google Chrome.

I wrote a comic about Internet Explorer pic.twitter.com/puEFc1HD0y

That’s one of the first things many of us do when setting up a new Windows PC, so this hits close to home.

The next comic finds Internet Explorer trying to hang out with Firefox when she sees her out in public. Firefox rudely shoots her down, referring to her as an “old hag.” The feels!

I wrote a comic about Internet Explorer #2 pic.twitter.com/SfaORBrlde

The final comic from @Merryweatherey finds Internet Explorer reminiscing about the good old days when everyone wanted to use her to find all sorts of things on the internet. It’s right here I started feeling myself really tear up.

I wrote a comic about Internet Explorer (#3) pic.twitter.com/T6zms8iilU

It will be cool to see where the artist ends up taking the storyline for poor little Internet Explorer. If it means putting a smile on the little cutie’s face, I’m right back on board!