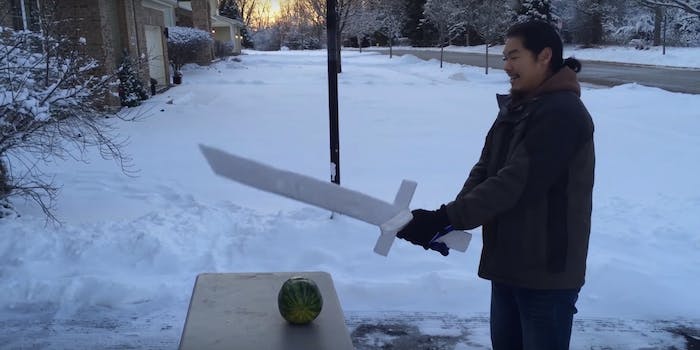 Winter is coming. Be prepared.

Metal and steel are no longer requirements to make an impressive sword.

Allen Pan, who created a replica of Mjolnir that only he can lift and builds other DIY weapons on his YouTube channel Sufficiently Advanced, always wanted an ice sword. Given the science involved, he knew that it wouldn’t be able to withstand major blows and hits without shattering—at least, not on its own.

Instead, Pan used a material called Pykrete, a mixture of sawdust and ice that’s tougher than pure ice, melts more slowly, and was used to build World War II aircraft carriers. He coated it in toilet paper so that the sword wouldn’t turn brown from the sawdust.

While his first test didn’t go as well, it all started going his way once he put a little more swing into it.

We might not need it now, but something like this sword would really come in handy during an apocalypse.