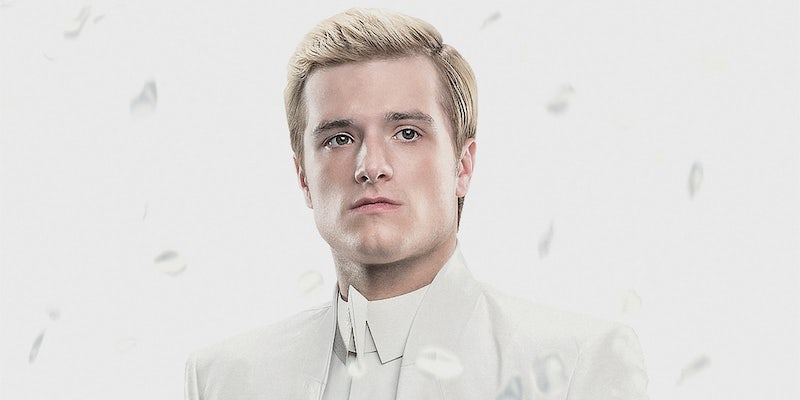 It's all a promotion for the movie, but it's totally drawing us in.

The Hunger Games movies have one of the best viral marketing campaigns on the Internet. Instead of just grudgingly admitting that their fake fashion magazine Capitol Couture is surprisingly good, you actually find yourself wanting to read it.

When Capitol Couture last updated, it was posting a series of beautiful propaganda photos of representatives from each of Panem’s 12 districts. Now the magazine is getting a little more personal, with profiles of Peeta Mellark and Johanna Mason, both of whom were captured at the end of the last movie.

The assumption is that most people checking the Hunger Games tie-in websites will already know what happens from the books. So while these glimpses of Peeta and Johanna aren’t exactly spoilery, they’re still a lot more creepy if you know the context from the books.

In the new update, both former Hunger Games tributes are shown as silent “living portraits,” modeling the all-white outfits we saw in the first teaser trailer for Mockingjay Part 1. They’re basically being used as dress-up dolls for Capitol fashion, and mouthpieces for President Snow’s anti-rebellion message of “One Panem.”

The genius of Capitol Couture is that it works on several different levels. Obviously we know that it’s there to advertise the movie, but it also does an excellent job of providing some additional worldbuilding and propaganda that supports the oppressive Capitol regime.

Peeta and Johanna—who in the previous movie were rebellious allies of Hunger Games protagonist Katniss Everdeen—have clearly been brainwashed into a state of blind patriotism for Panem. Those sterile white outfits are hardly what they’d ordinarily choose to wear, and Peeta doesn’t even speak during their Capitol Couture interview in President Snow’s office.

Of course, underneath this kind of storytelling, Capitol Couture is also a blatant attempt at product placement. Most of the costumes are from carefully chosen designers from the real world, with Peeta wearing menswear by Maison Martin Margiela, a label known for using unusual materials in their designs. Another one of the new Capitol designers is Mary Katrantzou, a very appropriate choice since she regularly creates intricate “wearable art” with printed patterns based on household objects or architecture.

The reappearance of Peeta and Johanna bridges the gap between Catching Fire and Mockingjay, Part 1, effectively putting the film’s audience in the place of “real” Panem citizens. Until Mockingjay shows us the next stage of the Panem revolution, we only get to see these characters through the controlled, biased lens of the Capitol.