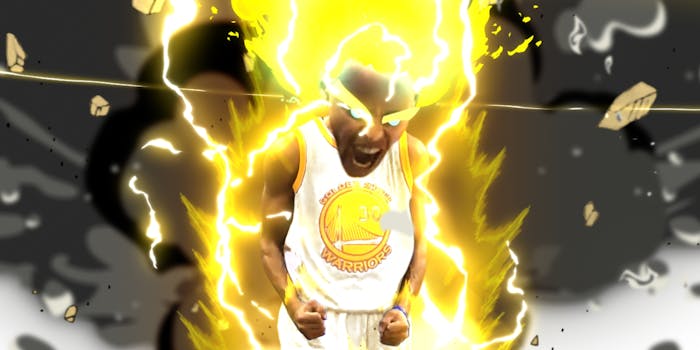 How the Steph Curry Super Saiyan GIF was made

Given the right set of circumstances and appropriate emotional triggers, athletes can push themselves to another level often called greatness. In anime culture, this phenomenon is know as going “Super Saiyan.”

I made a GIF of Steph Curry going Super Saiyan in Game 4 of the NBA Finals.

“I watched a lot of Dragon Ball Z as a child and enjoyed playing the fighting game they had on SNES,” Hwang told the Daily Dot in an interview via Reddit. “I think the most enjoyable and iconic parts of Dragon Ball Z for me are the Super Saiyan transformations. It felt like it would take weeks and months for each character to power up, but once they finally did… so much power.”

The Herrera GIF was created by former Disney artist Adam Phillips who whipped up the animation in 115 minutes, according to an interview he did with Slate last year.

The animation is part of the Internet’s obsession with all things Dragon Ball Z, including “Super Saiyans Are Real,” “It’s over 9000!,” and “This isn’t even my final form.”

“Dragon Ball Z is a series that instills a message in its audience that if you work hard enough, you can accomplish anything,” said Derek Padula, author of Dragon Ball Culture, in an email to the Daily Dot. “So the reason that the Internet loves to make people go Super Saiyan is because it represents our own ideals and what we strive for. It’s that moment where we power up, push hard, and attain success.”

Hwang’s first GIF was of James following Game 2 of the NBA Finals. The animation received a moderate amount of attention on Reddit’s r/SuperSaiyanGifs and r/HighQualityGifs.

“A day after posting my first Lebron GIF, another user told me that someone had submitted my GIF to Imgur where it had reached 1 million+ views,” Hwang said. “I thought that people would like it, but 1 million people in one day?? I was amazed and incredibly grateful that so many people had decided to look at my GIF.”

Hwang’s next Saiyan GIF was of Curry following Game 4. He used Adobe After Effects, Adobe Photoshop, and Adobe Illustrator to meticulously create the effect. Here’s a detailed explanation of how Hwang crafted his masterpiece:

It all starts with picking out really great and emotional shots. I feel like these GIFs make themselves if the shot shows enough emotion.

After I’ve got my shots picked out, the long and grueling process of rotoscoping begins. Rotoscoping involves, essentially, tracing the outline of Steph Curry for every single frame of the animation. Each of these GIFs are 5 seconds long and playback at 29.97 frames per second. This results in requiring 150 individual frames that need to be traced by hand. Using the application “After Effects,” this process has taken me anywhere from 4-6 hours for each GIF.

The finished result of rotoscoping is a “cutout” of Steph Curry from his environment. This cutout gives me the ability to layer effects/animation above and below him in the scene. Whether it’s an explosion the background or lightning pulsing through him. The animation and effects themselves are created through a variety of means, including animated toolkit elements, rotoscoped frames from the actual television show, hand-drawn animation, Googled images, and any other resources I’ve been able to find on the web.

Hwang’s Curry GIF was an instant success. It reached the front page of Reddit’s r/funny and has collected more than 700 comments across six different subreddits.

“[B]ased on these comments you are one of the kindest and grateful redditors I’ve ever seen,” Reddit user hsjester commented. “Awesome gif, I hope you continue to work hard considering how talented you are. Go warriors!”

Despite all of the Reddit attention, Hwang has yet to be contacted by anyone from the NBA or ABC, which is the network airing the Finals. He has landed a few job offers.

“I’ve been completely floored by the response and it doesn’t really feel like this is all happening,” Hwang said. “I think it shows that Dragon Ball Z still lives strong in the hearts of its many fans. I feel like Super Saiyan transformations are something that anyone can relate with.”

Hwang is currently working on a GIF from Game 6 Tuesday night and hopes to post it on Reddit soon.