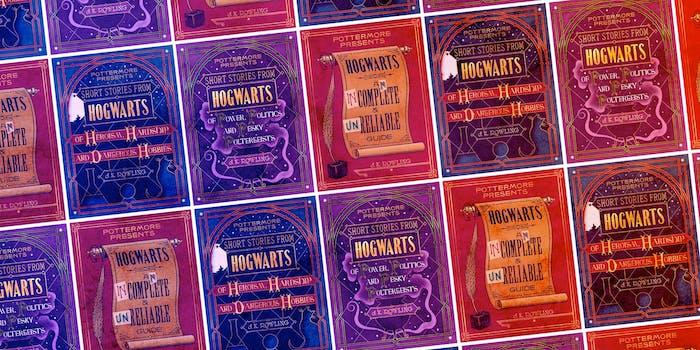 Fans will be able to explore more of Harry's world.

Just weeks after Harry Potter and the Cursed Child’s release, Pottermore revealed that more Harry Potter books are on the way for ebook readers.

First reported by the Bookseller, the series of short ebook stories titled Pottermore Presents will detail certain elements of Harry’s wizarding world and life at Hogwarts with original writing from J.K. Rowling and book covers designed by Miraphora Mina and Eduardo Lima, who worked on the artwork in the Harry Potter films. Unlike the original Harry Potter series and tie-in books Fantastic Beasts and Where to Find Them, Quidditch For the Ages, and The Tales of Beedle the Bard, the new Pottermore Presents will only be available in ebook form.

“Pottermore Presents is a series of bite-sized eBooks that dig deep into the Harry Potter stories, with titbits taken from Pottermore’s archives and original writing from J.K. Rowling,” says an announcement on Pottermore. “The series offers Harry Potter fans added insights into the stories, settings and characters and were all lovingly curated by Pottermore.”

Pottermore’s website and book listings on Amazon, Barnes & Noble, and Apple’s iBooks store provide details on what to expect from the books. Hogwarts: An Incomplete and Unreliable Guide focuses on Hogwarts and its inner workings, such as its ghosts and the Sorting Hat. Short Stories from Hogwarts of Power, Political and Pesky Poltergeists zeroes in on the Ministry of Magic, some of its troubling history, and new writing about Professor Horace Slughorn. Short Stories from Hogwarts of Heroism, Hardship and Dangerous Hobbies is about the characters we love, with more information on Professor Minerva McGonagall, whose life story you can find on Pottermore.

If the material from Pottermore Presents looks familiar, there’s a very good reason for that. Much of it has been taken straight from Pottermore’s website and being printed in ebook form as a simple way for fans to read and digest information.

“We also recognize that not all Harry Potter fans who want to read more about the wizarding world visit pottermore.com so we’ve developed Pottermore Presents to to reach those fans through other channels,” a Pottermore spokesperson told the Bookseller.

The Pottermore Presents ebooks will be released Sept. 6 in eight different languages at the cost of $2.99 each.