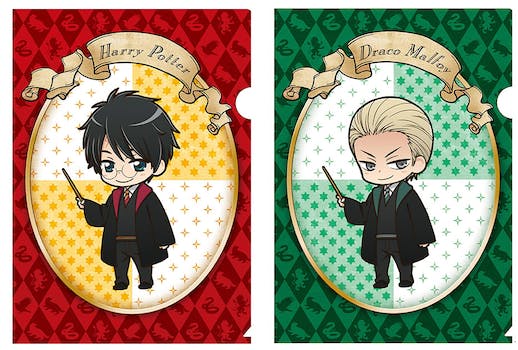 Harry and his friends look great as pint-sized anime characters.

For the first time ever, Warner Bros. has licensed official Japanese chibi art versions of Harry Potter characters, and as you can see, the whole world profits: These adorable cartoon figures aren’t from an anime version of the HP series; rather, they’re a popular Japanese art style known as “chibi,” which gives characters exaggerated childlike features popularly known as “super deformed” or “SD.”

Warner Bros. has authorized the chibi art to be sold in a series of 12 plastic cards, similar to trading cards. Each card retails for 378 yen, or about $3. They’re currently available, along with more traditional Potter merchandise, from several online Japanese retailers, including Froovie and Moovic.

We’re sad to note that you won’t see any Ravenclaws or Hufflepuffs in this initial collection. What’s more, apart from Hermione, the women of the Harry Potter series are conspicuously absent. For instance, Dumbledore is here, but not McGonagall; James Potter is here, but not actual hero Lily; and the Weasley twins are here, but not Ginny. Each of these pairs of characters generally gets equal time in the books relative to one another—and while Hedwig and Buckbeak are cute and all, we’re pretty sure Luna Lovegood, Fleur Delacour, and Cho Chang all had more to do with the plot.

Still, hopefully more art like this is on the way. RocketNews24 reports that Warner Bros. plans to expand the product line later this year to feature the same sets of characters on new items like pins, rubber phone straps, and acrylic keychains. And if fans make enough noise over the new designs, more will almost surely follow.

Take a look at the full set: