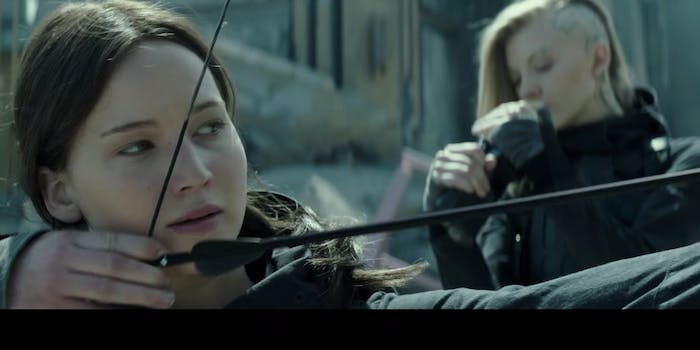 In the months leading up to the release of the final Hunger Games film this week, the Harry Potter Alliance has been taking Katniss‘s message of resistance and activism to social media. As they did last year, the fandom activist group has launched #MyHungerGames to campaign for economic equality and mental health awareness.

Odds In Our Favor

Like last year, the group’s focus is on encouraging supporters and followers across various social media platforms to share real-world stories of income inequality and its impact on the lives of real people. Fans have been sharing accounts of staggering student loan debt, poverty, and other sobering reminders that in real life, the odds aren’t ever in our  favor.

#MyHungerGames is the *years* I spent paying out of pocket for medication BC my insurance company wouldn't cover it.

Hunger Games actor Jack Quaid came on board for the project, encouraging fans to join the revolution:

To show their support for the campaign, fans have made everything from fanart to playlists. One chapter of the HPA, the Missoula Ministry of Magic, plans to curate a gallery of stories gleaned from the hashtag at the group’s local art gallery. Fans have also been sharing selfies holding up The Hunger Games‘ famous three-finger salute, a gesture that’s become a global symbol of resistance.

70% of US kids in jail struggle with mental health & don’t get help.
Take action with #PrisonKids & #MyHungerGames: https://t.co/PAhl6Nix9E

"My mom was in and out of jail… because that's where you end up when you need help" –@cassidykirch #MyHungerGames https://t.co/9PsxJdUgTo

Fan activism through the campaign has been fueled by the recent announcement of a planned Hunger Games arena-styled theme park in Dubai. As any fan of the books and film franchise can tell you, a theme park celebrating the brutal dystopic society of Panem is exactly the sort of excess to which the story itself is diametrically opposed.

@lionsgatemovies “What would Suzanne Collins do?” She’d probably only open a park if proceeds went to ending world hunger #MyHungerGames 2/2

Will the park staff get to experience the District 12 diet as well? #MyHungerGames https://t.co/ExYKaBfczM

As the hashtag has gained steam, it has become a mantra for general issues of inequality, with campaigners using it as a sounding board to discuss everything from environmental concerns to the plight of Syrian refugees.

Harry Potter Alliance spokesman Jackson Bird told the Daily Dot via email that the campaign was a joint project with a number of other activist groups intending to “[take] back the narrative—away from theme parks and other bad marketing decisions and back towards the true message of inequality and injustice.”