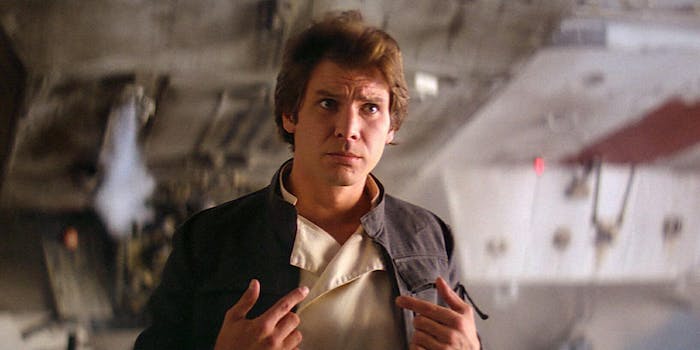 The book takes place over three periods in Han's life.

As with every new Star Wars movie, Solo: A Star Wars Story brings the usual deluge of new tie-in materials. The novel Last Shot is one of the most exciting, focusing on Han and Lando’s relationship. Written by YA/fantasy novelist Daniel José Older, it takes place over three time periods: “When Lando owned the Falcon; shortly after Han takes ownership of the hunk of junk; and not long after the Battle of Endor.” It’s also a rare look at Han Solo’s role as a father.

You can read an excerpt on the Star Wars site, which paints a cute picture of Han Solo with baby Ben. You get the impression that Han is already uncomfortable with his status as a war hero, avoiding his “General” title while fielding messages for Leia. It’s a pretty adorable image:

“Hngh . . .” Han Solo woke with a tiny foot in his face and an irri­tating droid voice in his ear. “What?” The tiny foot was attached to the tiny body of Ben Solo, mercifully sleeping for what seemed like the first time in days. Han’s eyes went wide. Would the boy wake?

“What? No!” Han sat up, still trying not to move Ben too much. He was shirtless, and his hair was almost certainly pointing in eight different directions. He probably had crust on his face. He didn’t much want to talk to Mon Mothma under regular circumstances, let alone half naked and bedheaded.

“Leia?” a voice said as the room lit up with the ghostly blue holo­projection.

Ben stirred, kicked Han once in the face.

The new Solo books will probably steer clear of detail on Ben’s childhood, to avoid overlapping with Episode IX. However, we may learn more about Han and Leia’s marriage. There’s a huge gap between Return of the Jedi and The Force Awakens, although baby Ben Solo did appear in the tie-in novel Aftermath: Empire’s End.

Maybe Last Shot will show us more of Han’s domestic side—and even what Lando was like as an uncle. We’re guessing he’s the kind of guy who shows up every few months with a bunch of expensive presents, looking annoyingly refreshed compared to the exhausted parents.

Last Shot is out on April 17, a month before Solo.