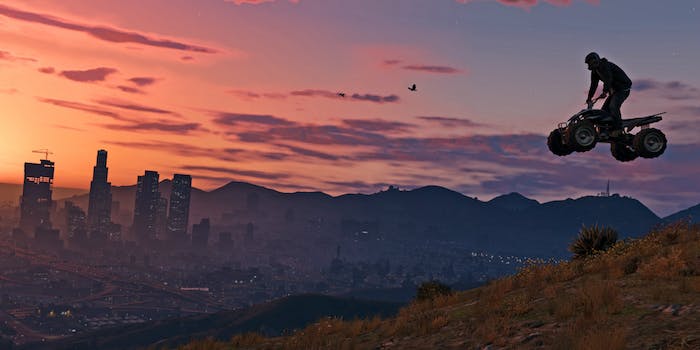 GTA V on the PC is going to be a significant improvement on existing versions.

Purported images of Grand Theft Auto V’s PC version suggest the game could ship on seven discs. Games haven’t commonly shipped on that many discs since the first full-motion video games in the 1990s.

Rockstar Games in January disclosed the required hard drive space for the PC version of GTA V as 65gb. Our installation of The Elder Scrolls Online stands at a little over 41gb, and the physical edition ships on four discs. Seven discs for 65gb is reasonable, and especially in light of new information about a native video editing suite that comes packaged with the PC version of the game.

A trailer that runs at 1080p resolution and 60 frames per second, released on April 2, has already made clear the improved visual quality of GTA V on PC, compared to the PlayStation 4 and Xbox One versions. Anything other than a marked visual upgrade, considering how good the game already looks on current-gen consoles, would infuriate the PC gamer crowd. This is an audience that wants developers to push the boundaries of what existing hardware can handle.

It’s difficult to convey just how much better the PC version of GTA V looks unless you can watch the trailer with the most updated browser on a monitor that can handle the 1080p resolution. If you can, you will see the difference in quality immediately. Given the right hardware, GTA V can also run at 4K resolution and also at 60 frames per second. Those are some golden numbers for the PC gaming crowd.

What could make the PC version of Grand Theft Auto V the definitive version goes beyond graphics. GTA V has already provided countless hours of YouTube fodder. Creating those videos requires capture cards or special software. PC Gamer reports that the PC version of the game will ship with a native video editor. In other words, players of GTA V on the PC will require nothing other than the game itself to produce the same sort of game clips.

In a day when the sharing of game footage via YouTube and social media tools is becoming such a visible and important part of the cultural landscape of the video game world, the potential significance of native video capture and editing tools, in an open world game as dense with possibilities as Grand Theft Auto V cannot be overstated.

Between the download size, the level of visual improvement, and native editing tools, seven discs doesn’t sound outrageous in the least.