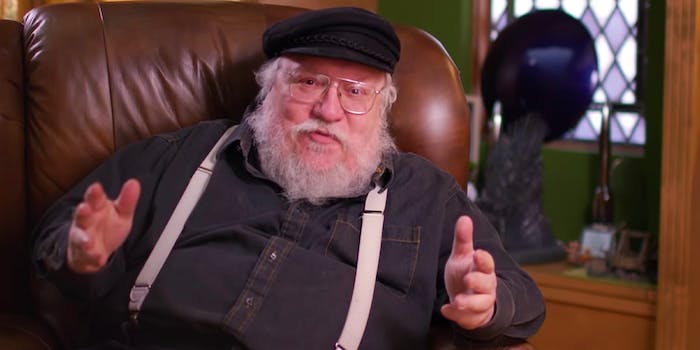 George R.R. Martin on the influence Gandalf’s death had on ‘A Song of Ice and Fire’

Game of Thrones (and A Song of Ice and Fire, the series on which it’s based) has a reputation for being a ruthless killing machine, often offing the characters we love in its most gut-wrenching moments. Well, you can blame one of fantasy’s greats as for why that’s become a signature George R.R. Martin move.

Martin sat down for an interview for The Great American Read, a PBS eight-part series that looks at the different themes and connections in 100 novels beloved in the U.S.; it also includes a wide-scale vote to determine the “Great American Read” among 40 popular and beloved works. A Song of Ice and Fire is among the choices, as is one of Martin’s influences, The Lord of the Rings trilogy.

In the interview, Martin praised J.R.R. Tolkien for what he was able to accomplish. While Martin always loved reading, he was enthralled with the world and stories Tolkien created, an immersive world supported with backstory and thousands of years of fictional history. But as he read The Fellowship of the Ring for the first time, he was floored by Gandalf’s death

“I can’t explain the impact that had on me at 13,” Martin explained. “You can’t kill Gandalf. I mean, Conan didn’t die in the Conan books, you know? Tolkien just broke that rule, and I’ll love him forever for it.”

The effect was instantaneous for Martin, one that he carried into his work. Killing Ned Stark, one of the main protagonists of A Game of Thrones, early on set the stage as Martin went through his arsenal of characters—mentors, guardians, the sick and the healthy, sons and brothers seeking revenge, and the wicked—without showing any mercy.

“The minute you kill Gandalf, the suspense of everything that follows is a thousand times greater, because now anybody could die,” he added. “Of course, that’s had a profound effect on my own willingness to kill characters off at the drop of a hat.”

But as much as Gandalf’s death influenced him, Martin has described Tolkien bringing him back from the dead—as Gandalf the White in The Two Towers—to be “a little bit like a cheat.” Still, the death itself forever set the course of Game of Thrones.

You can vote on the “Great American Read” until Oct. 18.