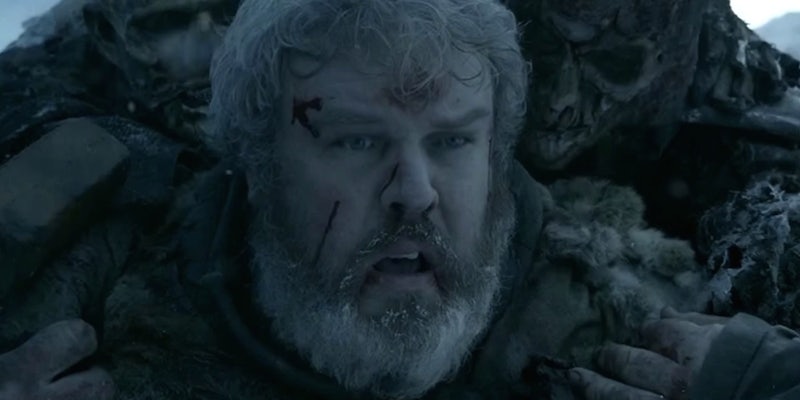 Warning: This article contains spoilers for Game of Thrones and A Dance With Dragons.

Game of Thrones will be missing two characters who have been there from the very beginning next season according to one of the actors.

Kristian Nairn, who plays the lovable giant Hodor, is in the middle of traveling through Australia on his Rave of Thrones DJ Tour (which is an actual thing). He did an extensive interview with Yahoo! News, and naturally the reporter asked him about the status of season 5 and his role in it.

“We [Hodor and Bran] have a season off and we have a year’s hiatus, solely because I imagine our storyline is up to the end of the books,” Nairn said. “So, I get my year off now to do Rave of Thrones and gallivant all over the world.”

It’s the latest change for a series that’s increasing strayed away from the books, and naturally some fans are upset about Bran Stark and Hodor being cut from the new season.

What the fuck is this shit about Bran and Hodor. UP WITH THIS, I WILL NOT PUT. #GameOfThrones

So apparently Hodor won’t be in the next season of GOT. That’s like having a new season of spongebob, but not having Patrick in it…

yo, no hodor, but i wanna put u in a backpack and walk to another country with u #NOHODOR

As last season’s exclusion of a minor character showed, people are passionate about the books they read and care immensely about how they are adapted. And while it’s easy to get upset about no Bran or Hodor next season, it may end up being a good thing in the long run.

Last we saw them in the show, Bran, Hodor, and Meera Reed just escaped a number of skeletal Wights with the help of Leaf, one of the children of the forest, and finally met the Three-Eyed Raven under the Weirwood tree. Jojen, who traveled with them, was dead.

As it’s been noted before, Bran’s story in Game of Thrones has been sped up tremendously compared to other characters in A Song of Ice and Fire. At the end of season 4, he only has one more chapter in the entire book series that hasn’t been adapted to screen (excluding characters that have been been excluded from the script so far like Coldhands).

In that lone chapter, Bran uses weirwood trees to look into the past, present, and future—with some appearances from characters lost—and wakes up his green-seeing abilities with help from the Three-Eyed Raven. When he’s not doing that, he possesses Hodor to explore the caves around him. Meera spends that chapter trying to keep up the spirits of Jojen (still alive at this point), who’s becoming increasingly depressed.

Bran’s entire story, to date, is finished by page 460 in the American hardcover version of ADWD, a book that’s more than 1,000 pages. Even with the show’s pacing, it’d be hard to stretch that chapter out for a season. If the writers decided to keep Bran and Hodor (and presumably Meera, who wasn’t mentioned at all in the interview) in season 5, they’d run out of original book material and would be left with a couple of choices for season 6: ask George R.R. Martin what happens next, or make it up themselves.

Either option would be disastrous for the book fans. If David Benioff and Dan Weiss got more info from Martin, they would cry foul at book spoilers appearing in the show. If Benioff and Weiss diverted from the books (even plot points that have yet to happen), the fans would be upset at them for not being faithful. They can’t win.

By excluding Bran and Hodor from season 5, they can focus on other important plot points like Dorne, and when the story returns to that Weirwood tree, the writers can throw in a line about how Bran has been training. We’ll get less fluff stretched out too thinly for a storyline that not many people like in the first place, while getting to watch those important flashbacks (with hopefully a much-wanted cameo thrown in). It’s the least-terrible option in the long run.

Interestingly enough, another Stark sibling who’s almost run out of fresh book material is getting an entirely new storyline in season 5 instead of a hiatus, or going the way of Rickon, who hasn’t been seen since the end of season 3.

“Game of Thrones is so unpredictable and it was a big surprise what is happening to her this season,” Sophie Turner, wo plays Sansa, told HitFix. “I am so excited because it gives me the opportunity to work with new people and it goes in a completely different direction. I think the fans will really like where her storyline is going this season.”

Of course, there are people who think that Bran may show up after all. Nairn doesn’t actually say that Bran will be out, using “we” in the interview (with Yahoo inserting Bran’s name in brackets). Reddit’s r/asoiaf points to an interview with Collider from last month that seems to suggest otherwise and that Nairn might be referring to Meera instead.

Isaac, are you excited for what is coming up on Game of Thrones?

HEMPSTEAD-WRIGHT: Yeah. There’s certainly some more action stuff, rather than sitting down in various forests, all over Westeros.

When do you start shooting the new season?

Granted, Hempstead-Wright could be talking about the season in general and not specifically what his character will be doing, employing a classic actor tactic of being both vague and evasive in answering the questions.

Nairn hasn’t said anything about his comments on Twitter, and HBO isn’t commenting, so we’ll have to wait to see if Bran will be missing just like Hodor.