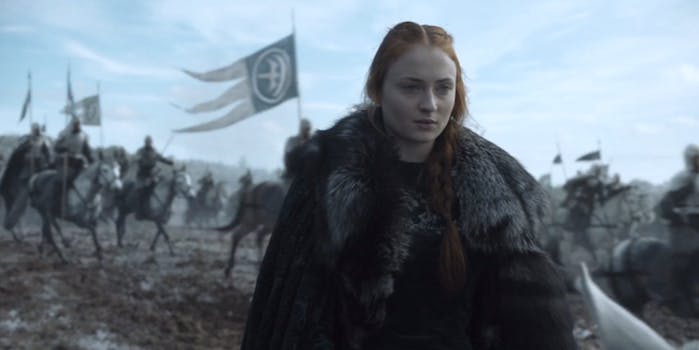 He doesn't buy it.

One of the most persistent fan theories in Game of Thrones’s wildest season to date has gotten an old-fashioned debunking from one of its stars.

In an interview with the Huffington Post on Tuesday, Liam Cunningham—who’s played the ever-loyal right-hand man Ser Davos Seaworth since the second season—was asked about the possibility that Sansa Stark was pregnant after her marriage to Ramsay Bolton (one in which he regularly raped and tortured her). While the idea has been floated for months, this time it referenced Ramsay telling Sansa, “You can’t kill me, I’m part of you,” right before his starved dogs devour him.

Cunningham, for one, wasn’t having it.

“Unless he’s got one of those Game of Thrones pregnancy sticks, he’s not gonna know,” Cunningham said. “I think, I would imagine, it’s open to whatever you want it to be, but I think he’s saying he’s put himself into her head. That’s what I took from it. She’s never gonna get rid of him because of what he’s done to her. He knows what he’s done to her. It was off camera, what he was doing to her, but we all know what it was. But I think he’s placed himself in her soul for all the wrong reasons.”

The theory’s existed in one form or another since February when the first batch of official Game of Thrones photos were released online, and fans focused on one particular photo of Sophie Turner as Sansa in which her heavy dress billowed out a bit. Some jumped right to the pregnancy theories while others surmised that she might just be wearing a bunch of layers since her escape from Winterfell was premeditated. Another photo had a different angle and Sansa appeared to be fine (and not pregnant).

The theories resurged in “The Door” (the same episode in which Hodor died) after Sansa confronted Littlefinger. She ripped him a new one for handing her over to a monster like Ramsay and makes him say what he thinks Ramsay did to her during their marriage.

While Sansa was referencing the trauma that stayed with her following an abusive and violent marriage, the theories persisted. Despite Sansa’s talents with a needle being a long-established character trait, some took her new Stark outfit and her reaction to the food at Castle Black—which Dolorous Edd admitted isn’t that great—as more signs that Sansa was pregnant.

As Vanity Fair points out, the general timeline of Sansa’s Game of Thrones plot stretches months. She jumped off the walls of Winterfell into the snow and went through hell to get to the Wall, a journey that definitely takes more than a day or two. After regrouping with her recently resurrected half-brother, she traveled to at least two Northern Houses to recruit men to the cause and headed over to Winterfell, where she stayed for a number of days (or maybe even weeks) before the Battle of the Bastards occurred. It also takes time for Sansa’s raven to reach Littlefinger and for the knights of the Vale to travel from Moat Cailin to Winterfell, despite jokes that Littlefinger uses a teleporter. Plus the constant scrutiny over whether Sansa is pregnant undermines the psychological effects of rape.

Cunningham isn’t alone in interpreting Ramsay’s words to Sansa in a more metaphorical way, and some have also debunked the pregnancy theories

“He just gets under her skin, and he violated her in such a terrible way,” Turner told Entertainment Weekly. “He’s imprinted on her, mentally and physically. She can never get that part of her back again.”

Iwan Rheon, who played Ramsay for years, called the Sansa-is-pregnant theories “people reading into it too much” and felt that Ramsay’s words were more about the psychological effects on Sansa.

“What he’s saying is that no matter what happens, what he’s done to her, very much like what he did to Reek—to Theon,” Rheon explained to the Daily Beast. “Theon will never be able to shake off the horror that he’s been through and the mental and physical torture. So in the same way, he’s saying to Sansa, ‘I’ve put my mark on you now. For the rest of your life, you will always remember the horror of the time you’ve spent with me.’ It’s a very arrogant thing to say, but it’s probably quite true. ’Cause how would somebody forget that?”

Plus, Sansa debunked it herself. With Ramsay’s death, the Bolton line is gone.

Will this be the end of these theories? Doubtful, but Sansa’s got much bigger things to do.