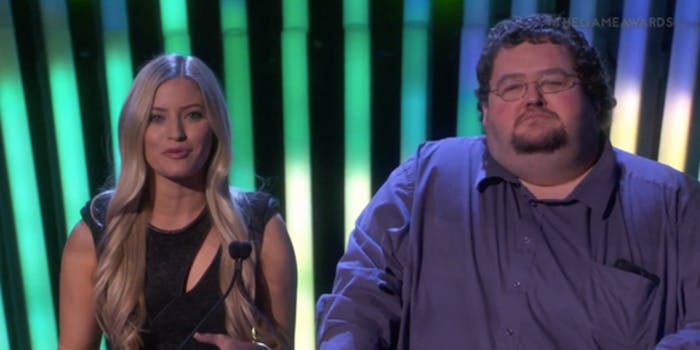 On and off stage at the 2014 Game Awards

This was the first video game award show not hosted by Spike TV.

The Game Awards kicked off for the first time last night.

Game journalist veteran Geoff Keighley organized this entire event to celebrate the past year in gaming, and give respect to the industry he’s been covering for the past 20 years. He coupled the award show with some world premieres as well.

Much like the Oscars, the Game Awards were picked by a jury of veteran game journalists from various publications. The advisory board was made up of heads from every major video game manufacturer and publisher. This was clearly an awards show by the industry, with no non-industry actors trying to grab a slice of the pie.

The show started off with game composer Koji Kondo playing the classic Super Mario Bros. theme on a grand piano. It was something unexpected. Many are accustomed to game awards shows that feature Linkin Park playing some rap-rock song nobody cares about. 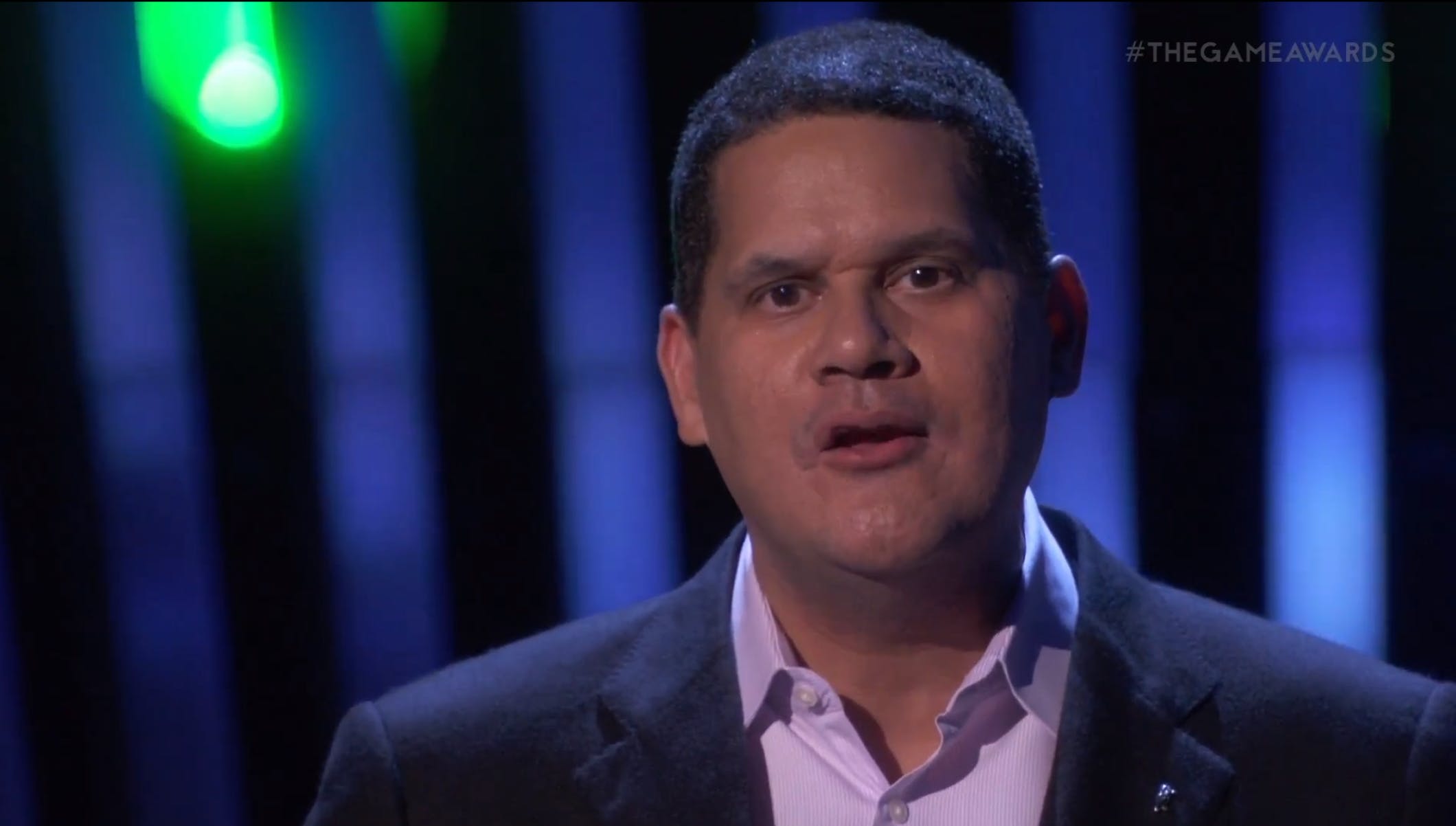 Interestingly, the first presenter wasn’t some major celebrity, but a CEO. And not just any CEO, but the CEO of Nintendo of America, Reggie Fils-Aime. He used his time to introduce Shigeru Miyamoto and show off Mario Maker.

If you haven’t heard of Miyamoto, he’s pretty much the Walt Disney of video games. He created Mario, Zelda, and Donkey Kong. Someone with that pedigree was a nice addition to the Game Awards.

Next up on stage was Kiefer Sutherland. Yes, the dude from Fox’s 24. Sutherland will be voicing Snake in the upcoming Metal Gear Solid 5. He moved away from the teleprompter to give a great monologue on the innovation that’s been taking place in the games industry. He believes that in the past decade, Hollywood really hasn’t innovated much. In contrast, the games industry has evolved dramatically in a very short period. It was a very nice point of reflection. 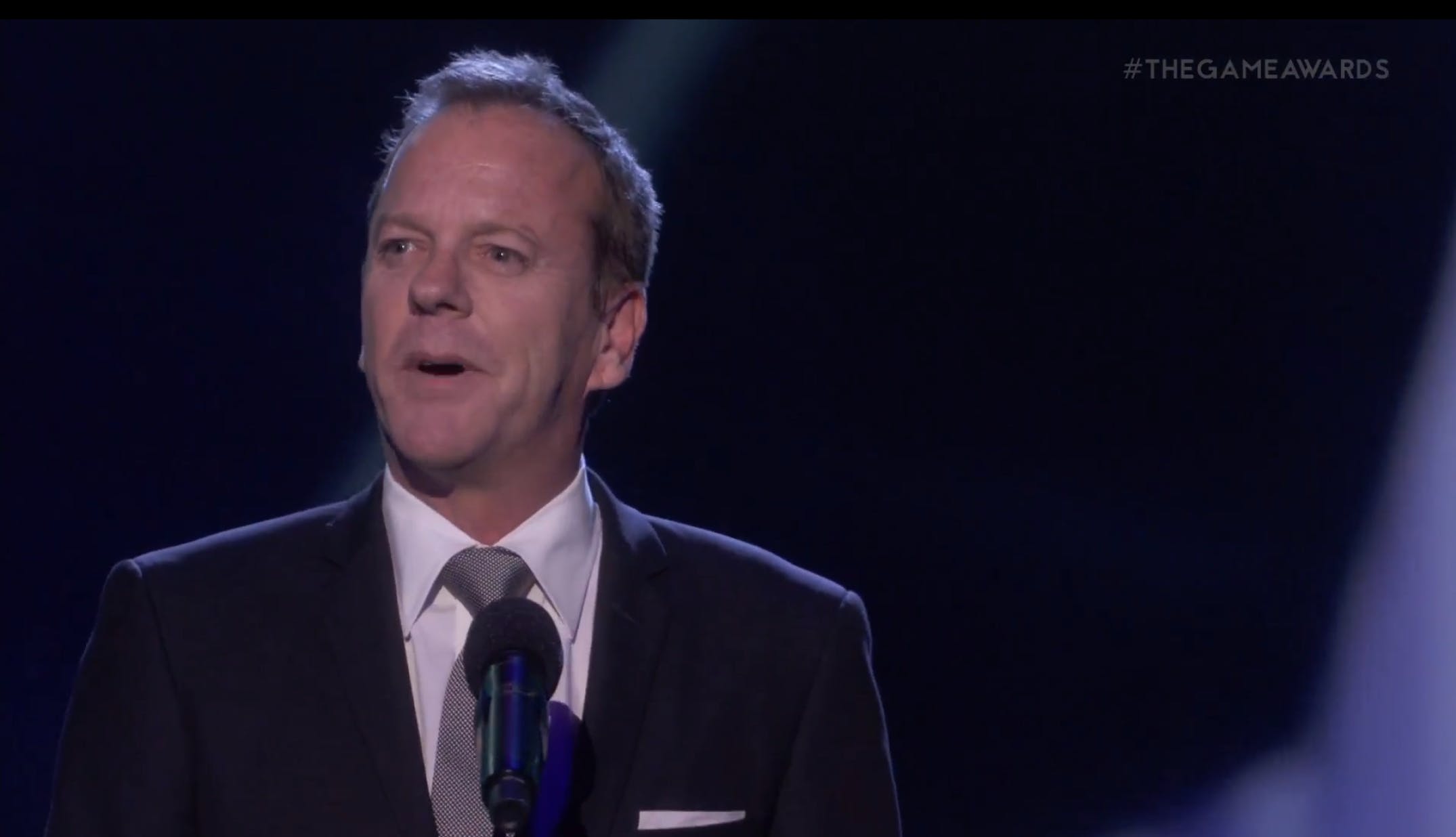 Up next, the very funny Tim Schaefer went up on stage to give the award for best performance. There were some very impressive names on the short list, from Kevin Spacey to Troy Baker. Ultimately the award went to Trey Parker for his various voices in South Park: The Stick of Truth. 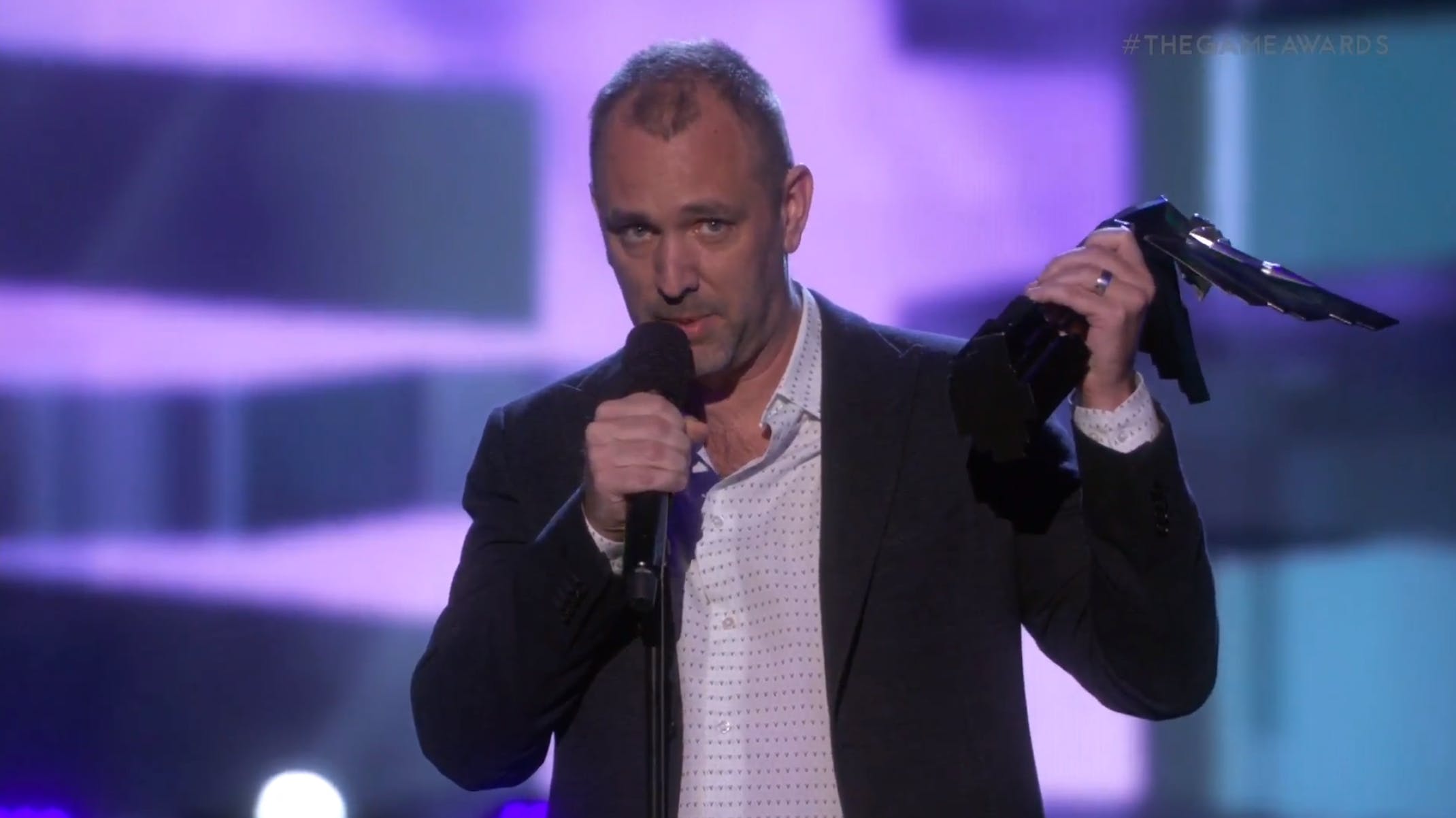 A very odd award, “trending gamer,” was given by YouTubers iJustine and Boogie2988. The award was to celebrate the best YouTube video game personality of the year. This award was not voted on by the jury, but by fans online. 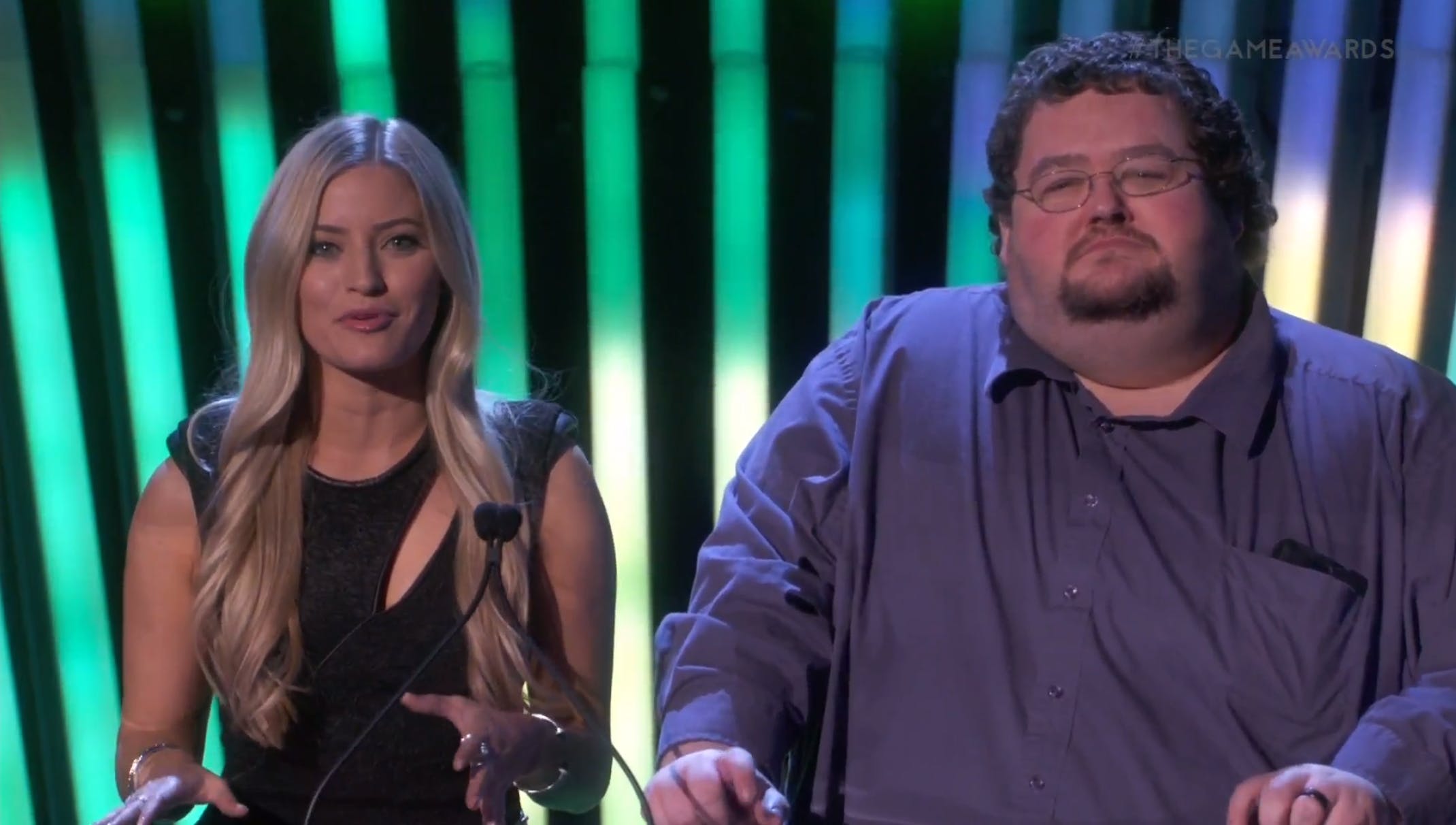 The award went to Total Biscuit, which is not totally surprising considering how much love he gets on /r/games. He did beat out the super popular PewDiePie.

It was odd to show this award given on stage while other awards were given off stage. For example, the award for best fighting game went to Fils-Aime on the side stage for Super Smash Bros. for Wii U. That’s a huge award, but not one big enough for the main stage, apparently.

The pacing of the show was a bit disjointed. At 45 minutes in, only two awards had been given on stage, while most time was reserved for new trailers.

Conan O’Brien was also showing off all of the Game of the Year award nominees. Sadly, he wasn’t there in person: He recorded segments at his studio, which were then peppered throughout the show. 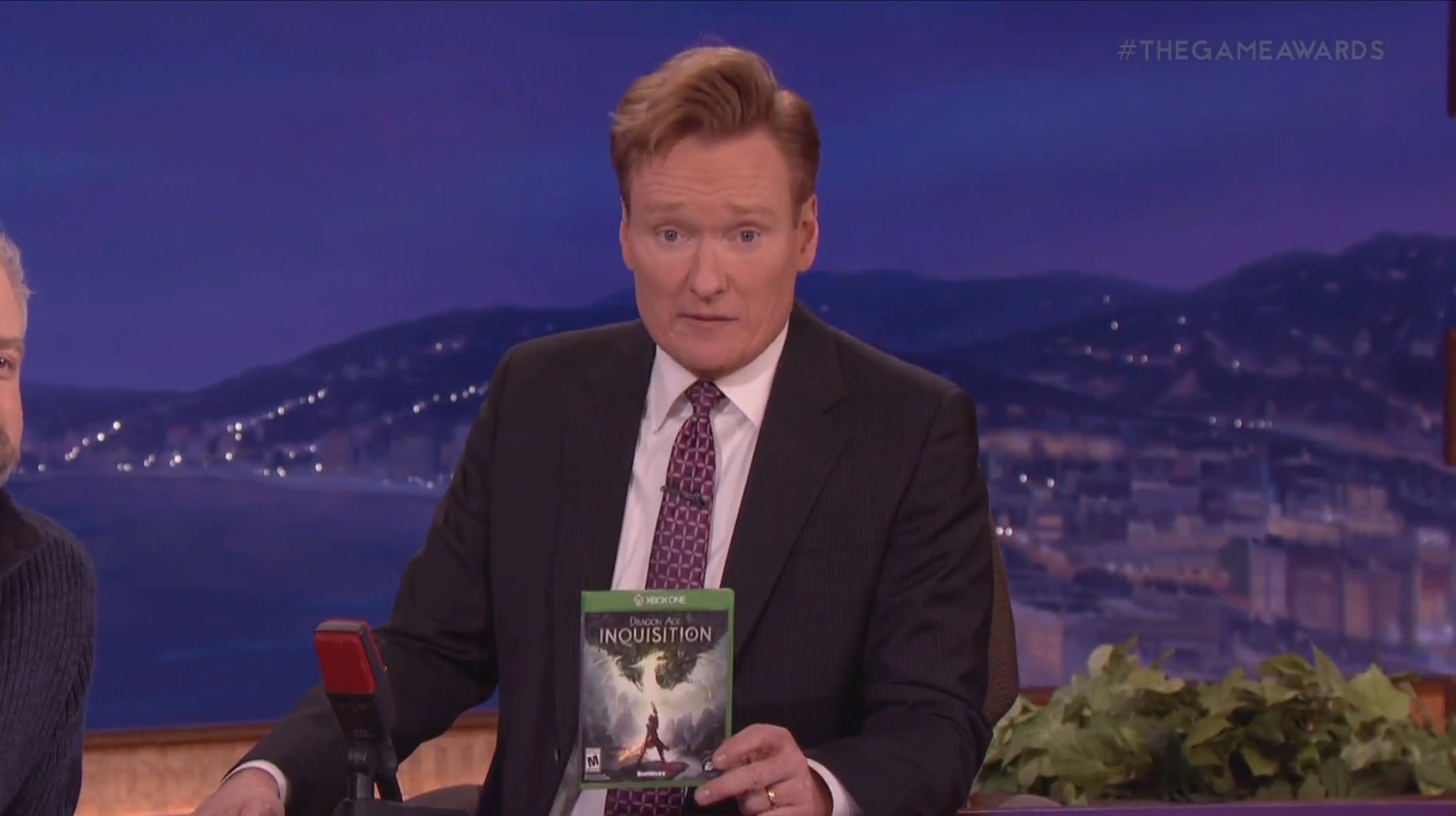 Adam Orth took the stage to show off his game, Adr1ft. We were able to play this game during E3 behind closed doors, and found it incredibly powerful. It was a bit hard to contextualize on paper, but the impact the game brings, especially with an Oculus Rift, is immense. Hopefully the trailer below can help people understand why this game caught our attention.

Some Hollywood celebrities sloppily gave out the award for best mobile/handheld game. It went to Hearthstone. Sadly, nobody from Activision/Blizzard was there to accept the award, except they actually were.

The camera panned to Fils-Aime and Keighley as the award for best fighting game was handed off. Then a member from Activision/Blizard was invited to the side stage, gave his thank yous, and went back to his seat. Keighley and Fils-Aime then continued their conversation. It was just oddly organized.

The award show wasn’t all triple-A blockbusters. Some love was given to indie developers as well. Facepunch Studios showed off its new game, Before.

After much off-stage shenanigans, we finally went back on stage for best sports/racing game. From Fifa 14 to Forza Horizon 2,  it was a highly contentious crowd. The award, however, went to Mario Kart 8. Fils-Aime accepted the award for the team in Tokyo.

An hour and 45 minutes in, the award show was only half way through. This was surprising considering how many off-stage awards were given. Granted, the Oscars are just as long.

Two major awards were also given. Far Cry 4 won best shooter while Valiant Hearts was given the award for best narrative.

Throughout the entire show, Keighley had been teasing two major premieres. One was by Nintendo and the other was by Hello Games. Nintendo would come at the end, but two hours into the show, it was time for No Man’s Sky to shine.

Any good award show has to recognize the past. For the Game Awards, the jury decided to recognize Ken and Roberta Williams, founders of Sierra Entertainment. Sierra was a game studio back in the ’80s that pioneered the adventure game genre. As the Williams gave their acceptance speech, they also announced that Activision would be publishing a new King’s Quest.

As the show was coming to an end, the award for best indie game went to Shovel Knight. Finally, after two hours and 45 minutes, we got to the game of the year. The short list included Bayonetta 2, Dark Souls 2, Hearthstone, and Shadow of Mordor. After much anticipation, Keighley gave the award to Dragon Age: Inquisition. It’s a game that well deserves the award, as our own Dennis Scimeca loved it.

But the show was not over yet. Fils-Aime took over and used the opportunity to show off the new Legend of Zelda. The camera panned to Miyamoto and game director Eiji Aonuma in a pre-recorded video.

The video showed off Link, looking into the horizon of a massive Hyrule.

Miyamoto also announced that Nintendo will release Star Fox before The Legend of Zelda later next year.

For many gamers, there was one big question: Would this be another rehash of the cringeworthy Spike Video Game Awards or something all its own?

The Spike VGAs were not the most popular amongst hardcore gamers. Although casual audiences didn’t mind the insanity and Mountain Dew advertisements, gamers found it insulting. Why should veteran game creators be awarded by women painted in silver? Why should winners onstage get teabagged by some guy dressed up as a soldier? Sure, it was a spectacle, but not one that many felt represented their hobbies and passions.

The Game Awards went out of its way to make it clear that Spike TV was not involved. At the bottom of its website, there was this disclaimer:

The Game Awards is not affiliated with or produced by Viacom Media Networks or Spike TV.

From the get-go, we knew that the Game Awards were not going to be the VGAs. The opening with Koji Kondo was beautiful. The monologues about the impact of games, although a bit self-serving, were much more welcomed than rehashed loser gamer jokes.

Even then, the three-hour show was oddly paced. Although Keighley did want to strike a balance between awards and premieres, it leaned more towards premieres.

That makes sense, however. The show wasn’t sponsored by Doritos or Mountain Dew; it was sponsored by video game publishers who wanted to show off games to thousands viewing on Twitch, YouTube, Steam, PS4, Xbox One, and even the Wii U. It only makes sense that the wares of large publishers were given more attention, even if that meant that the balance felt more like 60/40 than 50/50.

Could there be room for improvement? Sure, but as an award show, it wasn’t bad. Also, who else got super excited after watching that Legend of Zelda footage?

Screengrab via the Game Awards