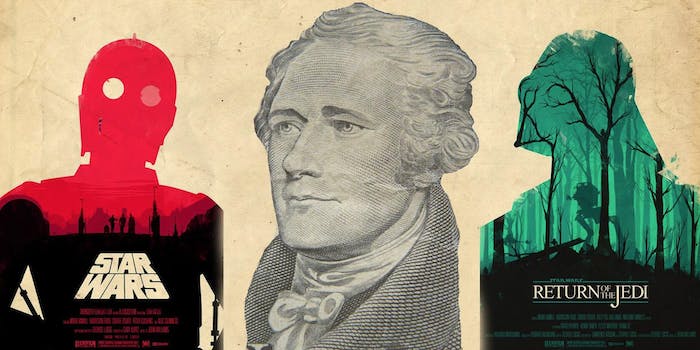 Members of both Hamilton and Star Wars fandoms spent this morning erupting over the news that composer Lin-Manuel Miranda had joined forces with J.J. Abrams to write cantina music for The Force Awakens.

Pairing Miranda, a MacArthur fellow and Pulitzer nominee, with an intergalactic space rebellion might not seem like a natural fit, but as the inevitable resulting hashtag #Force4Ham is currently proving, Star Wars and Hamilton, a hip-hop musical about the founding fathers, actually work perfectly together:

And when you think about it, it’s easy to see why. Both stories are narratives of plucky outsiders with hidden talents and lowly beginnings joining a haphazard, struggling group of rebels fighting for independence. Sure, one of these fights happened in America in 1776 and the other one happened a long time ago, in a galaxy far, far away—but beneath the surface, Star Wars and Hamilton are practically soulmates.

How does a ragtag volunteer army in need of a shower somehow defeat a global superpower? #Force4Ham pic.twitter.com/gZ3VP7fYYE

"Confession time? Here’s what I got. My fellow soldiers’ll tell you I’m a terrible shot." #Force4Ham pic.twitter.com/uWUYzjt45M

"Should we honor our treaty, King Louis’ head?”
“Uh… do whatever you want, I’m super dead.”#force4Ham pic.twitter.com/A58OFfNHEu

"Such a blunder sometimes it makes me wonder why I even bring the thunder" #force4ham pic.twitter.com/C60bNX7Ogp

Leia, I don't have a dollar to my name/ All I have’s my Wookiee and my top-notch plane #HamiltonStarWars #Force4Ham

I'm a trust fund baby, you can trust me. #Force4Ham pic.twitter.com/tF9PMlKkWV

So this is what it feels like to match wits with someone at your level. What the hell is the catch? #force4ham pic.twitter.com/R24uJU5JPy

And, of course, there are all the character parallels—and all the drama that goes with them:

There's a million things I haven't done, but just you wait. Just you wait. #Force4Ham pic.twitter.com/hskmpdGHa9

"You ever see somebody ruin their own life?" #force4ham pic.twitter.com/e8RgvgCw20

"The scholars say I got the same virtuosity & brains as my pops!" #Force4Ham pic.twitter.com/gW9IWp86BP

There are moments when the meme gets meta—and even better:

#LinManuelsStarWars #Force4Ham "I'm not throwing away my Han shot first."

"And when I meet Thomas Jefferson, I'mma compell him to include women in the sequel. Work!" #Force4Ham pic.twitter.com/Pk7TcOswsP

"And when I meet Thomas Jefferson, I'mma compell him to include women in the sequel. Work!" #Force4Ham pic.twitter.com/Pk7TcOswsP

But as brilliant as all this is, #Force4Ham is even better when it goes in the other direction:

Though the “X4Ham” meme might be new to Star Wars fans, the Hamilton fandom has made a habit of applying Hamilton lyrics to the rest of the world since last month’s popular trend #ParksandHam, quickly followed by #Cap4Ham, because why not pair Hamilton with the Avengers?

But #Force4Ham is already bigger than either of them—proving just how much energy there is in each fandom at what might be their peak moments. After all:

"Look around, look around, at how lucky we are to be alive right now!" #Force4Ham pic.twitter.com/MYGfGymiTl