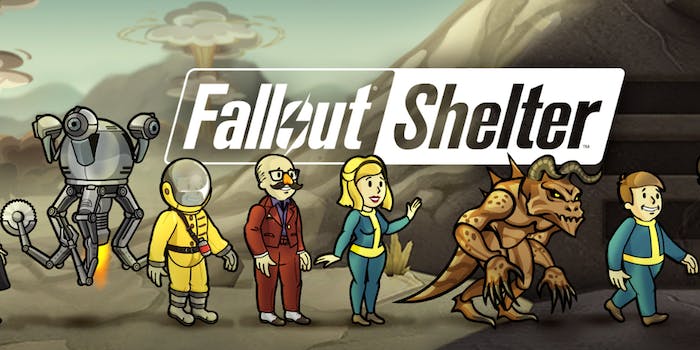 The new content added to the Android version is also now available on iOS.

Fans on Android devices who’ve been dying to experience the mobile version of the post-apocalyptic Fallout universe should get their radiation suits ready.

Fallout Shelter, the free-to-play mobile game first announced and released at Bethesda’s E3 2015 press conference took a few months to make it to Android. Now Android users are getting an updated version of Fallout Shelter with new content that adds more iconic characters and enemies from the Fallout universe. iOS users also have access to this new content, some of which addresses one of the issues we noted with Fallout Shelter in our review.

The demonic-looking Deathclaws are some of if not the most dangerous enemies in Fallout. In Fallout: New Vegas specifically, one was well-advised to run away at the first sight of a Deathclaw on the horizon. Deathclaws are now part of Fallout Shelter, and running away is not an option when you’re locked inside a Vault.

Mole rats, another mutant enemy from Fallout, are a piece of cake to handle in Fallout 3 and Fallout: New Vegas. We’ve already discovered for ourselves in the updated iOS version of Fallout Shelter that random Mole rat infestations can kill a whole lot of your Vault Dwellers if you allow the infestation to spread.

The updated version of Fallout Shelter also includes the three-armed hovering Mr. Handy robots that featured heavily in the first gameplay footage of Fallout 4 revealed at E3. The Mr. Handy floating butlers complete with British accents are such an iconic symbol of the Fallout universe that Bethesda had a life-sized Mr. Handy at its E3 booth this year.

In Fallout Shelter, Mr. Handy will not only help collect resources automatically, thus sparing you from some of the endless tapping on the screen (the aforementioned issue we had with the game on iOS), Mr. Handy may also be sent into the Wasteland to scavenge for armor and weapons for your Vault Dwellers.

You can find Fallout Shelter for Android on Google Play, and can visit the game’s website if you want to learn more about what you’ll be stepping into when you take over a Vault as its Overseer. (As of this morning, users also discovered a way to hack the game for Windows 10.) Fallout Shelter is definitely addictive to Fallout fans for it authenticity, and the new content just makes the game even more authentic.