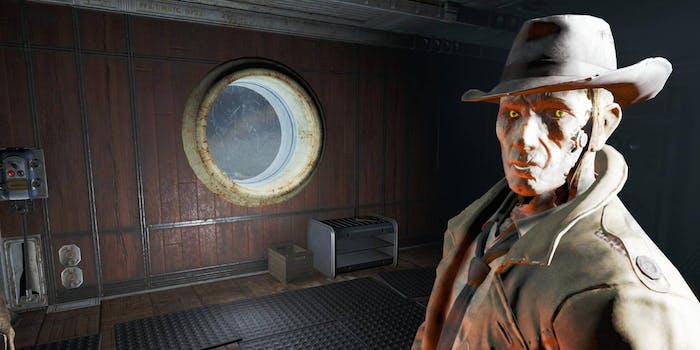 This man just amazingly beat Fallout 4 without killing anyone

Gamers have always had a fascination with beating games while being marred with tough, self-imposed restrictions. We’ve seen them beat The Legend of Zelda: Ocarina of Time blindfolded, seen Resident Evil 4 conquered by a puny handgun.

Pacifist runs have also been around for a while. That is, to beat the game without actually killing anyone.

The latest pacifist run comes from Kyle Hinckley, a YouTuber who runs a channel called The Weirdest. He has done something absolutely insane: beat the recently released Fallout 4 without killing anyone, on the hardest difficulty.

It took a lot of time, a bit of ingenuity, and a ton of saves, but he was able to pull it off.

Just because Hinckley is doing a pacifist run, it does not mean he goes without killing. He personally doesn’t kill enemies, but if he happens to close a door on a giant cockroach, it’s just happenstance.

Hinckley explains that, in his opinion, achieving a pacifist playthrough means not having any kills on your record. The game registers kills based on if a weapon you were holding led to the death of another. If another object happens to kill an enemy, the game won’t register it as a kill you made.

If you’ve played through Fallout 4, you would know that there’s a point in the game that requires you killing six people to progress. Luckily Hinckley found that joining with a certain faction would bypass the need for those six to die.

As Hinckley was playing through his pacifist run, it started to really mess with the game. Glitches started popping up where enemies would appear out of nowhere. Beating your arch nemesis, Kellogg, was an ordeal as well that took five hours of game manipulation.

Hickley admitted that he was saddened by how much emphasis Fallout 4 puts on combat when compared to previous games in the series. Past Fallout games always allowed for a solution that avoided combat. In a sense, Hinckley didn’t beat the game on a pacifist run, but rather exploited the game to achieve what he considers a pacifist run.

Either way, kudos for Hinckley for having the patience and wherewithal to take on this monumental, non-violent challenge.