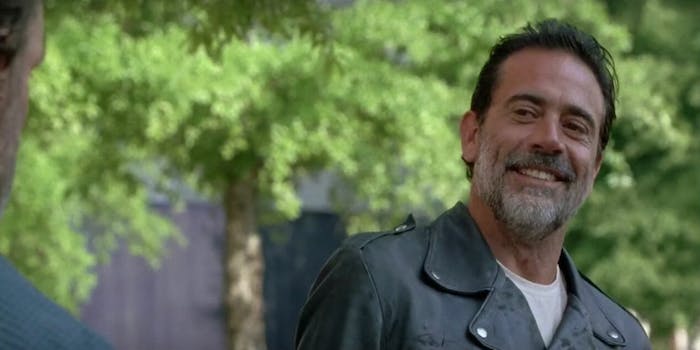 Does Negan die in ‘The Walking Dead’ comics?

Will 'The Walking Dead' kill Negan, its most hated character? Here's what goes down in the comics.

Negan, The Walking Dead’s most fearsome antagonist, has been incredibly effective at wreaking havoc for the show’s characters since his first appearance at the end of season 6. So much so, that viewership has taken a hit in part because he’s just so good at making us hate him.

He’s responsible for dozens of deaths, including some major characters, and managed to torment Rick to the point of a mental breakdown. With the second half of The Walking Dead’s season 8 underway, many fans wonder when Negan will finally get his just deserts and die already. They’re even peeking ahead at The Walking Dead comics, which, despite significant departures from the show, could still drop hints about Negan’s fate.

Does Negan die in The Walking Dead?

Well, let’s get this out of the way: Negan is still alive, both on screen and in the comics.

This may be a complete shocker for some. In case you’re wondering how the hell Rick could let this happen, let’s break it down for you.

If the show is loyal to Robert Kirkman’s The Walking Dead comics, there’s a good chance that Negan will actually live to not only see the end of the war but what comes years after it.

The entire conflict between the Saviors and the colony is due to Negan’s belief that he’s needed to bring strength out of people by instilling fear and maintaining a strict, imbalanced system of power where he’s at the top. Eventually, those same followers have had enough, and Dwight helps Rick gain the upper hand by faking his death.

When Negan and the Saviors arrive seeking to muscle in on Rick’s replacement, Rick appears and points out exactly how Negan’s outlook on life is flawed and that there’s no reason all of their people can’t coexist in peace. Feeling betrayed and out of options, Negan attacks Rick. After the scuffle, Rick has a broken leg and Negan ends up with a slit throat, making it appear that Negan as finally met his demise. But wait! Rick orders the town’s doctors to mend Negan’s wound, and he survives.

So why does he survive?

Despite all of the chaos and tragedy Negan caused, Rick felt it necessary for Negan to be alive to witness the world move on, peacefully, without him. As the story continues, Dwight becomes the leader of the Saviors, who join the colony with groups from Alexandria, the Hilltop, and the Kingdom.

After spending two years locked away in a cell, Negan starts to build a relationship with the people who visit him, especially Rick and Carl. Although his time as a leader was dark, he has experience reining people in during tough times and is often a voice of guidance for Rick, even though Rick doesn’t always want to hear it.

There are some powerful moments with Negan, including one when his cell is left unlocked and he chooses to stay inside to win Rick’s trust. Despite this, he’s inevitably freed because an Alexandrian feels Negan is a better choice than Rick to lead them through a conflict with a group of survivors named the Whisperers. (Negan getting out was only a matter of time anyway; you can’t keep a character that compelling locked away too long.)

At this point, Negan’s character starts to take a major turn. He joins the Whisperers in what’s clearly an attempt to win them over to fight Rick again. But it’s soon revealed that he’s not there to betray the colony, but to work as a spy. He kills Alpha, once again trying to prove his loyalty to Rick and his cause.

He soon returns to the colony, starts to gain Rick’s trust, and begins a redemption arc for the ages. It includes a brief tryst with “Lucille 2,” an emotional confrontation with Maggie, and Negan and Rick saving each other’s lives.

What happens to Negan on screen?

Does this comics plot mean show fans won’t get to watch Negan die? Not necessarily. Showrunner Scott Gimple told Entertainment Weekly that some changes to the story were inevitable based on previous deviations, and “[i]t plays out very differently.” Actor Jeffrey Dean Morgan, who won a Critics Choice Award for his portrayal of Negan, has plenty of options for other work, so it wouldn’t be surprising if the show’s executives just wrap the storyline and moved on to the next.

But if the show is going to continue following the path laid by the comics, especially now that Carl’s last wishes are for his dad to find a way to make peace with his enemies, don’t be surprised if Negan ends up locked away in someone’s basement for a while before going on a hall-of-fame-level apology tour.