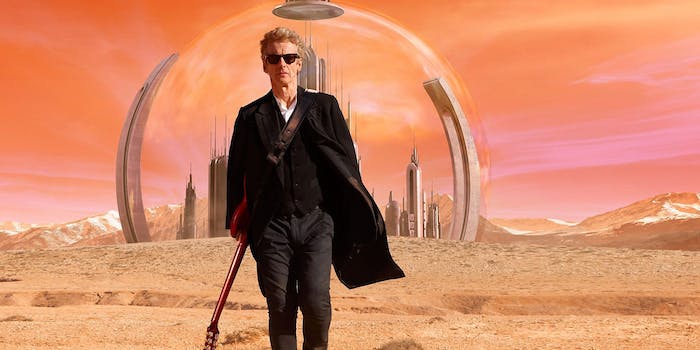 In Clara Oswald's last episode of 'Doctor Who,' the Doctor must finally learn to let go.

This review contains spoilers for season 9 of Doctor Who.

Done right, Doctor Who should see the Doctor triumph while revealing his own fallibility. Either that, or the tragedy of his failure must be sincere. It’s a difficult balance to achieve, because the Doctor is one of the biggest Mary Sues on television: a charming, troubled genius whose heroism is so awe-inspiring it causes armies to lay down their weapons at his feet.

For much of “Hell Bent,” the ninth season finale, it felt like we were edging dangerously close to self-indulgent territory. Clara Oswald died two episodes ago, and since then the Doctor has been working his way through the stages of grief. Last week was anger, as he spent billions of years punching his way through a diamond wall, and for the finale he moved on to bargaining. In classic Doctor Who style, he was willing to go to the end of the universe to bring her back—even if he had to wipe her memory to do it.

Many fans will have watched this storyline unfold with apprehension, which is why the payoff worked so well. By flipping the roles so the Doctor lost his memories instead, Steven Moffat went against expectations. This is, after all, the writer who had the Doctor store his wife’s soul in a database for eternity instead of letting her rest in peace.

In many ways, this season has refuted earlier criticisms against Moffat’s time as showrunner. While some of the ongoing problems remain—the frequently incoherent plots; the focus on style and bombast over authentic humanity—there was a clear effort to counteract the ongoing accusations of sexism.

Behind the camera, the show hired its first women writers since 2008 (Catherine Tregenna and Sarah Dollard, who wrote Clara’s death), and brought back Rachel Talalay to direct the two-part finale, which included one of the most experimental episodes Doctor Who has seen in years.

Meanwhile, Moffat introduced Game of Thrones star Maisie Williams as Ashildr/Me, an intriguing new antagonist with an instrumental role in Clara’s death and resurrection. The Doctor’s weird jibes about Clara’s appearance were gone, replaced by a deeper and more mature kind of friendship, with a conscious effort to highlight the danger of a partnership between two such reckless adventurers.

Fans will doubtless be debating Clara’s death until the cows come home. On the one hand, it’s exciting to see her and Ashildr fly off into the intergalactic sunset with their own TARDIS. But by wiping the Doctor’s memory and bringing Clara back from the dead, this epilogue negates the impact of a permanent character death.

After two episodes of wallowing torment, the Doctor’s grief was cleanly excised to make way for the Christmas special—and his next companion, whoever they may be. As for Clara, she spent most of her last episode supporting someone who was mourning her death. With a lesser cast than Capaldi and Coleman, this final act undoubtedly would not have worked. Clara had to look at at the Doctor’s four billion years of self-flagellation, and with sensitivity and sincerity, say no.

As well as being Clara’s final send-off, “Hell Bent” was a satisfying melding of old and new Who. Gallifrey is back, and special effects have finally progressed enough to do justice to its domed cities and opulent costumes. We also got a fun cameo from a vintage TARDIS, balancing out this season’s most embarrassing innovation: the Doctor’s sonic sunglasses. (Thankfully they’ve now been replaced by another screwdriver, although the Doctor’s electric guitar solos—an often jarring midlife crisis detail—were still out in full force.)

One of the most moving callbacks was hidden in Murray Gold’s soundtrack, rounding out one of his strongest years so far. As the Doctor landed on Gallifrey, you could hear the strains of “Bad Wolf” from the first and second seasons. A reminder that Capaldi’s curmudgeonly, often fearsome Doctor is still the same man we’ve known all along.