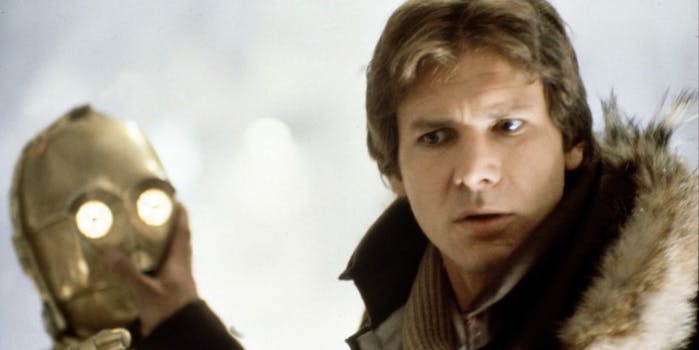 Yes, there's going to be even more 'Star Wars.'

Back in 2013, Entertainment Weekly revealed that a young Han Solo series and a Boba Fett series were being developed as potential Star Wars spinoffs, taking place between the two existing movie trilogies. Lawrence Kasdan (Star Wars and Indiana Jones) and Simon Kinberg (X-Men: First Class) were said to be writing these spinoffs in 2012, but a lot could have changed since then. Disney has yet to confirm whether these movies are still in production, or if they’ve been scrapped to make way for different spinoff ideas.

Disney chief financial officer Jay Rasulo specified that this type of origin story spinoff would be more adult than the original trilogy, saying, “This is not a new franchise for kids.” This makes Yoda seem a little less plausible as the third rumored spinoff character. A 900-year-old animatronic/CGI mentor figure doesn’t feel like a great fit for an adult-friendly adventure movie.

Whatever they turn out to be, these upcoming spinoffs make sense in the context of Disney’s plans for a brand new expanded universe. They are likely to be released around 2016-2018, alongside the sequel trilogy.

So, this is all good news for Star Wars fans in general, but if the lineup really is Han Solo, Boba Fett, and Yoda, it’s perhaps not the best message to send the many fans who were disappointed by the lack of female characters in Episode VII.