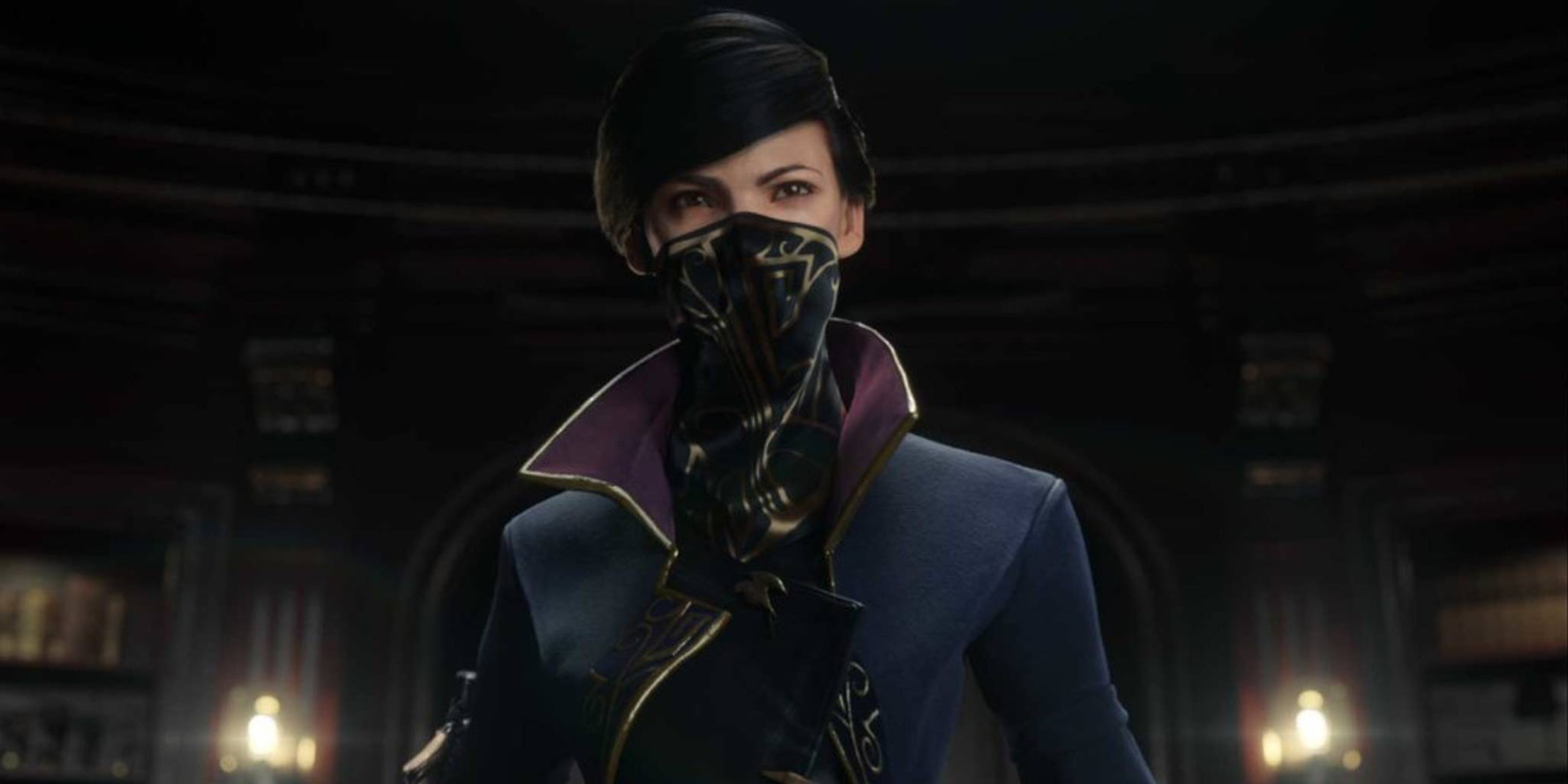 Review: Dishonored 2 is a rare game you can enjoy replay after replay

The beauty of Dishonored 2—much like its predecessor—lies in the wealth of options it offers to the player.

The game’s first decision point happens right from the beginning cutscene, having players choose whether to slide back into the shoes of the first game’s protagonist, Corvo Attano, or his apprentice-slash-daughter-slash-empress Emily Kaldwin, now a playable character. Then, like a fast-growing plant, the choices branch organically, practically at every step. It’s no surprise that the weight and significance of these choices vary greatly through a single playthrough. Whether you address an optional objective or spare a homicidal adversary, it is these decisions that determine your fate when the credits roll. It’s a sequel that affirms Dishonored as a rare breed: a story-driven, single-player experience with immense replay value. 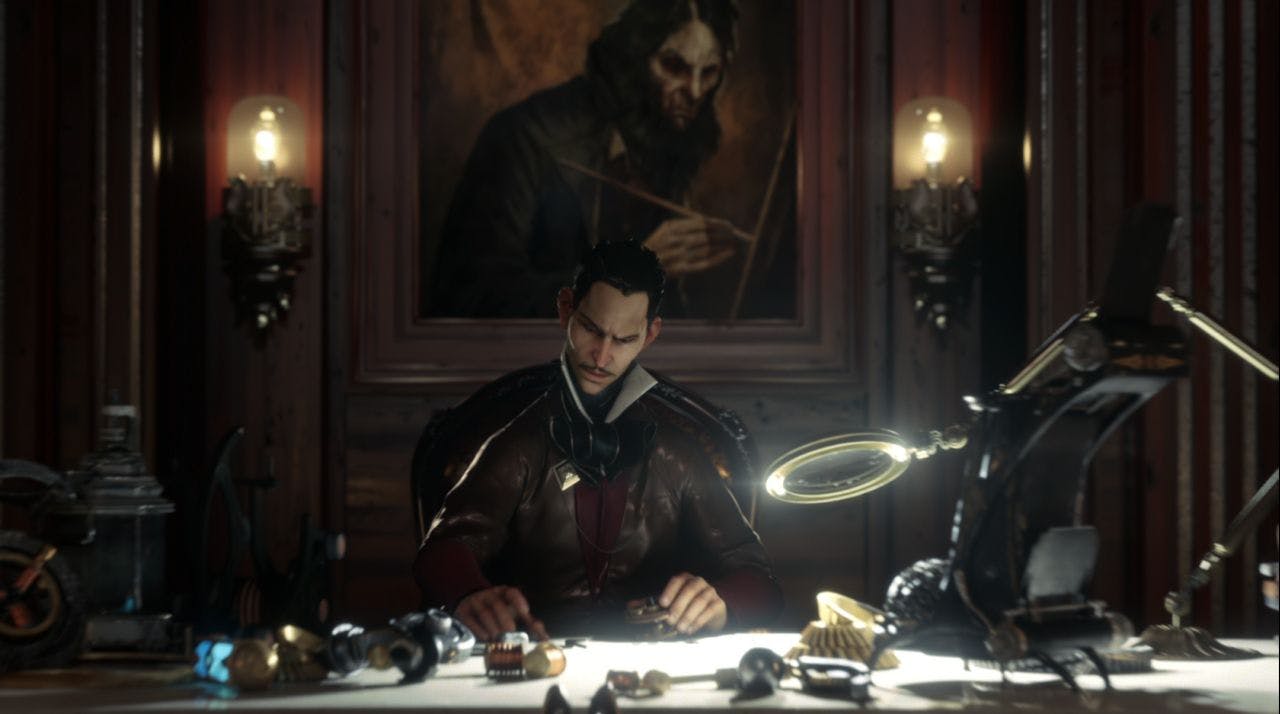 Dishonored 2 kicks off its tale with an almost rushed swiftness, as if developer Arkane Studios knew its fans would want to start playing as soon as possible. It’s a story already dense in exposition, so the absence of a prolonged prologue was a smart decision by the studio. 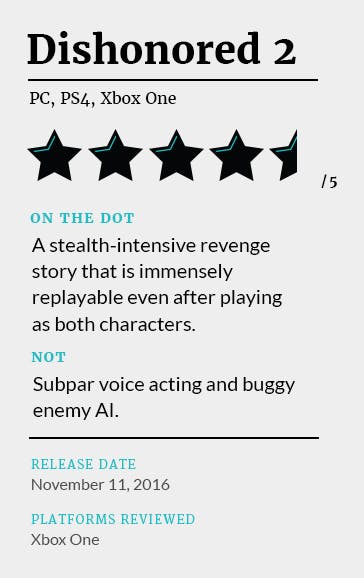 The game’s opening finds Corvo and Emily hosting a rather morbid commemoration of Emily’s mother’s assassination, an event that incidentally was the starting point of the previous Dishonored. The memorial comes to a halt with a violent attack by Delilah Copperspoon, an antagonist from the Dishonored DLC missions, who now claims to be the half-sister of Emily’s mother, and thus the rightful ruler of Emily’s land of Dunwall. This results in the exile of Corvo or Emily, depending on who you choose to play (the other character becomes encased in stone). The bulk of Dishonored 2 chronicles the journey to reclaim the throne and defeat Delilah and her allies.

Rather than giving an expanded ability set to a single protagonist like Corvo, Arkane made considerable efforts justify its dual protagonist feature without making it a forced gimmick. While lesser NPC conversations essentially cover the same material when using either protagonist, the interactions with the key figures and Dishonored 2’s narrative conclusion provide enough justification to play at least twice.

It’s a sequel that affirms Dishonored as a rare breed: a story-driven, single-player experience with immense replay value.

Adding immense value to each playthrough are the characters’ unique skill sets. In the previous game, Corvo’s magical talents weren’t overt reflections of his personality; the ability to possess other humans or slow down time were simply mesmerizing tricks that have produced countless highlight videos since the original Dishonored came out. Emily possesses more diversionary powers like creating a doppelgänger to function as a decoy. There is some overlap between a couple abilities; both father and daughter can warp unseen over short distances, for instance. A player who mastered Corvo’s tricks in the last outing will feel right at home, while Emily provides a fresh playthrough experience. 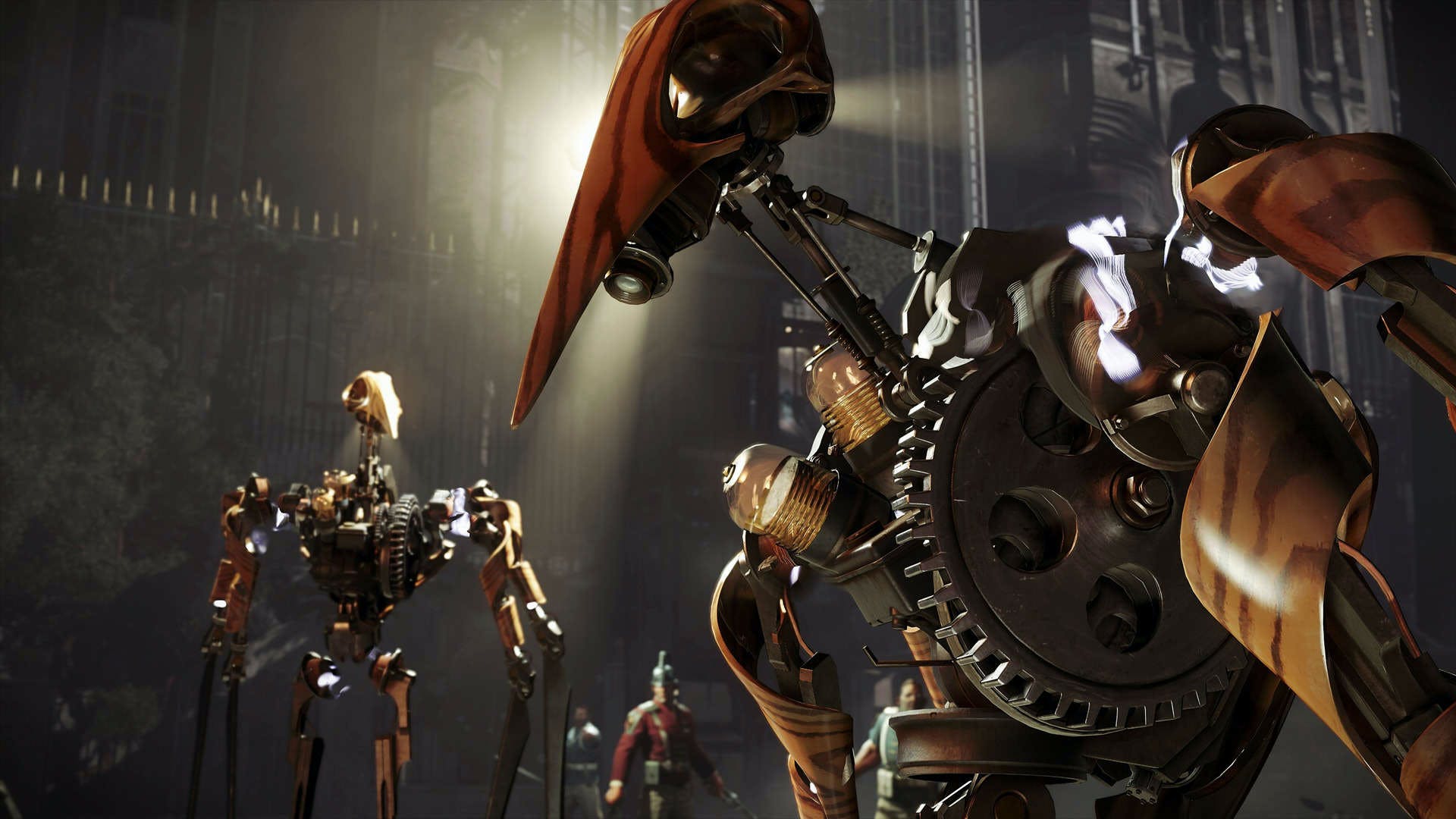 The fact that you can attempt a no-powers playthrough speaks to the versatility of Dishonored 2. This doesn’t in any way diminish the allure of a fully supernatural session and the potential of using every available power at least once per chapter. The game invites you to limit yourself as much as it welcomes you to use every possible tool you come across. This includes taking hours worth of detours to pick up optional gear for further enhancements.

One such worthwhile upgrade opportunity involves craftable Bonecharms—trinkets that augment your protagonists’ stats or abilities. Exacting retribution on Delilah is worth the time investment, which is why there’s greater gratification in operating like a patient ghost rather than completing a chapter in record time. Of course, you have every chance to lethally power your way to each objective waypoint, though a high kill count will lead to a “bad” ending. It’s a game rich in choices but it’s not without its consequences. It’s the studio implying, “Yes, you can play however you’d like, but we prefer you try to be as stealthy as possible.”

While your main mission orders are clear at the start of each chapter, every locale has a wealth of diversions, even side goals that don’t make themselves known until you complete them. For the completionist who wants to find every lore document and consumable item, a typical chapter can last 90 minutes, 120 minutes if you want to remain undetected and not kill anyone. These very same missions can take less than 5 minutes to clear if you’re going for a speed run, an accomplishment that, of course, requires you to know the lay of the land. 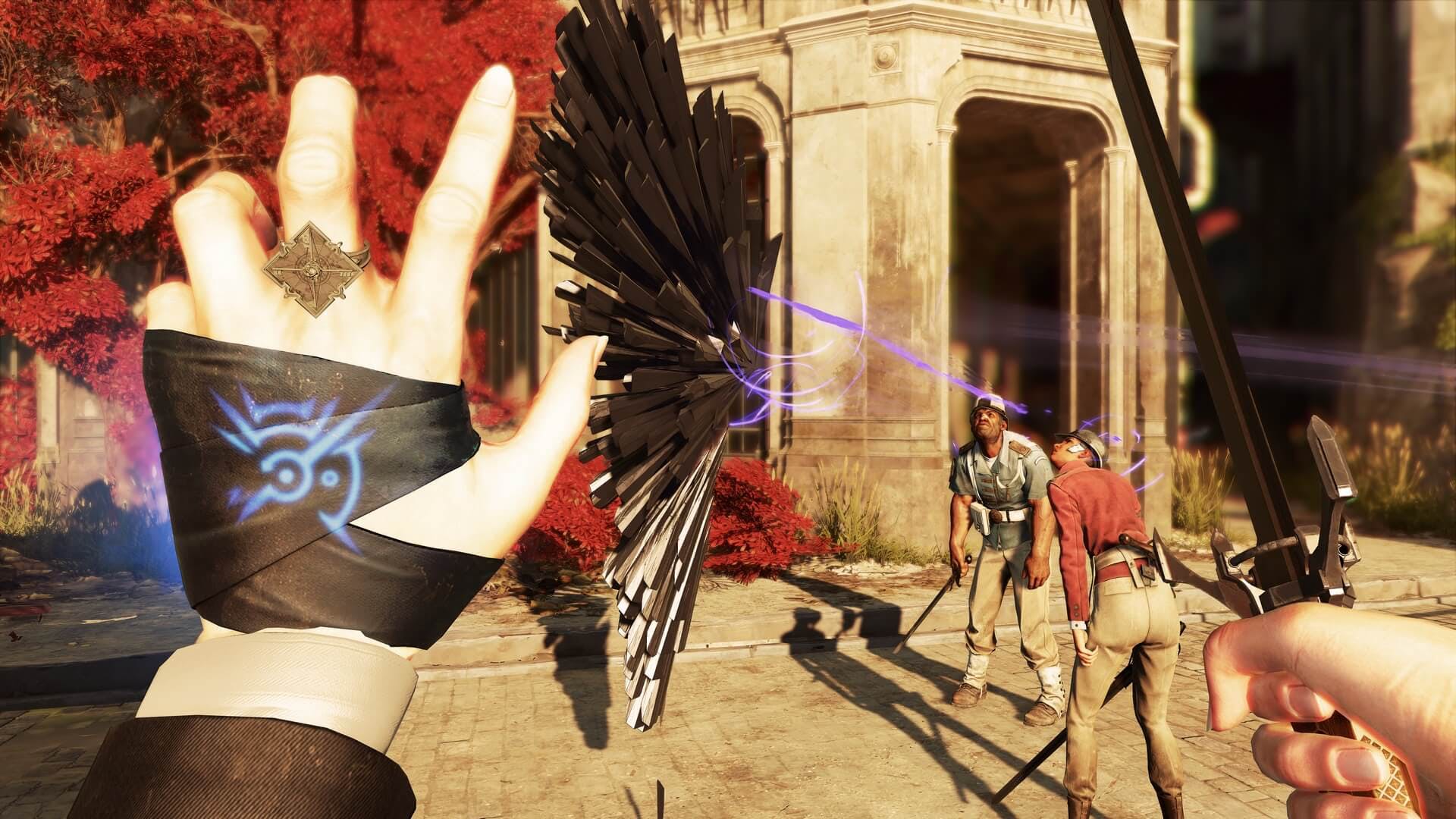 Rather than offer new areas within Dunwall (the setting of the first Dishonored), Arkane set the majority of Dishonored 2 in Karnaca, Corvo’s home region. Karnaca is a territory every bit as engrossing as Dunwall. Its sun-drenched beige skyline echoes a mixture of Mediterranean cityscapes, which contrasts with Dunwall’s London-inspired gray aesthetics in the daytime while being equally as haunting at night. Its imaginative art direction is greatly enhanced by its often exaggerated character designs, giving Dishonored 2 the vibe of a graphic novel come to life. Nestled in and around Karnaca’s streets and mansions are numerous narrow multi-storey dwellings worth exploring. Aside from the myriad consumables and gear you’re guaranteed to come across, these optional routes often beget more unbeaten paths, whether it’s a guarded rooftop littered with valuable upgrade items or a balcony across a road leading to yet another unexplored building.

As with every quality adventure game worthy of replay, playing Dishonored 2 with fresh eyes is a wholly different experience than playing it when you’re familiar with its maps and enemies placements. To that effect, it’s mildly unfortunate that some newcomers to the series won’t have the best “fresh eyes” experience when they try to progress and understand how Dishonored‘s universe operates. Even at its Normal difficulty setting, Dishonored 2 often feels like both a reward and a challenge to fans who embraced the original games four years ago.

It makes sense that this sequel has an overall feeling of heightened stakes, though it comes at the expense of first-time players devoting time and patience to overcome its learning curve, particularly in navigating through its vertically intensive areas. Platforming in the first person can be challenging when you’re traversing large gaps during a daring escape. The good news is that—like the first Dishonored—it doesn’t take an entire playthrough for the game to “click” for newcomers. By the time you’ve cleared the beautifully complex Clockwork Mansion in the fourth chapter, you will have earned your share of powers, understood how the patrols behave, and learned its distinct melee combat. 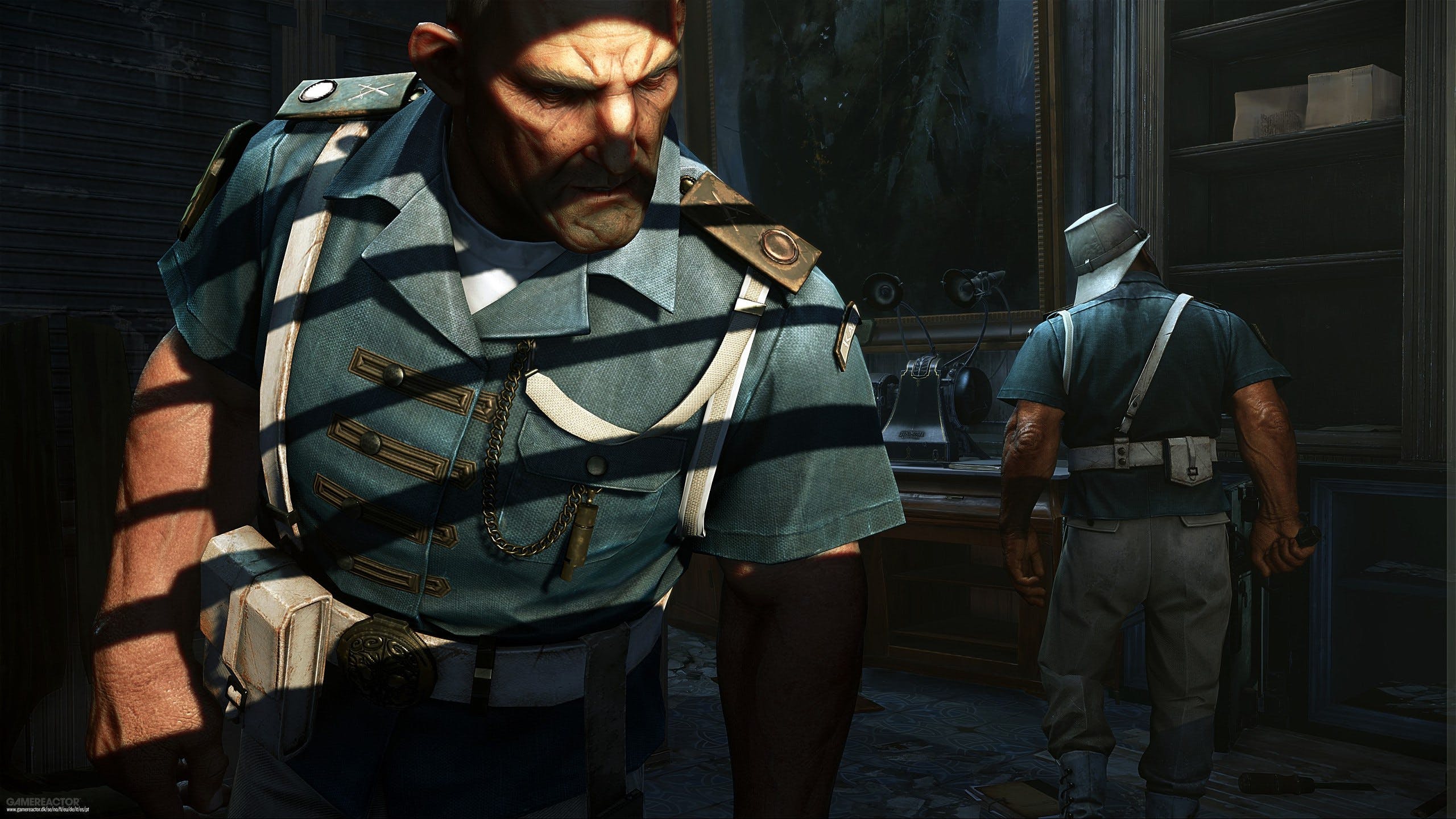 Beyond getting used to Dishonored 2’s platforming and close-quarters combat, the game’s more substantial shortcomings are limited to tolerable issues involving the AI and the production values. It’s not unusual to find an enemy guard moving erratically once a chapter, and they can occasionally behave nonsensically when trying to deduce your location while you escape. The other matter involves the voice acting, which just like the first Dishonored wastes its celebrity talent (Vincent D’Onofrio and Rosario Dawson) with passable performances. Again, these are minor points that, while noticeable, do not significantly impair the overall playthrough.

Dishonored 2 is just the latest example in a long line of games that continue to illustrate the close relationship between quality stealth games and emergent gameplay. Any given playthrough will present you with myriad chances to both create and react to opportunities, many of which appear with little to no warning. It’s in surviving these situations (preferably undetected) where Dishonored 2 delivers its most tangible rushes and most profound sense of gratification. It’s a tale of vengeance that’s presented in an imaginatively conceived world, one that is as threatening as it is inviting.

Disclosure: An Xbox One copy of Dishonored 2 was provided by Bethesda for review purposes.