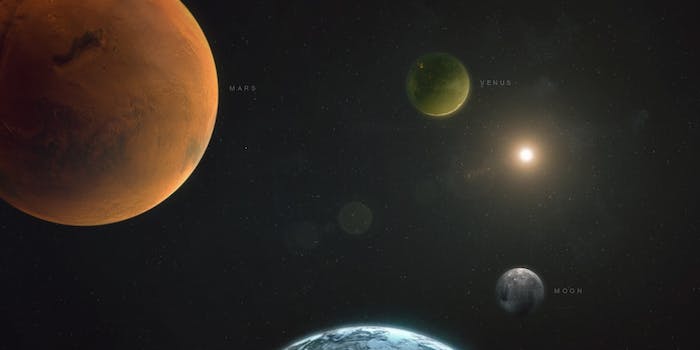 If you don’t know the whole backstory behind Bungie’s Destiny, or if you do and want to unlock some unique game content, take a tour of Venus, Mercury, and the Moon.

Planet View is an introduction to the Destiny universe, where humanity has been pushed off its colonies across the solar system, and huddles within a single city on Earth. Planet View is built with Google technologies, and this trailer makes it pretty clear that we’re talking about Street View.

Through exploring the links across all the different planets, you will eventually view what seems like all the promotional video released for the game at this point. Not all the Planet View content is in place yet, however. Plenty of the exploration links are marked “Coming soon” and are missing video.

There are some cool payoffs in Planet View, like seeing the wreckage of the International Space Station in orbit over the moon.

The biggest payoff might be a code for Destiny content, however. Thorough exploration of all the Planet View content unlocks a code, which then unlocks a special emblem when the code is redeemed on the Bungie website.

Emblems in Destiny are similar to nameplates in Halo, icons that are placed next to a player’s name, which other players can see in multiplayer lobbies, for example. If Destiny players are anything like their Halo brethren, they’re going to be asking each other “Where did you get that?”when they see emblems they don’t have, and will rush over to Planet View to earn the code.

Make sure you pay attention to the minimap, and not just the obviously marked links at each location, if you want to view all the Planet View content and earn the code. Or you could just go to this Reddit thread, which posts all the codes released so far, some of which were distributed at conventions and events.

We don’t know yet what all the codes unlock, but we tested them, and they were all accepted on Bungie.net.

Destiny will be released for the PlayStation 3, PlayStation 4, Xbox 360, and Xbox One on Tuesday, Sept. 9.