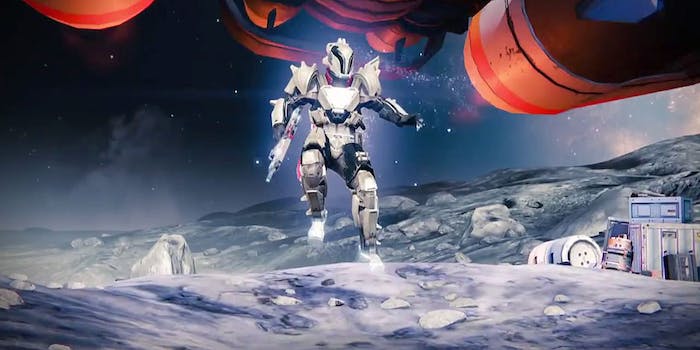 ‘Destiny’ beta is live for Xbox a day early

You could be playing this hotly-anticipated follow up to Halo right now.

Destiny, the hotly-anticipated massively multiplayer online shooter from the creators of Halo, opened its Xbox platform beta testing last night, a day earlier than had previously been announced.

The plan had been for Bungie, the game developer, to distribute three beta invites on July 23 for each player who registered their Destiny beta code on Bungie’s website. Those beta invites were released yesterday, however, which meant Xbox 360 and Xbox One players were free to begin downloading and installing the beta test hardware.

Depending on your download speeds, that means you could have been playing the Destiny beta on your Xbox last night. For anyone else who ran their downloads overnight, that probably means they’re ready to jump into Destiny as of this morning.

Bungie has big shoes to fill with the release of Destiny. Their shoes, actually. Bungie’s previous franchise, Halo, has become synonymous with the Xbox line of game consoles, and remains one of Microsoft’s biggest gaming IPs. Bungie pioneered online multiplayer gaming, previously the near exclusive province of PC gamers, with Halo 2 in 2004. Microsoft’s entire Xbox Live online network owes its success in large part to the explosive popularity of Halo 2.

Now, with Destiny, Bungie is trying once again to create a defining experience for video game consoles. The story is an epic, science-fiction adventure where humanity is attempting to reclaim its lost colonies throughout the solar system from various alien races that wish to destroy mankind. Online, cooperative multiplayer is at the heart of Destiny’s design and appeal to players.