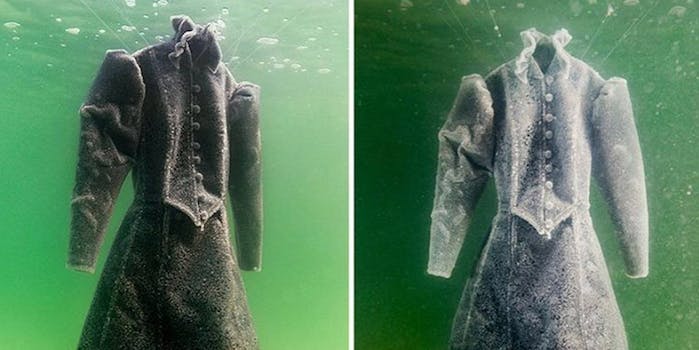 How the Dead Sea dress changed colors and captivated the world

The science behind the art sensation created and photographed by Sigalit Landau.

The world is abuzz with news of this dress, lifted from the Dead Sea and encrusted with white crystals of salt.

As part of a series on salt, Israeli artist Sigalit Landau submerged the dress into the super-salty Dead Sea. The dress was originally black—a replica of the dress worn by an actress playing a haunted woman in a Hasidic Jewish ghost story. In the story, the woman is possessed after her husband-to-be dies before they can wed, according to Live Science.

Now, photos of the Small Salt Bride dress are on display at the Marlborough Contemporary museum in London, England. You can get a glimpse of the eight shots taken underwater up close and personal from now until Sept. 3.