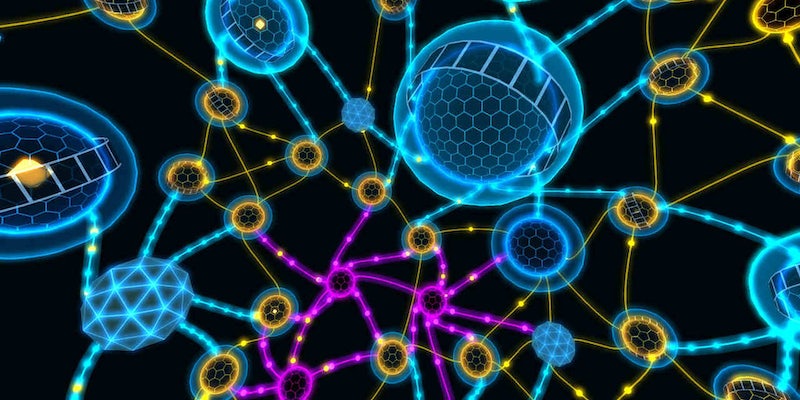 Darknet just might sell you on virtual reality gaming

We took a dive into cyberspace at PAX Prime.

When I dove into the cyberspace simulation, I lost myself in the illusion. My relationship to meat space was momentarily forgotten. And that’s precisely what a virtual reality game ought to do for the player.

Darknet was tucked away in the corner last weekend at the Indie Megabooth, the contiguous floor space shared by a gaggle of indie developers at PAX Prime. The VR cyberhacking game is the creation of E McNeill. It is the best Oculus Rift game I’ve ever played, and it almost sold me on the future of VR gaming.

The best games for Oculus Rift are built from the ground up, specifically to work with the virtual reality hardware. And that’s what Darknet is. It is based on Ciess, a game McNeill developed for the VR Jam, a contest for virtual reality games held between Aug. 2 and Aug. 25. McNeill developed the game in three weeks, and Ciess won the Grand Prize.

“That gave me the validation and motivation I needed to turn it into a full game. I changed the name to Darknet, got a whole new art style, and started building out a much more expanded and ambitious game,” McNeill told me after my demo.

In Darknet, players float in cyberspace, surrounded by data nodes. By turning their heads, players target different nodes to inject viruses into or to dive into and try to hack.

And when I say “dive,” I literally mean dive, as in experiencing the sensation of plunging or falling into the data node. Once inside the node, a hacking minigame challenges players to seize a field of data points around the core of the node, in the middle of the screen, in order to take the node over.

The Xbox 360 control pad in my hands enabled simple actions like selecting a target data point, or injecting a virus into the larger network of data nodes. I got used to flicking my head in the direction of the object I wanted to manipulate, staccato movements that allowed me to quickly surf the net as I tried to crack it.

It took me about an hour to realize that I had somewhere else to be, and had no idea how much time had passed since I’d strapped the Oculus goggles over my head. My sitting position had shifted 90 degrees in the chair, and I also had no clue that I’d moved. There was a moment of unsettling disorientation as I took off the headphones and was hit by the noise of the crowd all around me.

“Immersion is the buzzword of the day, and I think a big part of that, that people don’t focus on enough, is the simple fact that you are blocked out from the rest of the world,” McNeill said.

“Whenever I put on the Rift I felt like a hacker, no matter what I was playing, so I wanted to capitalize on public imagination of what VR meant. The feeling of being surrounded, or the Minority Report-style [user interfaces] where everything is bubbling around you and you’re picking out from an abundance of information,” McNeill said.

McNeill designed Darknet to be gentle on peoples’ stomachs, as motion sickness is a common problem reported by Oculus Rift users. Movement is limited to forward and backward, and usually the player is stationary. McNeill is still trying to find the perfect size for the text displayed in the game. I had little problem with reading the game menus, though I wished they required less head movement and presented themselves in a narrower range of vision.

I asked McNeill if he was a William Gibson fan. In his defining book, Neuromancer, Gibson established the concept of surfing cyberspace to access data as it’s most commonly envisioned today. Darknet is sure to summon memories of Neuromancer from anyone who’s read the book.

“It’s complicated. I’m a huge fan of William Gibson in theory. I read Neuromancer a while ago, and it stuck in my head enough that I’m making a game that was primarily inspired by Neuromancer. That said, I didn’t really enjoy the book,” McNeill said. “I just love the ideas [in] it. I came out of it thinking ‘Damn, I want to do more in cyberspace,’ and so that’s what I did with this game.”

Darknet will be a launch title for Gear VR, the new virtual reality headset announced by Samsung that will be released this fall. The Oculus Rift is currently only shipping as a development kit, and not a commercially-available product, so there’s no release yet for Darknet on the Rift.