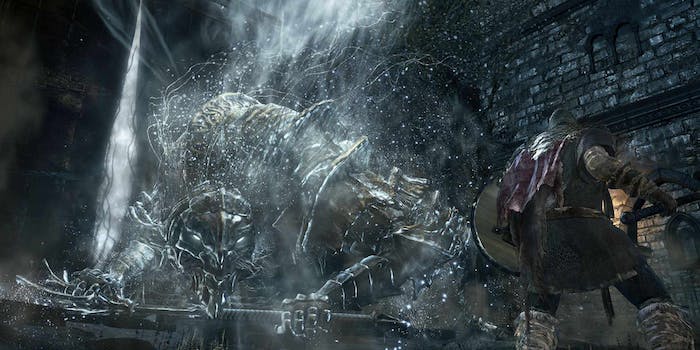 Life beyond my countless deaths in Dark Souls III.

Whether it’s a trade show demo or the final build, the early moments of any Dark Souls installment are always marked by delusion. It’s the razor-thin sliver of hope that you might actually play well enough that you might not die.

There’s more possibility for survival in a 30-minute demo than in a game that can stretch to 80 hours. At a recent Dark Souls III hands-on session, I once again harbored such delusions, and for a solid 10-minute stretch, I somehow managed to survive. I owe much of this to still-fresh muscle memory and confidence from having beaten Bloodborne earlier this year. 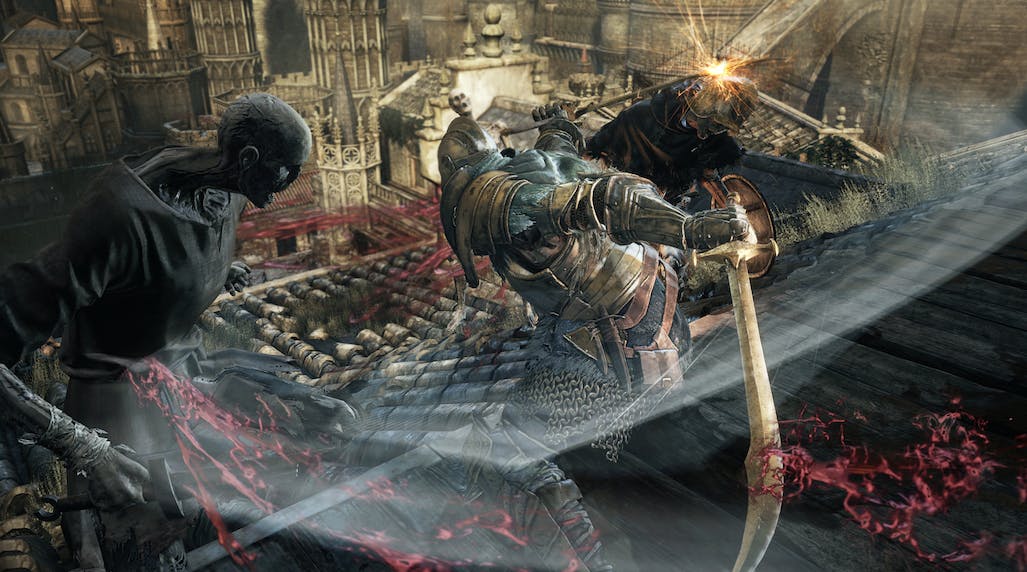 Of course, that streak didn’t last long. In typical Souls series fashion, the first defeat wasn’t a ceremonious, dramatic death at the hands of a boss. Instead, the game world slowly ground health out of me—a flesh wound here, a deeper cut there—as I tried in vain to find another health-replenishing bonfire. I was equal parts happy to be playing From Software’s latest and surprised that I’m so eager to die countless times.

Complementary to the warming comfort of knowing the controls and resources of a new Dark Souls game is the excitement and challenge of playing a new Souls game for the first time. I’ve lost count on the number of castles featured in this series. As any open-world, Tolkien-inspired fantasy game will remind you, there are seemingly limitless setting possibilities beyond the classic medieval castle. It’s gutsy that From Software would set the scene for my first hands-on session For Dark Souls III in yet another castle. The press event for this demo was thematically set in Castello di Amorosa in Calistoga, California, the same castle used in Koji Igarashi’s promotional video for his recent Bloodstained Kickstarter. 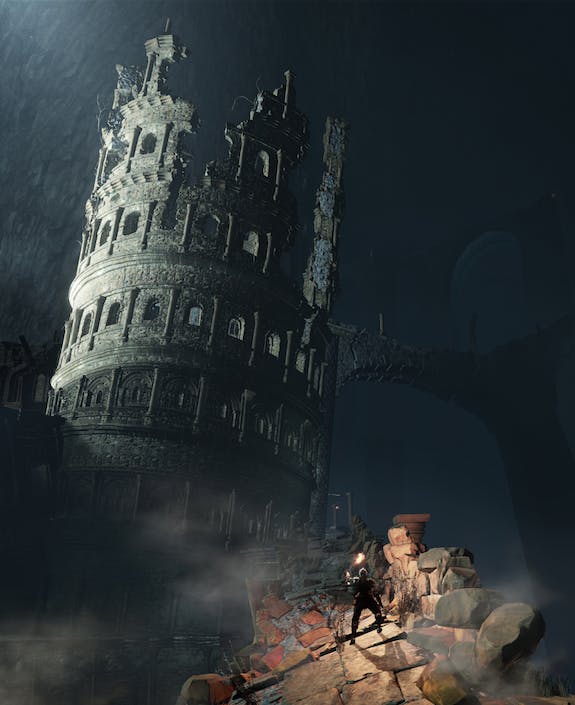 As with every castle in the series, this latest one feels worn and ancient. To add more than just a disturbing visual touch, the outdoor areas are littered with emaciated beings who are constantly praying for some reason. It’s reminiscent of the gaunt and ghoulish creatures in the bird bath and checkpoints in Bloodborne. For more Bloodborne influences, you need only look at the gothic spires in the distance. Exploring this fortress conjured memories of old school JRPG castles, particularly the symmetrical kinds with towers at its four corners. That’s not to say this castle in Dark Souls III is formulaic; finding another tower has as much potential to disorient you as let you get proper bearings within this seemingly labyrinthine stronghold.

For all its challenges, this demo is a marked contrast over the punishing Dark Souls II demo from 2013, the one that featured the imposing Old Knights in Heide’s Tower of Flame. That’s not to say this new demo is bereft of trials, ordeals, and surprises. While this is a fantasy world, the sudden appearance of a majestic, yet life-threatening dragon still made me yell a few obscenities in awe. It was an unsettling feeling to explore the castle while this dragon was perched on a wall, using its fiery breath to fatally roast anyone nearby. However I navigated my way around this stronghold, I knew I was close to this beast by the sound of its loud wing flaps. I suspect the bass from this sound effect would come across superbly over a subwoofer-supported home theater system.

As I type these impressions, it also occurred to me that not once did I think of confronting this dragon. That’s odd because I’ve slain many dragons in Dark Souls games. Without even having to ask the press event staff, From Software effectively communicated to me that this dragon cannot be dealt with, at least in this demo. However subtle, this is kind of information conveyance is an example of excellent game design. 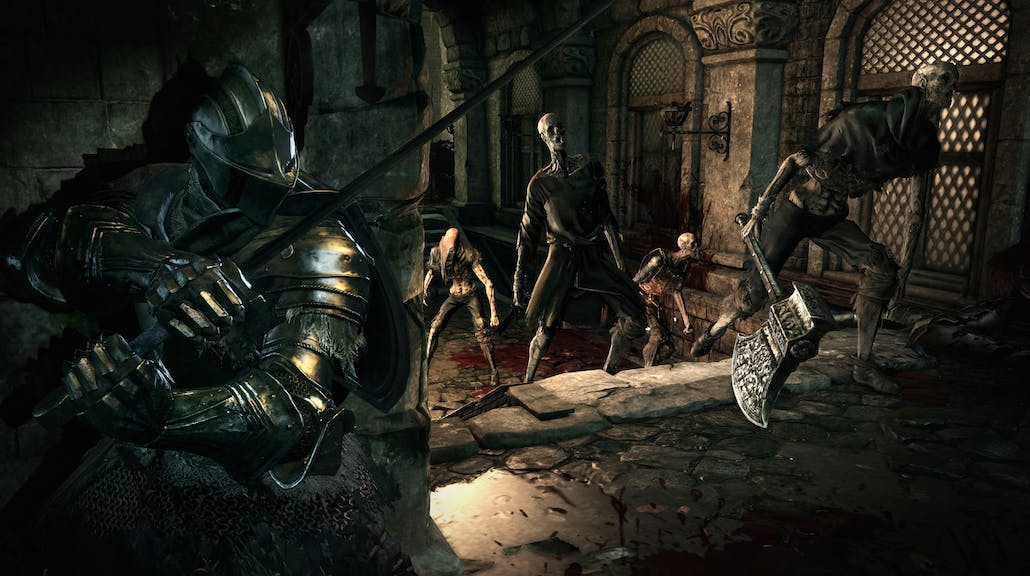 This would not have been a proper Souls demo if it didn’t end with a boss fight. Known as the Dancer of the Frigid Valley, this ethereal beast hopefully signals From Software’s propensity for imaginative bosses. After having too many humanoid bosses in Dark Souls II, it was refreshing to have a much wider variety of giant gatekeepers in Bloodborne. Dancer of the Frigid Valley is one such inspired opponent. Part Voldo (from the Soul Calibur series), part Vicar Amelia, and part Darkbeast Paarl (both from Bloodborne), this boss was definitely not human in form. This long-legged beast, moving with lanky motions and wearing a translucent veil, was a worthy adversary. I could sense that From Software assumed the most players already had prior dealings with Souls bosses, and thus, used Dancer to illustrate that experience can only take you so far. More often than not, these larger bosses are best dealt with up close, to the point that you’re dealing melee damage right at its legs. This tactic worked against the Dancer up until its health was at 50 percent. Unsurprisingly, it changed its moveset, which also forced me to leave that close proximity comfort zone. Its unpredictability became my downfall, which was fine by me. I knew that repeated playthroughs would lead me to figuring out the Dancer of the Frigid Valley, no matter how much it stepped up its aggression, a trait that is known to apply to all bosses in Dark Souls III. 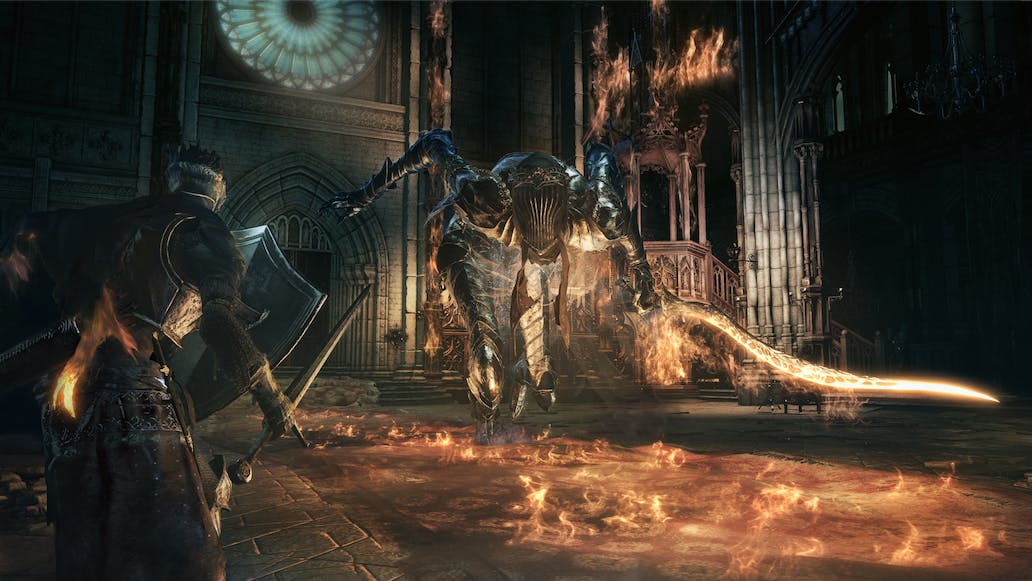 The most notable design addition to Dark Souls III is the new Sword Arts combat technique. The series is already known for its deep combat and the specificity of different weapon types. Sword Arts works as a combat modifier, adding a new special attack to a repertoire that already includes the standard quick and heavy attacks. These new techniques include a devastating two-handed blow and a powerful forward lunge that makes you invincible for a few crucial frames of animation. What makes Sword Arts so compelling is that these new moves are associated with whatever sword/shield combo you have equipped. For the first time in the series, I’m motivated to try out out every armament mixture there is, even with weapons I’m not familiar with. If Dark Souls III manages to carve an identity for itself, it might be because this Sword Arts combat sub-system will take players out of their comfort zones like never before. You can add me to the ranks of weapon test guinea pigs.

Hidetaka Miyazaki and his team at From Software have in their hands the rarest kind of game series, one where many design changes in later installments are not made to correct prior design sins but rather to simply try new things. Where can you say that about any other game series? Gears of War? Metal Gear Solid? When fans of a franchise are evenly divided on their choice of favorite installment, then you know you have something special.

Illustration via From Software