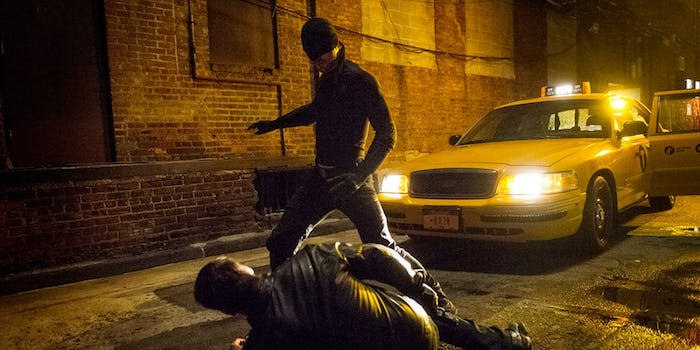 The renewal isn't a surprise; the new creative leads might be.

After just a week and a half on Netflix, Marvel‘s Daredevil has already been renewed for a second season.

Incidentally, Goddard, DeKnight, and Petrie are all Joss Whedon show alumni, much like the showrunners of Agents of S.H.I.E.L.D. Hopefully they’ll take some of Buffy‘s lessons to heart and hire women to work on the next season. In its first 13 episodes, the show has featured zero female directors and only one female writer, a record that inevitably led to the show having some problems with women.

Daredevil‘s renewal news was met with excitement from the many people who binge-watched the entire season last week, although it didn’t sit well with one corner of Marvel fandom: Agent Carter viewers.

So Daredevil's renewal gets fast-tracked but Agent Carter is still twisting in the wind?

Agent Carter aired on ABC in January and February, but its renewal status is still in limbo. But this isn’t the result of Marvel prioritizing Daredevil over a lesser-known property. It has more to do with where each show aired, because Netflix doesn’t have to track weekly ratings or pay attention to advertisers. If a Netflix series is popular from day 1, they can just renew it straightaway.

Daredevil‘s quick renewal was a predictable step for such a popular show, with the most surprising aspect being how soon the second season will air.

With Daredevil being the first of five Defenders series (followed by A.K.A. Jessica Jones, Luke Cage, Iron Fist and Defenders), Marvel’s announcement suggests that Daredevil‘s second season will air before the final Defenders team-up—and possibly before the first season of Iron Fist. At the moment, it looks like the order will be A.K.A. Jessica Jones later this year, then Luke Cage in early 2016, followed by either Iron Fist or the second season of Daredevil.