ConTV is bringing geek convention culture to the Internet

The streaming network has steadily grown a following by bringing the atmosphere of a con to the Internet.

If you don’t have any upcoming fan conventions in your neck of the woods this holiday season, you can always convene for a virtual one in an odd place: ConTV.

Billed as “the first network devoted to Comic-Con,” the network, which launched in March, is a newcomer to the streaming scene, but it’s made a name for itself based on a rare combination of ingredients: a wealth of deliberately niche content with appeal for geeks everywhere. The network is a partnership between Cinedigm and the convention production company Wizard World, which produces pop-culture conventions throughout the year.

About a million fans a year walk through the floors of Wizard World’s conventions, so it made sense for the company to build an online presence to capture that audience for more than a weekend out of the year.

But how do you bring convention culture to the Internet? 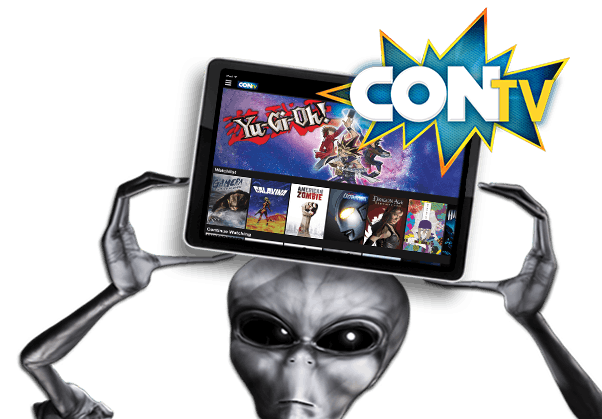 ConTV’s website boasts an array of content tailored to the garden-variety geek: lots of vintage B-movie content, a martial arts collection, creature features, cult horror, Saturday morning cartoons, anime, and sci-fi and fantasy classics. But there are also notable streaming events, like a live viewing of cult classic Hell Comes to Frogtown with a guest appearance from the film’s director and star. The company has even partnered with Rifftrax to stream select films like Birdemic with built-in mock track. And as for original content, the network snagged none other than Bruce Campbell to host Last Fan Standing, a quiz show utilizing the geekiest concept ever: geeks quizzing each other on geek culture trivia.

It all seems like a cool built-in concept, but is it enough to simulate the community and unique atmosphere of a fan con?

“The inmates are running the asylum,” is how Erick Opeka describes the programming concept behind ConTV. Opeka is the Executive Vice President of Digital Networks at Cinedigm and a member of the ConTV Board of Directors. He’s in charge of ConTV programming, and talked to us about the network’s strategy for reaching geeks in their own corners of the Internet, then letting them dictate the site’s content.

“If you look at the lineup of cable networks, fandom culture has pervaded everywhere,” Opeka says, “but there really isn’t a channel or platform that’s 100 percent devoted to it, in terms of having both premium content and produced content.

“If you go to one of these events, there’s a similar level of diversity, and what you notice is that there is no overlying fandom. Some of the circles overlap, some of them are really far apart. You have comics fans, sci-fi, horror, anime fans, steampunk and other things. But the connective tissue is that there’s a community that people enjoy meeting and talking to about this content.”

Opeka tells us that nostalgia is a big part of creating that atmosphere—catering to people for whom Saturday morning cartoons in the ’80s and the ’90s were a big deal. But ConTV has also been experimenting a lot with its livestreams of films, often featuring live commentary with chat. Opeka describes it as “appointment programming,” a kind of online viewing party—“almost a hybrid of MST3K and a nerd podcast.”

And more fans are showing up for this atmosphere all the time. “In terms of downloads, registered users, and subscribers, we’ve exceeded our expectations,” Opeka says.

“And we’ve been surprised because we thought we needed bigger shows—the Doctor Whos of the world—but we found that what ‘superfans’ are really looking [for] are things that are curated and aren’t really available on the ‘big three’ services, or live experiences those services don’t provide.”

Opeka tells us that in the near future, ConTV is focusing on creating more live events that tie into what’s going on in fandom space. In-person participation is one of the highlights of any convention, so ConTV has been trying to conscientiously augment that experience. “One of the things we’ve been doing at cons is livestreaming panels, and curating programming around panels and coordinating partners on panels,” Opeka says.

For geeks who love attending panels at cons, ConTV hopes to stream footage of panels on a wide variety of topics, from folklore to superheroes. The aim, according to Opeka, is to offer “very, very tight correlation between big events and the programming available on the service.”

The long-term goal is to tie ConTV programming to several major events around the year. Opeka equates the concept to other “fandom discovery services” like Reddit, Tumblr, and BoingBoing: a place where fans can both find content they love and convene around media and other events that impact their community.

“The emphasis needs to be on rapidly iterating the service to reflect the tastes of the people who are using it,” he says.

So what about fan films, fanvids, and other fan-created content? That’s on the way, too, Opeka promises—the issue is figuring out how to fit fan-created content into the mix alongside a variety of studio content, vintage shows, and independent media.

Opeka says the biggest block of the network’s original programming comes from its live coverage of convention events—the company hopes to do about 30 of those a year. But ConTV also has plans to working with Campbell and other celebrities on shows like Last Fan Standing. “Bruce works closely with the Wizard folks, and he had done a version of that show for the soldiers and thought it would make a great format to try out for ConTV,” Opeka explained. “We really loved the show and are exploring what to do with him in the future. And we’ve got 5 or 6 other new shows in the hopper that we’re working on for early release next year.”

He also promises that the network has a surprise coming up for Star Wars fans. Coinciding with the release of The Force Awakens, “We’ll have a lot of interviews and curated programming culminating in a big live event.”