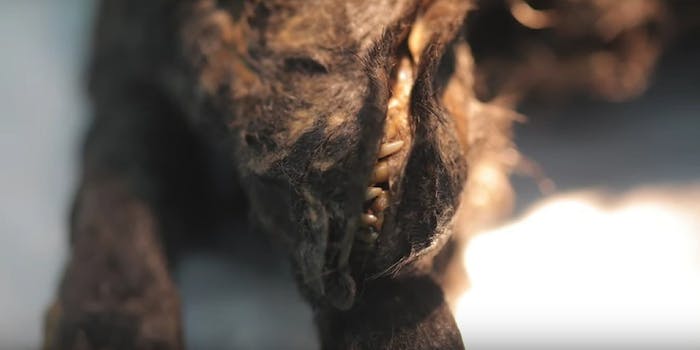 Not only is it hard, but it's also ethically dubious.

Researchers in Russia are preparing to conduct a post-mortem analysis on the well-preserved remains of a 12,500-year-old dog. The puppy is believed to be a littermate of the Tumat dog, an animal thought to be a close relative of the domestic dog discovered in Russia in 2011.

Controversial researcher and cloning expert Hwang Woo-suk collected samples from the dog in the hope of duplicating it and possibly reviving its species. But cloning an extinct animal isn’t exactly easy.

You need quite a bit of the original genome in order to clone an extinct species. The genome is usually in fragments, requiring researchers to piece it back together like a puzzle. One problem with this approach is that DNA, even when it’s well preserved, breaks down over time. Researchers trying to clone species that went extinct as recently as 1936 have found that piecing together the genome was a difficult venture.

Even efforts to clone the wooly mammoth, which went extinct only about 4,500 years ago, have been unsuccessful.

Another problem is that, if researchers can clone a viable embryo, they then need a surrogate mother to carry the animal to term. This can also present challenges because the embryo needs to be at least somewhat biologically compatible with the mother.

De-extinction projects are also the subject of great moral controversy among researchers. They must ask themselves the question, “Are we too busy asking ourselves if we can and ignoring whether we should?”

Woo-suk has been a central figure in this debate. His lab in Seoul, South Korea, is a leader in the effort to clone the wooly mammoth. Woo-suk told the Daily Mail that he was “very satisfied” by the quality of the preserved animal, suggesting that he’s confident he can clone it.