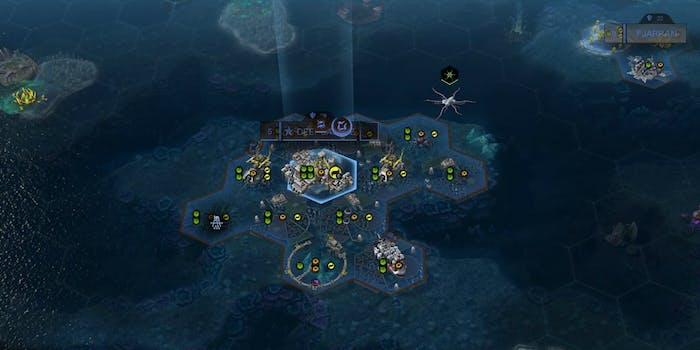 Rising Tide brings a fresh current to Civilization: Beyond Earth

The new expansion fills in some important blanks.

Traditionally in Civilization, the ocean is just a natural barrier you’ll explore for artifacts and ruins. You might build a city on an island, but the sea hexes themselves aren’t a big part of the game.

The same was true for Civilization: Beyond Earth, and that’s where the Rising Tide expansion comes in. Rising Tide allows you to build aquatic cities and to improve sea hexes to increase resource production, just like you would with a land-based city in Beyond Earth. The suite of naval units in Beyond Earth is necessarily more diverse, owing to the need to defend your aquatic cities, and/or to attack the enemy’s.

The new, ocean-based mechanics breathe some fresh life into Beyond Earth, but perhaps not as much as the new diplomacy and affinity systems introduced by Rising Tide. The need to more carefully manage your diplomatic relations with other leaders, and the ability to more carefully guide the cultural development of your civilization with new UI tools and customization options, will change the way you play Civilization: Beyond Earth regardless of whether you build cities on the ocean or not. 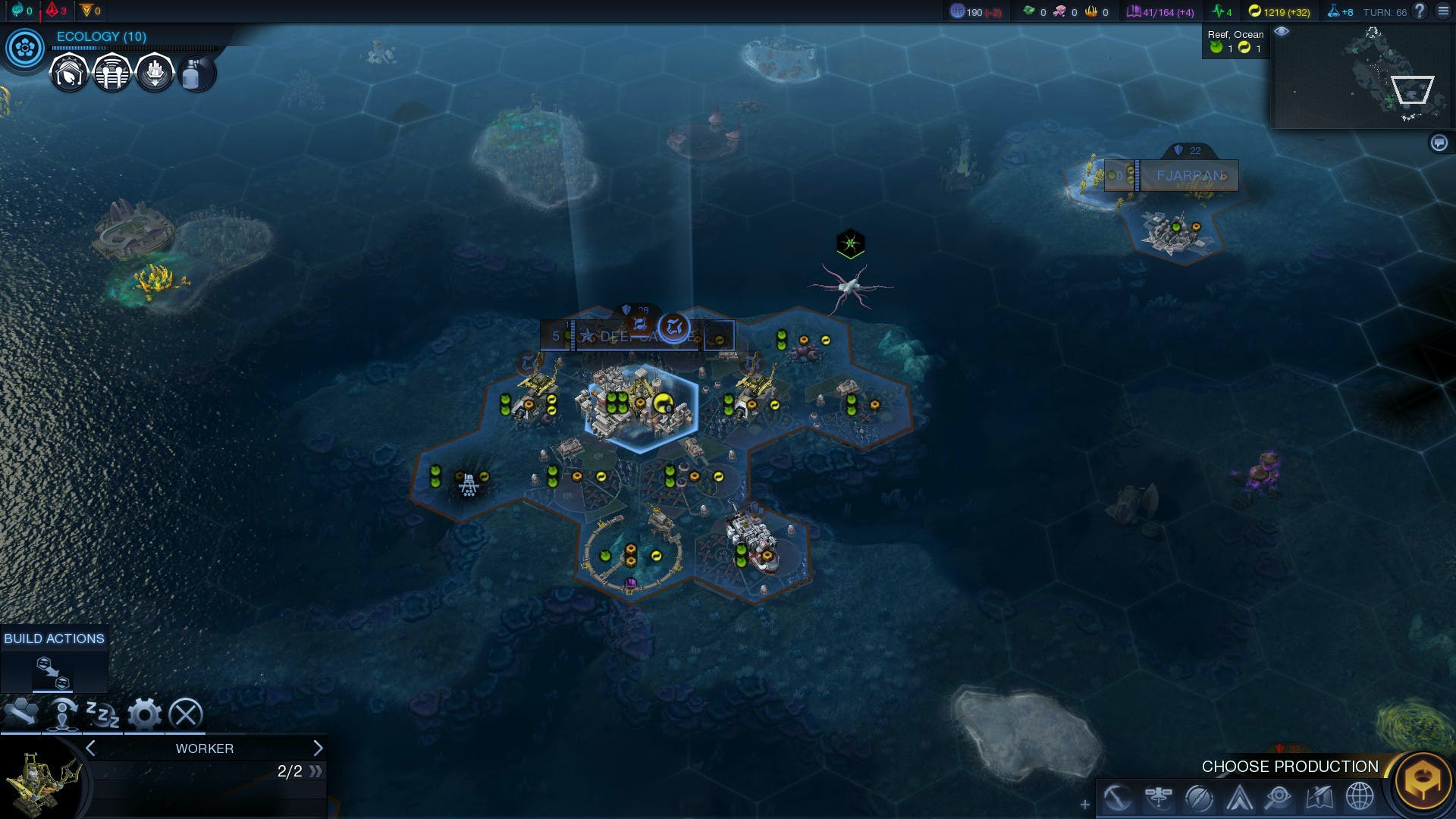 The chief advantage of aquatic cities is their mobility. Once you’ve completed some basic scientific research, you can move an aquatic city anywhere on the ocean, at any depth of water. If the continent you’re building your civilization on begins to feel like a security risk, i.e. if you have too many military-minded neighbors around, you can literally pick up and move.

Abandoning the improvements you make to sea tiles around an aquatic city is no small matter, but the ability to make yourself a less attractive target for your enemies, should they begin encroaching on your borders, comes in handy.

When an aquatic city moves it “paints” the six hexes around it, and this is how aquatic cities grow, rather than using Culture to increase the city’s boundaries. Mixing and matching land-based and aquatic cities means having the ability to seize territory while moving aquatic cities along the coastlines of your civ.

If you haven’t granted free movement through your territory for your allies, extending the borders of your civilization by using aquatic cities to claim hexes far from the coasts keeps prying eyes further away.

You can also use aquatic cities as forward bases of operations for military action, opening up new fronts for flanking maneuvers by using aquatic cities as mobile beachheads for invasions. This can be very risky—you need a navy large enough to protect the city as it moves into position. Alien Hydracoral is always spreading on the water and needs to be destroyed to clear your path. 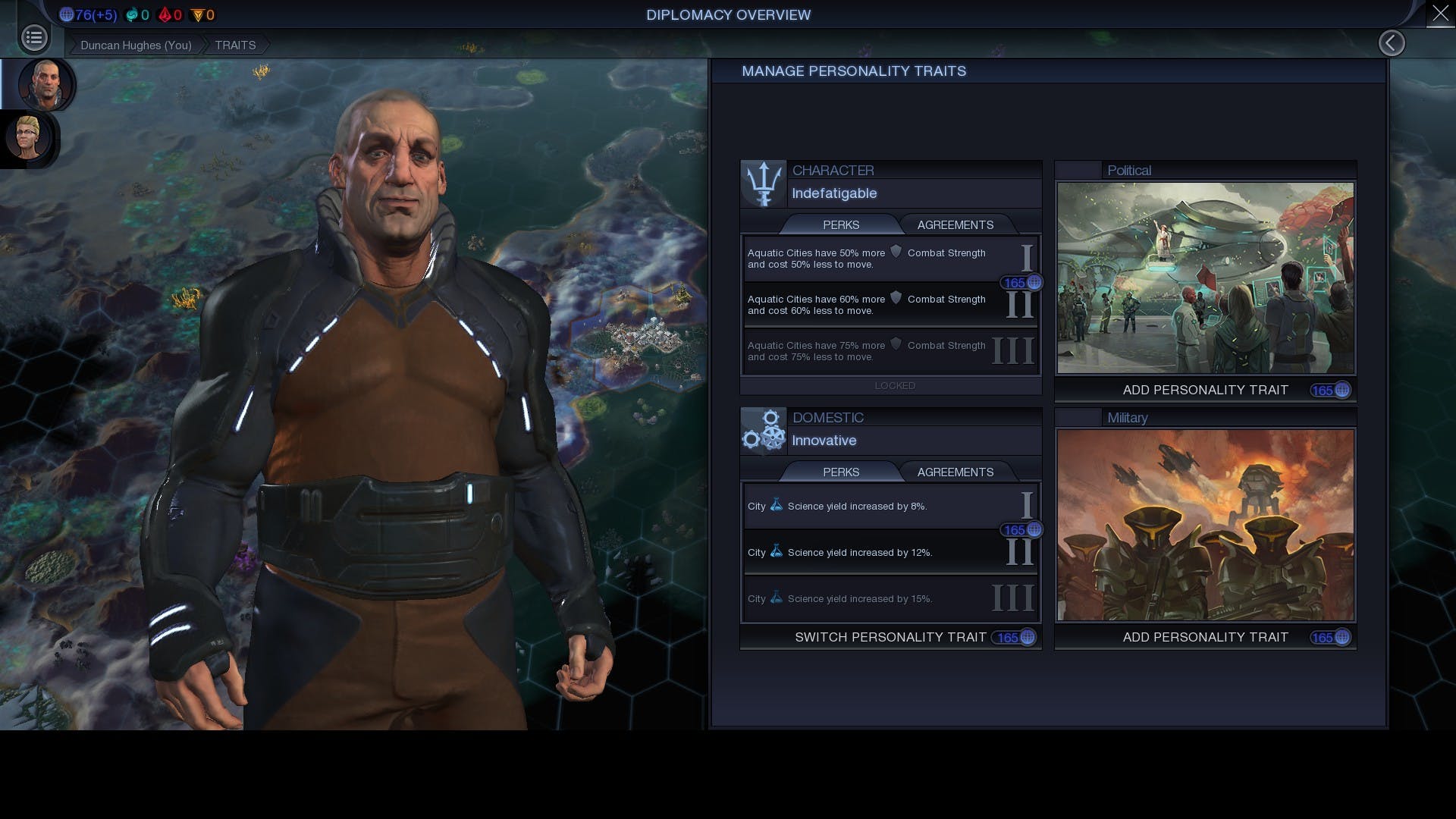 In most Civilization games the leader you portray is largely a faceless, omniscient presence giving out instructions, and the leaders of the other civilizations repeat the same platitudes and narrow range of opinions ad nauseum.

In Rising Tide, your leader feels more like a bona fide character that you grow and develop, and the other leaders in the game feel like characters as well.

Diplomatic Capital is the currency introduced by Rising Tide that fuels the new diplomacy system. Diplomatic Capital is used to buy Traits for your leader, for example. The initial, inherent advantage of your civilization, like increased production benefits or superior covert operations skills, is your leader’s initial and unalterable Trait.

Over the course of the game you can purchase additional Traits that change the benefits and behavior of your civilization and increase the benefits of the related perks, as long as you have the Diplomatic Capital available to do so. Your leader’s Traits also dictate the kinds of Agreements you may enter into with other leaders. 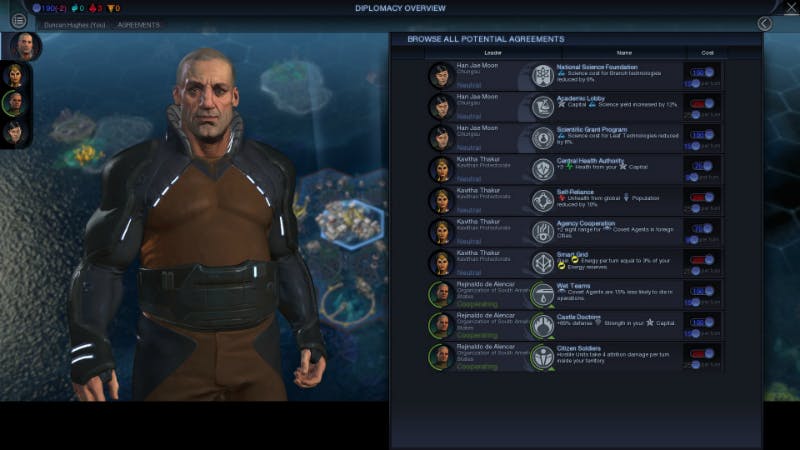 Diplomatic relations in most Civ games are the most simplistic of arrangements. Declaring war, making peace, trading resources for technologies, and forging alliances are the main interactions between leaders, and you always have precisely the same choices with each leader, subject only to whether you are allied, at peace, or at war.

In Beyond Earth, Diplomatic Agreements are more specific, and can be more subtle in their effects. And because the potential Agreements available are subject to your leader’s Traits, there’s inherently more variety in the sorts of Agreements you can make over the course of the game.

Rather than having to click on a city belonging to another civilization and then asking to speak to its leader, you can view all the potential agreements available to you, with all the other leaders in the game, on a single screen.

You can still play the xenophobic leader who’d rather not engage with their neighbors in anything more complicated than trade routes between cities, but the intricacy of the diplomacy system in Rising Tide may make diplomacy more worth your time and attention. 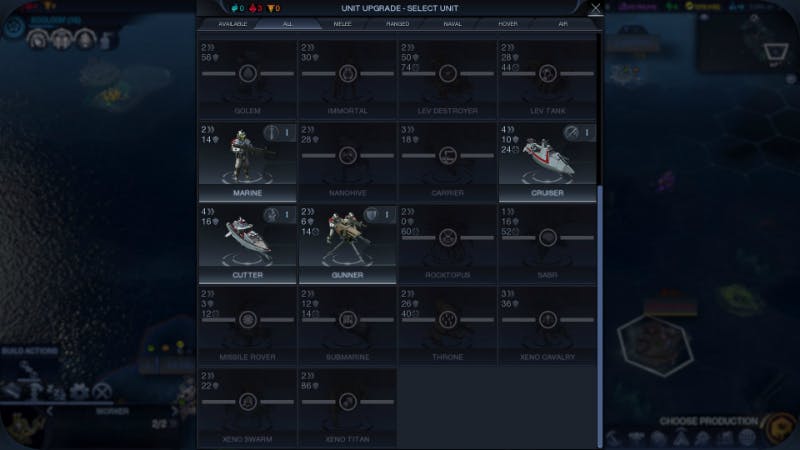 In Beyond Earth, Affinities expressed your civilization’s relationship to the native life on the alien world you’ve colonized, and whether you intended to stick with humanity’s old ways, or evolve into something new.

You had three Affinities to choose from: Purity, Supremacy, and Harmony. Rising Tide introduces hybrid Affinities that double your options. Purity/Harmony, Harmony/Supremacy, and Supremacy/Purity are new choices that lead to different combinations of perks and benefits, and grant you more specific control as to how your civilization develops.

Affinities most directly affect your civilization via the military benefits to your units, and in Beyond Earth applying and keeping track of those perks—granted individually to different types of units—meant selecting the unit type and opening up different windows for each. Rising Tide puts all of your military units onto the same chart, which makes it so much easier to keep track of which units have received upgrades, what upgrades they were, and what Affinity they were tied to. 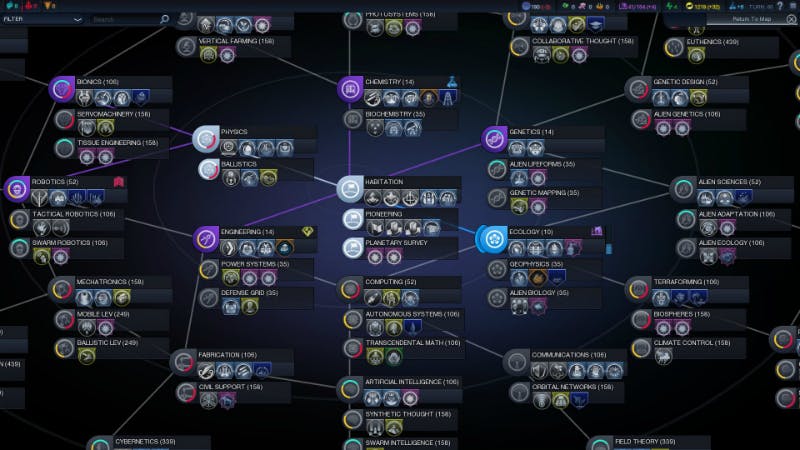 Your leader is also affected by Affinities in Rising Tide, unlocking leadership perks related to the Affinities your civilization adopts. The Tech Web—the chart of technologies you can research during the game—features UI changes tied to monitoring and employing Affinity bonuses. You’re probably more likely to be sifting the Web for technologies related to achieving victory conditions or improving resource production than anything related to Affinities.

In Rising Tide, the Affinity bonuses conveyed by a technology are identified in the technology’s label via color-coded bars. If you see a red bar on the tech’s label in the Web, that tech has Purity benefits, for example. This, like the simplified military unit charts, makes it easier to engage with the Affinity system and incorporate it into your strategies. 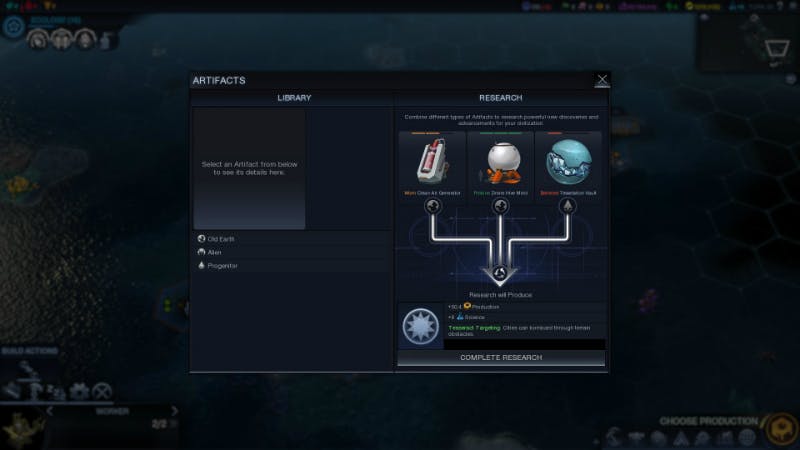 The UI changes to the Tech Web are one of a few changes that all Beyond Earth players get to enjoy, regardless of whether they purchase the Rising Tide expansion or not. Firaxis has also added new art to pop-up messages that makes the pop-up windows less dull, and also conveys an idea as to what sort of information you’re receiving.

The final addition to Beyond Earth, available only to Rising Tide players, is the artifact system. You discover artifacts in archaeological digs, crashed satellites, or alien ruins among other places. Then you can research them to generate bonus currencies like production and energy and unlock new buildings and other upgrades.

Some of the descriptions of the artifacts contain lore about what Earth was like prior to the “Great Mistake” that forced humanity to abandon Earth for the stars. The civilizations you develop in Beyond Earth can feel decidedly alien by the end of the game as you guide humanity evolution past its historical constraints.

Having these narrative ties back to old Earth, these little reminders of where the colonists come from, is a nice way to ground the universe of Beyond Earth in the Civilization franchise as a whole, reminding the player about humanity’s past.

The artifact descriptions are another example of the way Rising Tide layers new, compelling content onto the framework of Civilization: Beyond Earth.

Disclosure: Our review copy of Civilization: Beyond Earth – Rising Tide was provided courtesy of 2K Games