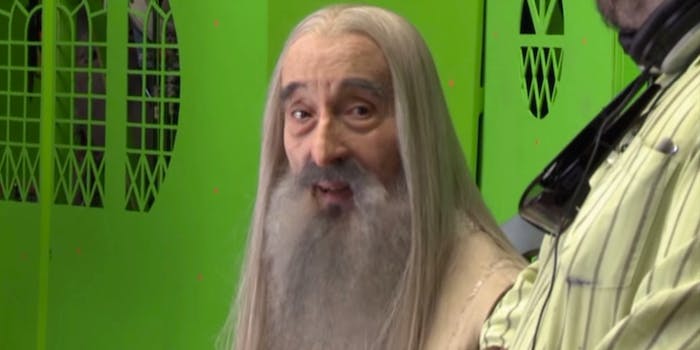 The cast and crew joked around on his last day on the set.

National treasure Christopher Lee has still got it.

The 92-year-old actor, an accomplished performer in his own right, also stood out among the Lord of the Rings cast because he was the only one to have actually met author J.R.R. Tolkien. Lee is a massive fan of the books, which he re-reads once a year, according to his autobiography. He dreamed of playing Gandalf before he was physically unable to do so.

Because of his age and physical condition when he filmed his scenes for The Hobbit, Lee was unable to fly out to New Zealand with the rest of the cast. Instead, the crew traveled to London to film him. The camaraderie and fellowship between him and the rest of the cast is still there, however. They so revered him that they flew out just to see him do his final scene for An Unexpected Journey back in 2011.

As you can see in the video below, Lee was clearly having a good time. The video itself went online in July, but it is getting a second life on Reddit as An Unexpected Journey premieres in the U.S.

Say what you will about the Hobbit films, but it gave us more Christopher Lee, and that can only be a good thing.