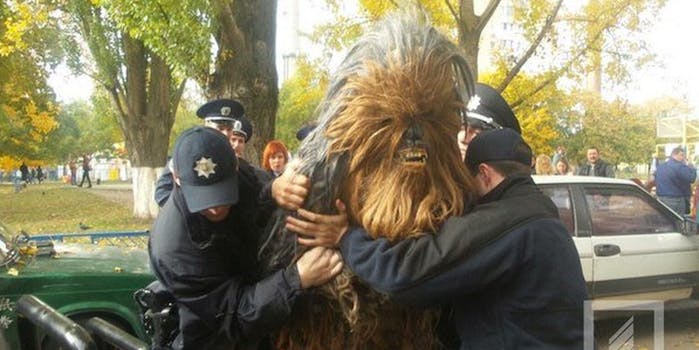 Chewbacca arrested after campaigning for Darth Vader in Ukrainian election

Chewbacca and Darth Vader are both major figures in the Ukrainian local elections. No, seriously.

Election season in Odessa, Ukraine is getting weird. Real weird.

Ukraine’s Internet Party is best known for its high-profile mayoral candidate Darth Vader (yes, that’s his legal name), who campaigns by dressing in a Vader costume and blasting the Imperial March as his theme music. One of his best publicity stunts took place on Friday, when he unveiled a statue of Lenin that had been modified to look like the Sith Lord.

Because this was the work of the Internet Party, the Vader statue also provided a public service as a Wi-Fi router. Truly, they’re putting most joke candidates to shame.

Ukraine’s local elections took place on Sunday, and you probably won’t be shocked to hear that the Internet Party has drawn attention to themselves once again. This time, the star of the show was Chewbacca.

Photos posted by Twitter user @kh_reader show a person in a Chewbacca costume being arrested by a team of Ukrainian police. Apparently, Chewie and Darth Vader fell foul of Ukrainian election law by causing a disruption and blocking the road near a local polling station.

Chewie has since been released, but not before appearing in one of the best arrest photos we’ve ever seen.

Chewbacca appears in Odessa court after being detained by police. Released with a warning. https://t.co/Mb2B7clV5Z pic.twitter.com/AezmqvgGxE