'Captain America: Civil War' gave Sharon Carter one of the most iconic moments from the Civil War comics.

Marvel Studios movies are rarely a direct adaptation from the comics, but they’re always packed with Easter eggs and callbacks for fans. In Captain America: Civil War, the best of these moments went to Sharon “Agent 13” Carter.

The scene in question depicts Sharon (Emily VanCamp) giving a speech about her aunt, Peggy Carter, who carved out a career in espionage after WWII. At this point in the story, Steve Rogers is still undecided about the Sokovia Accords, which call for U.N. oversight. This secondhand advice from Peggy cements his resolve to break away from the Avengers and oppose the Accords:

Marvel fans will recognize this as a version of a famous scene in the Civil War comics, when Captain America persuades Spider-Man to switch sides and fight back against the Superhero Registration Act. 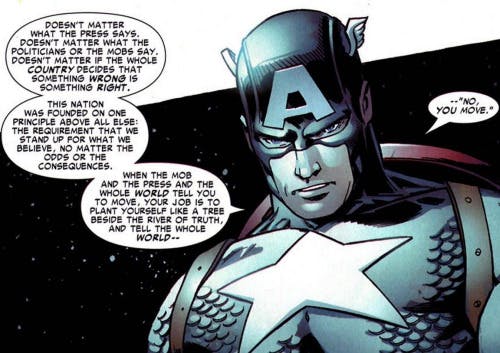 This speech is seen as an iconic illustration of Steve Rogers’ attitude toward superheroism, but the switch to Sharon and Peggy Carter works surprisingly well in the context of the movie franchise. The movie version of Captain America is far less sure of himself—especially on a personal level—regarding his relationship with the other Avengers. Even through a mouthpiece, advice from Peggy reminds him of what really matters and encourages him to focus on his own convictions.

It also works as an interesting character note for Sharon Carter, who doesn’t get much personal screen time to work with. Despite working for the CIA, this speech hints that she’s more of an independent thinker than you might expect and wouldn’t blindly obey orders that she didn’t support.

The impact of her words certainly weren’t lost on Captain America fans. Perhaps more great things are in store for the former S.H.I.E.L.D. agent.