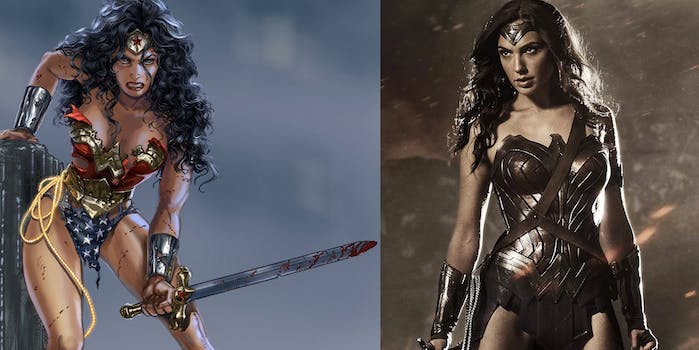 Ryan Reynolds, you knew this would happen.

The post-Deadpool R-rated movie glut has begun. Batman v Superman, the upcoming English-language adaptation of Death Note, and the third Wolverine film are all courting audiences with R ratings. Death Note will aim for an R rating while Batman v Superman is adding extra R-rated material to its theatrical release.

Just as we feared, Hollywood’s primary takeaway from Deadpool‘s success seems to be that R-rated movies are bankable again. While this is good news for mid-budget films, Hollywood producers, and violence-loving movie goers, it’s probably not good news for superhero movies.

The reason Deadpool had to be an R-rated movie was because Deadpool is an R-rated character. The only character deadlier in the Marvel-verse than Deadpool is Wolverine. In the case of the new Wolverine movie, the rating is not yet confirmed, but it’s considered highly likely for many of the same reasons that Deadpool’s R-rating was considered an asset: These characters kill, and kill often.

Despite their popularity, Deadpool and Wolverine are rare exceptions to the rule of thumb that superheroes not only don’t kill people but strive to get by with as little bloodshed as possible. When Wonder Woman’s storyline got grittier and bloodier in the ’90s, for example, many fans considered the developments in her storyline to be a betrayal of her legacy of pacifism.

A popular argument fans of harder content like to make is that an R rating allows for more drama and intensity in storytelling—that the plot isn’t hobbled by ratings concerns. But that should only matter when the story requires that level of extra intensity to gain impact. Given how much violence the average PG-13 movie can get away with, filmmakers rarely need to cross the line into an R. (Remember those gritty Dark Knight movies? All PG-13.) In the case of Deadpool, the R rating makes sense because that’s kind of Deadpool’s thing. Obscene jokes aside, his entire character arc revolves around his extremely dark backstory and the antipathy towards extreme violence that it produced in him.

For a movie like Batman v Superman, however, there’s less narrative reason to justify a whole lot of bloodshed. Batman’s perpetual grimdark moodiness has become cliche to the point it’s almost entirely lost its effectiveness. Instead of countering this, Warner Bros. seems to think more darkness and violence is what fans want.

This might play well in another franchise; but not with these characters. Batman’s strict moral code and his reluctance to kill is one of the things that make him who he is. Meanwhile, in Man of Steel we saw Superman basically wipe out a huge swathe of the East coast and then brutally kill one of his worst enemies. The destructive, grim ending sparked a fierce backlash by fans against writer David Goyer, who they accused of betraying Superman’s idealism and commitment to heroism. And all that was happening with a ‘PG-13’ rating.

While some roll their eyes at his American hero schtick, Superman is a perfect foil to Batman’s angst. But to be that foil, he needs to exist in a universe that allows him to continually choose hope rather than cynicism. An R rating might satisfy fans who want more violence, but it would push Superman’s character even further afield. And kicking off the Justice League mired in doom and gloom would set a terrible precedent for an ensemble team-up that’s already competing with a team literally called “Justice League Dark.”

Not only is “R-rating good” exactly the wrong thing to take away from Deadpool‘s box office coup, but emphasizing the rating as a marketing tool could undermine the effectiveness of the stories.

Maybe this craze will pass before we wind up with gratuitous R ratings for Doctor Strange and Wonder Woman. There’s over-the-top, and then there’s just plain wrong.