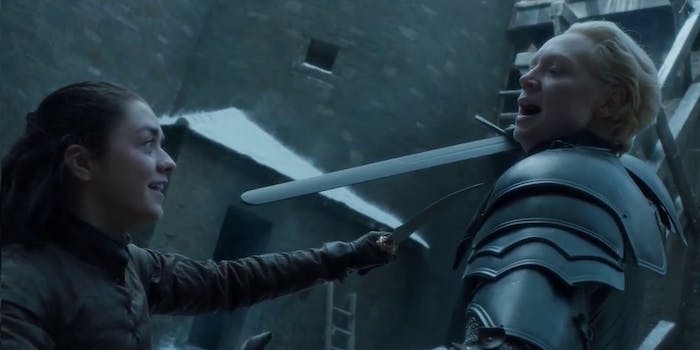 This fight scene required a unique kind of choreography.

Brienne and Arya’s duel was one of the coolest moments in Game of Thrones season 7, showcasing how much Arya had learned since the two warriors last met.

In a new clip from HBO‘s behind-the-scenes documentary series, you can see how Maisie Williams and Gwendoline Christie trained for the scene. It’s a pretty unusual fight, matching two women with very different body types and fighting styles. Christie has some interesting insight on how body language plays into characterization—as you’d expect from the actress who played Captain Phasma in Star Wars, a character who wears an expressionless helmet in every scene.

And be sure to watch for Arya’s awesome knife flip at 0:38. How did that not make the cut?

Now you’ve seen this, we recommend rewatching the duel itself. The actors’ performance may seem even more impressive now you know the work that went into it!