Breakaway is tailor made for Twitch success.

The lights start to dim in the Symphony Hall theater in San Diego, where Amazon Game Studios is about to announce its first PC title. The hum of talk from the influencers, TwitchCon attendees, and Twitch streamers in their seats fades as the trailer plays on the big screen above the stage.

Within a few seconds the mythological influences are obvious, as characters that look like Spartan warriors and Vikings flash across the screen. The game is called Breakaway. It’s a 4 vs. 4 brawler with sports influences, and it’s now officially in alpha. To cap it off, Amazon has included integrated features like the ability to create your own community, so Twitch streamers have more incentive to play the game.

Breakaway’s maps are based on fabled locations like Atlantis and El Dorado, with the entire arena viewable at all times. Players can choose from warriors such as Spartacus or Alona the Aztec-inspired sun priestess, and use their unique skills and Buildables—structures that individual players can build to hinder their opponents—to control the glowing, round Relic to get it into the enemy’s base. They can also team-wipe the opposite team before any of them can resurrect, thus winning the game—all in just four-minute matches. 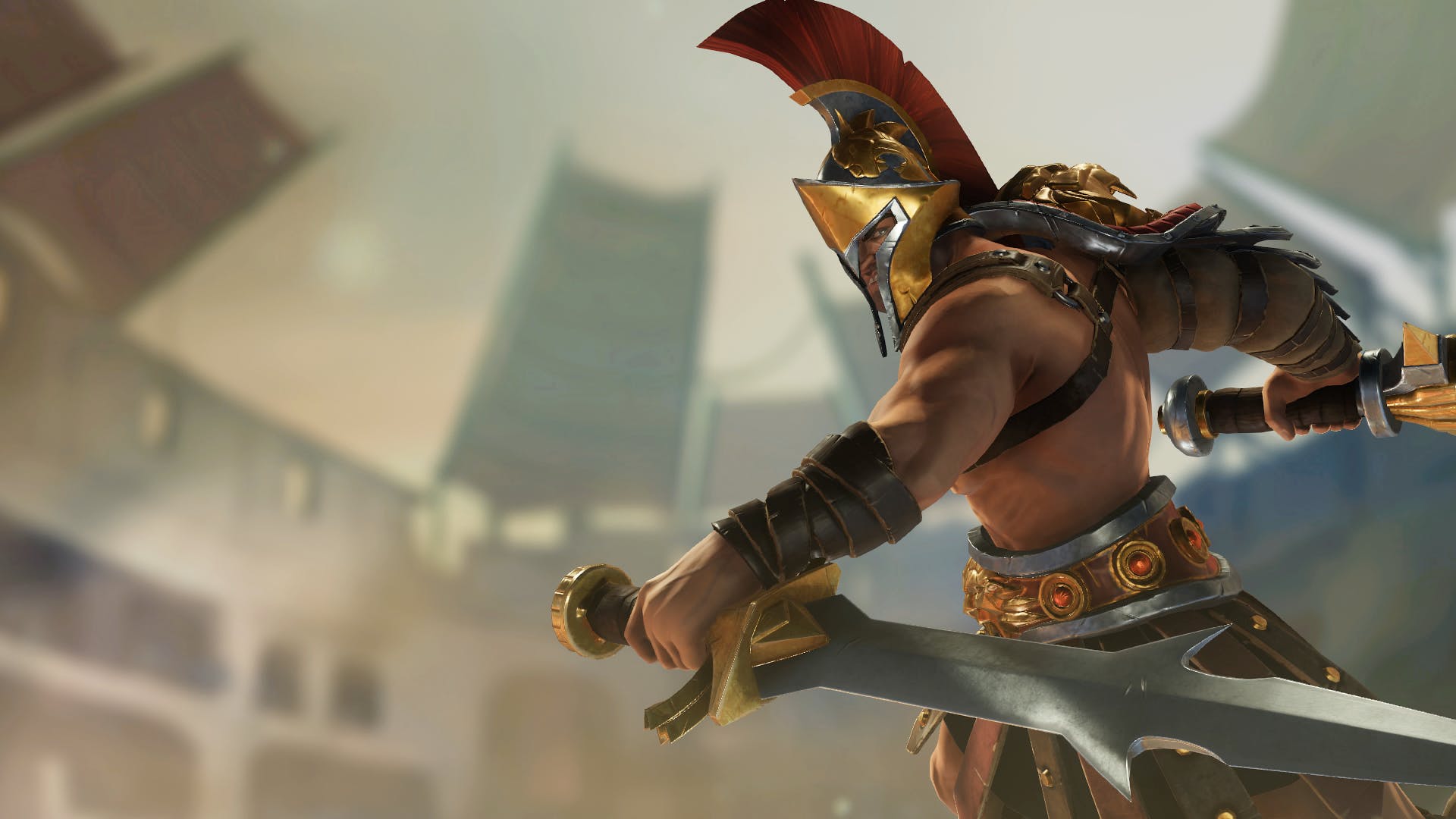 “The idea was really based around the greatest warriors of all time,” Studio Head for Amazon Games OC, Patrick Gilmore told the Daily Dot. “Then we started to associate them with places, we started talking about El Dorado, Valhalla, but then other places like Avalon, and how these places have such a deep-rooted place in world lore.”

From there it wasn’t much of a stretch to look at things like the Aztec ball court to see how it could fit into the game. The result is a half-mythology, half-sport mashup in which “sometimes not all the pieces fit perfectly, but then you play it and it works,” Gilmore said.

Yes, Breakaway can be chaotic at first. It took the first two games out of a best-of-five series to figure out why my team kept losing when I gave it a try. The Relic is on the map the whole time, and it doesn’t show up a few seconds into the game like we assumed. Our opponents made it to our base while we were still figuring out the buildables and attacks. Taking the time to pick the right warrior, and learn the buildables and stat upgrades is a must before you start playing. While this can seem tedious, the short game time makes it necessary.

The four-minute timer is actually a very tactical decision on the part of Amazon Game Studios. The Breakaway team discussed it at length, looking at traditional sports like basketball and hockey that have a continuous flow. They decided they wanted something with more intensity spikes, like football with its huddles and time for strategic decision making before the action.

“Those time restrictions, we just realized they were super compelling and they fit really well with broadcasters who need a moment to interact with the chat or do whatever,” Gilmore said. “It became this organic thing that worked really well for the game as well as for Twitch.”

Besides giving broadcasters the time in-between matches, Breakaway has three unique features that give it an edge on Twitch. The broadcaster spotlight feature notifies players when someone in their game is streaming, metastream is a customizable OBS with real-time stats so commentators can give more depth, and the broadcaster match builder allows streamers to create communities and games just for their viewers.

“Some of the guys on our team have this attitude that every game is its own social network, you build relationships in the context of the game,” Gilmore said. “A broadcaster can basically say, ‘This is my version of Breakaway, and my community can come in and play, and we, as a big 10,000-person group, can have a great time together, and it’s just us.’”

Just imagine an entire Twitch community with its own little space in the game. Then add on top of that the ability for viewers to use metastream to commentate games themselves, using the data in the OBS to look at who will win a fight between two characters, or the builds that all the players are running.

“When you’re watching the World Series of Poker, or a baseball game, or a soccer match, having statistics about what’s happening and what the probabilities are, and how a particular team plays or doesn’t play, makes it more fun to engage with and watch,” VP of Amazon Games, Mike Frazzini said. “So we thought, ‘We want to be able to pump out as much data as possible.’ Broadcasters can collect that data and organize it and present it to people watching in a way that makes it more interesting.”

Metastream also opens the gates for Breakaway to become an esport. That’s not Amazon Game Studios’ goal right now, but the Breakaway team would support the scene if it were to emerge organically from the community itself.

For now, the team is focused on listening to the alpha players’ thoughts on the game, the seven released characters, and creating more content (although there’s no planned release schedule yet). While the current game mode is the only one released as part of the alpha, Amazon is making no claims that it will be the only mode in the game.

“We have ideas for more maps, more characters, different ways you might be able to play, all these different things in our head,” Frazzini said. “But ultimately we want to get out of the stage where we’re just guessing, and get it into the mode where we’re actually interacting with customers and the community and building it in that collaborative fashion.”