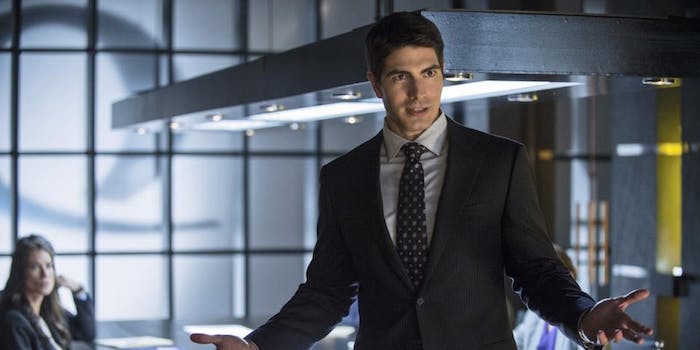 ‘Arrow’ producers considering a spinoff series focused on the Atom

Brandon Routh may be getting a TV spinoff for his second DC Comics superhero role.

Brandon Routh is best known for playing Superman in Superman Returns, but recently he’s taken up the mantle of a lesser-known DC Comics character.

In the third season of Arrow, Routh plays Ray Palmer, the alter-ego of a superhero known as the Atom. He’s your typical Tony Stark type: a rich, successful scientist who builds a super-suit so he can fight crime. In the comics, his suit allows him to shrink to a tiny size—hence the name. In the TV adaptation, it’s unclear what the suit will do; it’s possible that shrinking won’t be one of his abilities. Executive producer Marc Guggenheim has said that “there’s no real compelling reason for us to do super powers on Arrow.” On a more practical level, doing so would also require some pretty expensive special effects.

Regardless, Arrow‘s creative team sees real potential for the Atom on a bigger stage. In a new interview with Nerdist, Guggenheim mentioned that the producers are in “preliminary” discussions about creating a spinoff television series for Routh’s Palmer/Atom character, much like they did with actor Grant Gustin on The Flash.

“The thing that we’ve been talking about is just how do we further expand the universe,” Guggenheim said, “and we love Brandon and we love having him on Arrow.

“Brandon’s so terrific and embodies the role so well that when we talk about how to further expand things, he’s a natural person to talk about,” the producer added.

While the talks are tentative and plans could be scuttled at any point, this is definitely good news for fans pining for an Atom spinoff. It also helps that Brandon Routh is already well known to DC Comics audiences thanks to Superman Returns.

An Atom series would fit with the idea that the CW is trying to expand The Flash and Arrow into a wider universe of DC superhero shows. Arrow has already introduced several Justice League characters, including Black Canary. The Atom would be a good choice for his own show because, unlike the Flash, he won’t overlap with the upcoming Justice League movies.