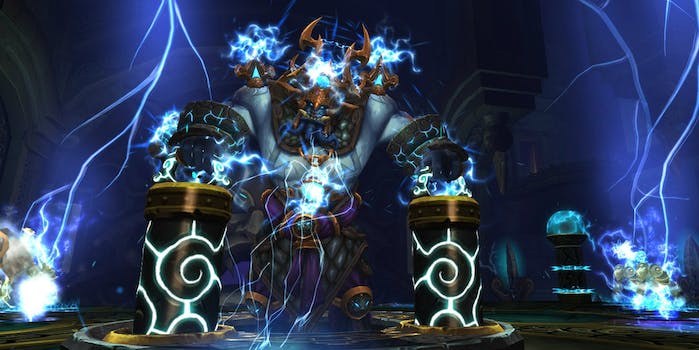 Blizzard bans more than 100,000 players from World of Warcraft

Cheaters in player-versus-player mode get their just desserts.

More than a 100,000 World of Warcraft players using “bots” to automate gameplay were just handed down a six-month timeout from Blizzard Entertainment.

Blizzard announced the decision on the WoW forums on Wednesday, citing action taken “against a large number of World of Warcraft accounts.” The number of bans was revealed during an in-game chat between a WoW player and a Game Master employed by Blizzard. And it appears that players using bots in Battlegrounds, or WoW’s player-versus-player mode, were hardest hit by the wave of bans.

Bots are third-party software that allow gamers to automate specific processes, usually by way of sidestepping around a grind, i.e. the need to repeat the same content over and over again in order to progress to fresh content. Bots are popular in massively multiplayer games like World of Warcraft, because grinding for experience points or loot is a central pillar of most MMO designs.

WoW players may fight in Battlegrounds to accrue a currency called Honor, which may then be spent on purchasing gear that lends particular advantages for PvP combat. Grinding through enough Honor points to buy anything good can be a slow, tedious process, which makes a bot like Honorbuddy that automates combat within a Battleground very attractive.

A YouTube video of a WoW player discovering that almost everyone in his Battleground is using the Honorbuddy bot is hilarious, but also demonstrates a serious problem for anyone who actually wants to fight against other players in a player-versus-player mode.

The bans handed down on Wednesday will expire in November.