Are generic fandom leggings as good as brand-name?

In recent years women have been making strides in demanding fashion companies produce pop culture-themed apparel aimed at them, and not just men. Thanks to companies like Her Universe and WeLoveFine women have more fandom fashion options now than ever before. But some of the coolest fashion items—like printed leggings—are expensive, forcing you to dole out serious cash for these styles.

One of the most popular brands known for taking geek fashion to the next level is Black Milk Clothing, an online Australian retailer that is particularly popular for its unique leggings. There are more options than ever at Black Milk, but they come at a significant price. So, some thriftier geek girls have tried to find a way to get the same style for a cheaper price.

Amazon.com is home to a number of third-party sellers claiming to offer the same leggings, dresses, and more as Black Milk. The fandom fashion community has been circulating this money-saving tip, but can you really get the same product for almost $60 cheaper?

To test this theory, I compared a pair of Black Milk’s leggings to an Amazon.com knockoff to see if you can really save by going with the generic, or if the brand-name quality at a higher price is worth it.

For this test, I decided to try one of Black Milk Clothing’s most popular products, the Mass Effect N7 Wet Look Leggings. With conversion fees, the leggings will cost buyers in the United States around $78.78—quite an investment for some geeky nylon! A quick search on Amazon.com shows a copycat version for much cheaper made by Pink Queen Apparel, Inc., with a description almost the same as Black Milk’s. It even throws the word “black” into the product title: “Pink Queen Hot Stylish Black Mass Effect N7 Wet Look Digital Print Leggings Tights.”

The leggings pictured on both websites look similar enough to make it seem worth the chance of going for the cheaper pair. The Pink Queen leggings are an affordable $19.99 after all, so why not? 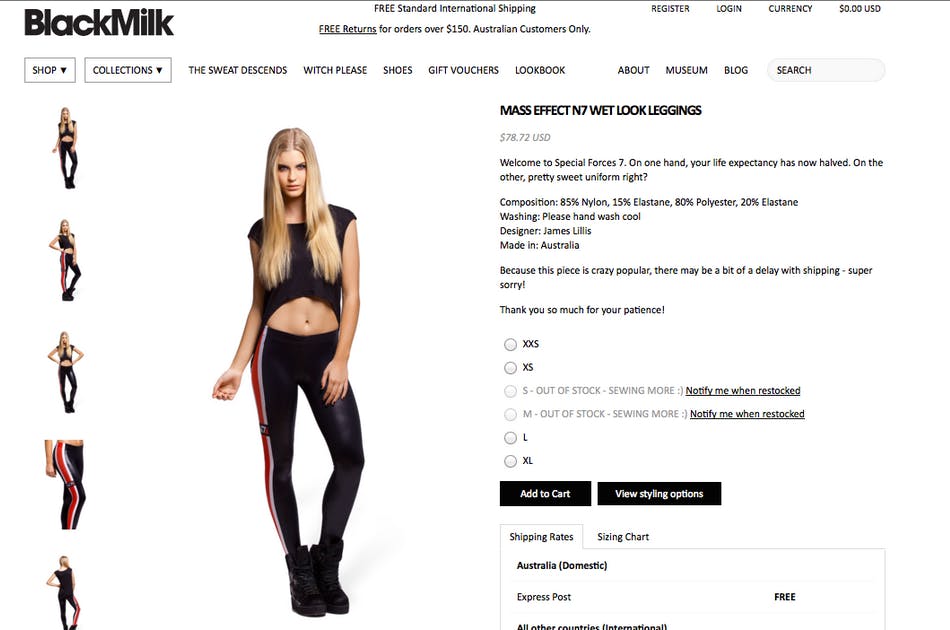 While Black Milk didn’t say exactly how long it would take for the leggings to arrive, I expected delivery from Australia to be quite a wait. The leggings, however, arrived in just 10 business days. The Pink Queen leggings were scheduled to arrive in 17 to 28 business days, but they also surprised and arrived in six. The packaging on the Amazon shipment indicates it was mailed from China, so the quick turnaround is impressive. Both get positive marks for good shipping time. As for sizing, a quick look at the reviews and sizing charts suggest you’re probably going to want to go a size up for both.

Upon unpacking, the difference in the quality was immediately clear. The Black Milk leggings are black with the iconic Mass Effect white and red N7 logo and stripe going down the right leg. The Pink Queen leggings looked similar, but the color was clearly a little off when placed side by side with the Black Milk version. The Pink Queen leggings are more grey than black and while they also have the N7 logo and stripe on the right leg, the logo is noticeably bigger. The color of the stripe is also more orange than red. The white of the stripe is much bigger than the one on Black Milk’s leggings, making it look like the stripe will take up the entire right side of your leg instead of just part of it. 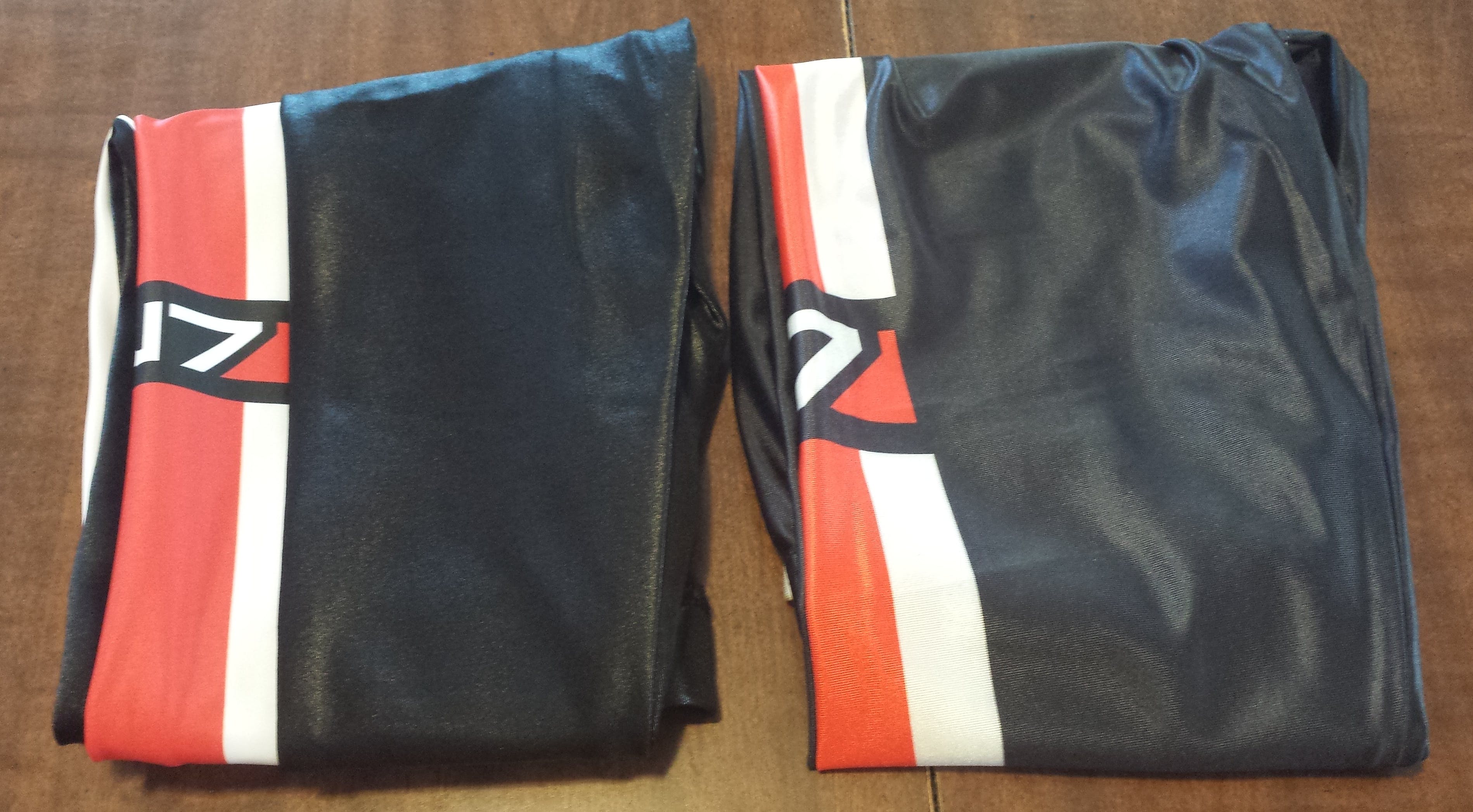 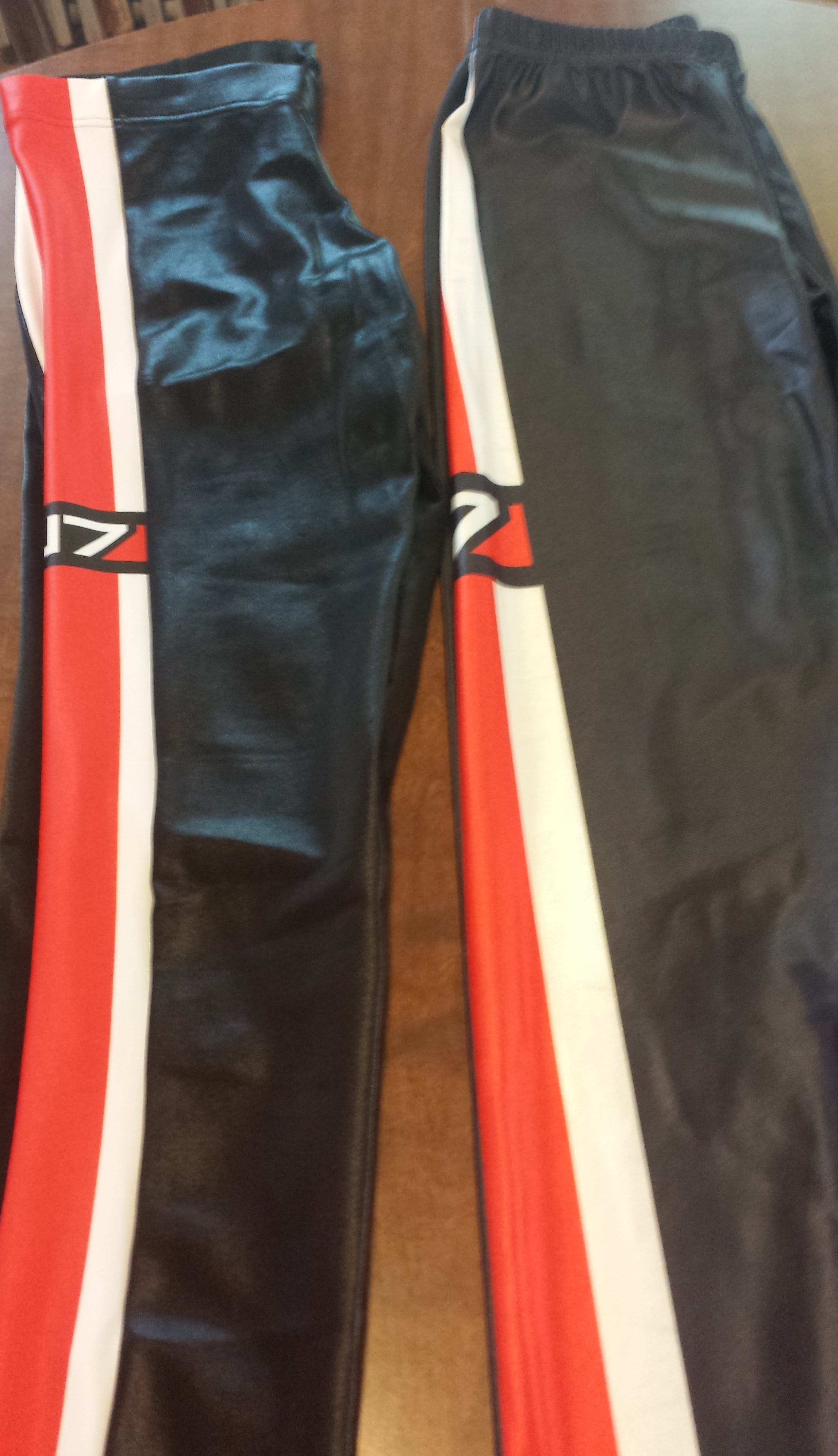 I gave each pair of leggings about two and a half days of wear as I ran around doing my usual daily tasks. I tried Pink Queen first and discovered the leggings are extremely comfortable. They have an elastic waistband, and according to the tag are made of 88 percent polyester and 12 percent spandex. This information differs from the website though, which claims they are made of 86 percent polyester and 14 percent spandex. The leggings stretch with you, which adds to the comfort but also reveals the thinness of the material and makes the grey very sheer.

Pink Queen leggings front, left side, and back views.

The grey and the white stripe on the right leg is pretty see-through once they’re on. The sheerness makes the leggings look even less like black than when they arrived. The leggings also had white discoloration around the left ankle, as if they were removed from the dye too soon when they were made. 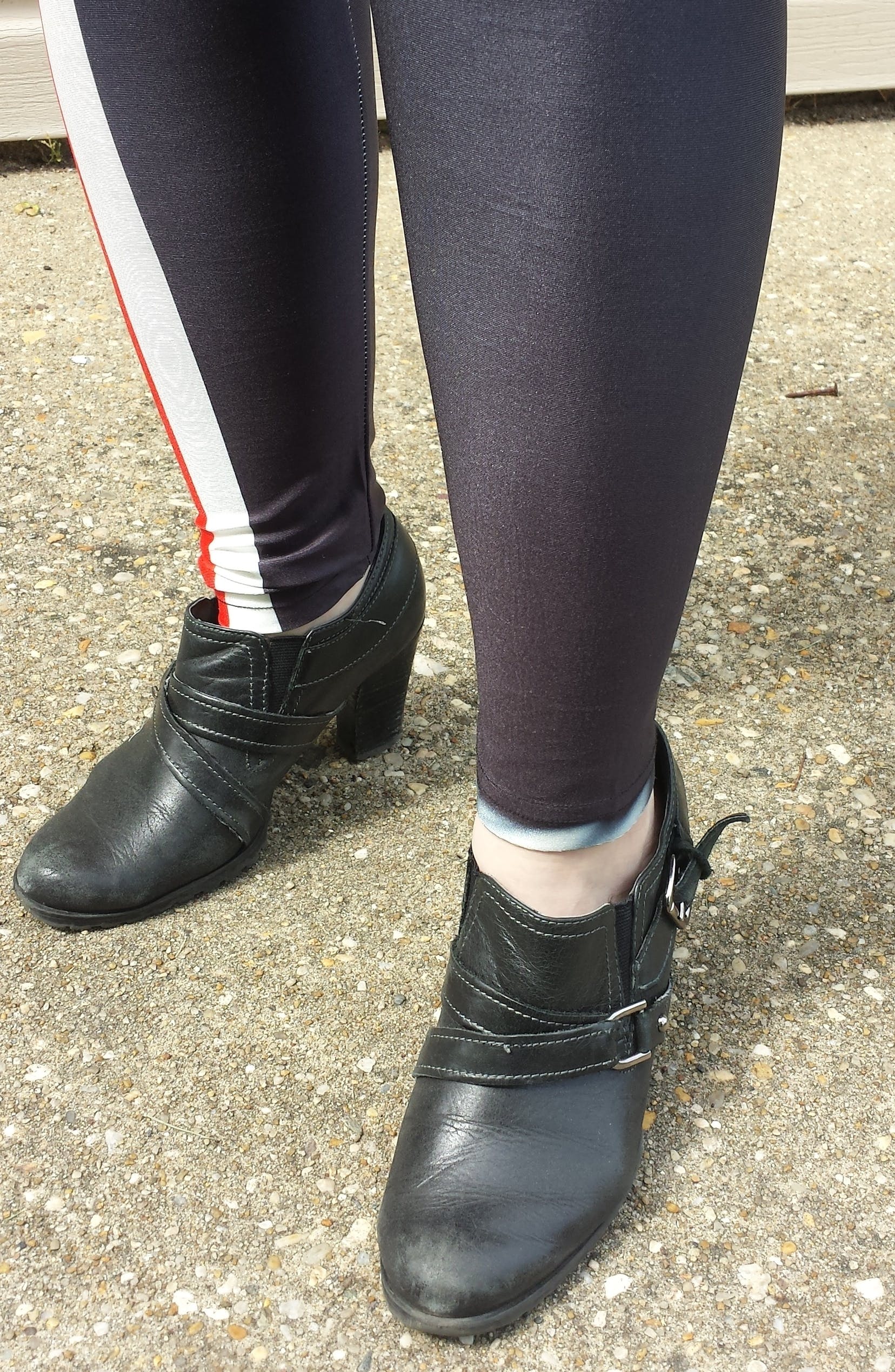 When worn the N7 stripe stretches to basically become the entire right leg instead of being just a stripe down the side. This stretching doesn’t happen to the Black Milk pair. 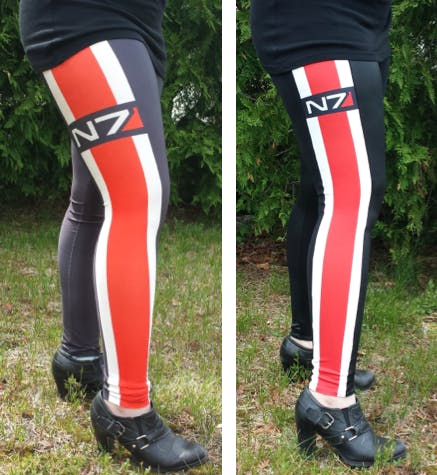 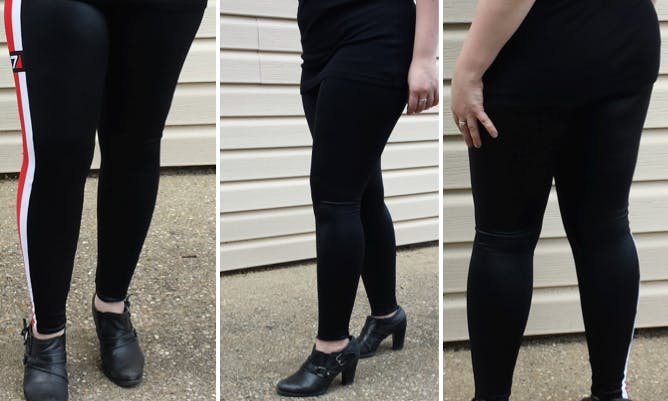 Black Milk Clothing leggings front, left side, and back views.

The material pinched and bunched more than Pink Queen during the first day and a half of wear. After that they stretched and were more comfortable, but still occasionally pinched and felt like they weren’t breathing as much as Pink Queen’s. The black color did not become see-through on Black Milk’s leggings when worn and the white, though slightly see-through, was not as clear as the knockoffs. Both leggings bunched around the ankles and knees as they were worn, which tends to be the norm for leggings.

Clearly there was a difference in manufacturing quality as well. The white of the seams for Pink Queen were much more visible than the seams on Black Milk’s leggings. The Black Milk pair looked solid black all around but the Pink Queen leggings’ seams gave the inside of the legs a thin white stripe going up them. 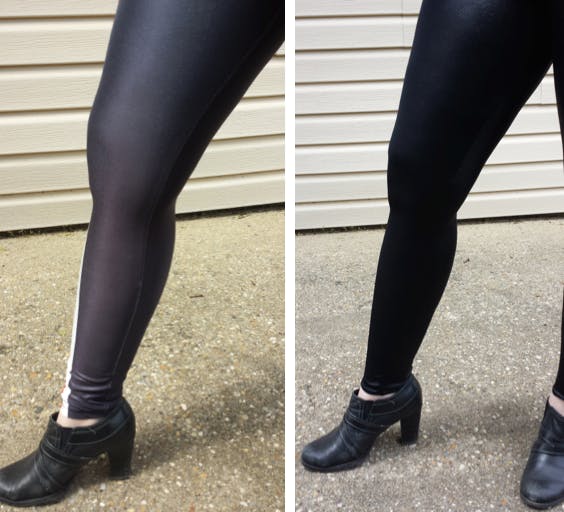 The seams for these also stretched out, whereas I saw no change in Black Milk’s seams. The change was especially noticeable in the crotch seams when the leggings were laid out on a table.

Now that I knew how they would wear, it was time to see if the material would hold up when it came to washing.

Because the leggings are made of different materials, the instructions for washing them were different. The Black Milk leggings are hand wash only and have to be dried in shade. The Pink Queen leggings are machine washable, but can’t be put in a dryer.

After each was washed and dried according to the instructions, they certainly looked different. The hand washed Black Milk leggings were wrinkly while the Pink Queen ones appeared smooth after drying. Once they were dry, I wore each for a few days again. 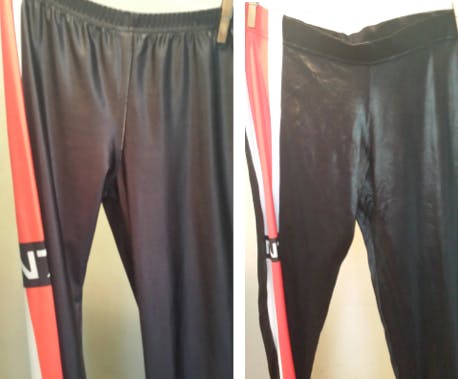 The Pink Queen leggings noticeably shrunk a little after the wash and felt like they were at least a size smaller. The colors didn’t fade but after a day and a half a hole developed in the crotch seam. After placing both flat on a table, you can see Black Milk’s seams stretched slightly but are nothing compared to the unraveling seams of Pink Queen’s.

The Black Milk leggings on the other hand felt the same, the colors didn’t appear to have faded, and after a few hours the wrinkles disappeared. Overall, the quality appeared to remain the same.

The Verdict on Value

After these tests, the truth is you’re not really saving much by going for the copycat leggings, even though they are almost $60 cheaper. Maybe it’s worth a purchase if you just want to wear them once or twice and don’t wash them, but even then you’re not really getting your $19.99 worth out of the product. If durability, color, and styling differences don’t concern you, the sheerness might, especially if you plan to wear the leggings out in public.

In this instance, the more expensive leggings are the better value. Black Milk Clothing’s original leggings are the way to go if you want exactly what’s pictured, to wear it more than once, and to be able to wash your leggings without needing to conduct some emergency seam repair.