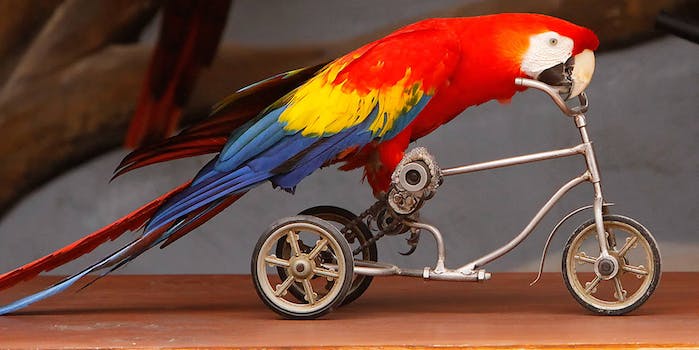 ‘Bird brain’ might not be an insult, according to science

Researchers discover birds have as many neurons in their brains as primates.

A new study on avian intelligence flies in the face of the dimwitted notion of “bird brains.”

The implication that a “bird brained” person has a tiny brain—birds do have very small brains—but it’s probably not an accurate insult to their intelligence. Research published today in the Proceedings of the National Academy of Science shows that certain types of birds like parrots and songbirds pack a lot of power into the small cavity between their ears.

Scientists at Vanderbilt University, the University of Vienna, and Charles University in Prague studied the brains of several different types of birds and found that some of them had many neurons—the cells in the brain responsible for its processing power—packed into regions associated with high-level thinking. In some cases, birds had even more neurons in these regions than even macaques and other non-human primates.

The results help illuminate how birds are capable of big leaps in cognition despite their small brains. It’s no secret that ravens, for example, are extremely smart. Capable of using tools, planning ahead, and solving complex problems, researchers have been scratching their heads at exactly how they do it.

According to lead author, Suzanah Herculano-Houzel, they do it with lots and lots of really small neurons. This is a little different from the norm, Herculano-Houzel said in a video, because typically researchers think of neurons growing larger as cognitive abilities expand over the evolution of a particular animal.

This whole idea supports the notion that animal intelligence isn’t really a size game anyway. While brain size in relation to body size correlates with intelligence somewhat, neuroscientists think that the number of connections between neurons has more to do with intelligence.

So the next time someone calls you ‘bird brained,’ don’t take it as an insult. It just means you’re very cranially space-efficient.