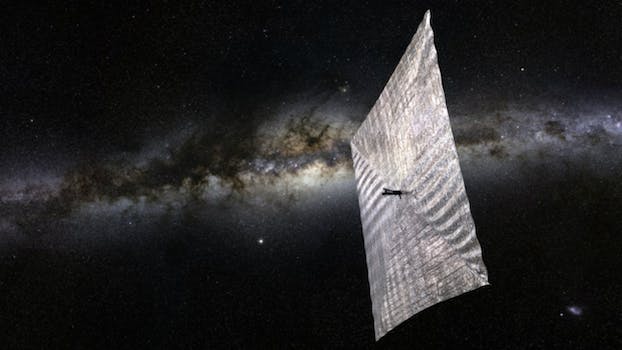 You can help Bill Nye test a solar-powered spaceship

Mere sunlight could be enough to propel a spaceship through the void.

Rocket fuel is expensive, volatile, and potentially unnecessary after a spacecraft reaches orbit. As one of America’s favorite scientists is reminding us with a new crowdfunding campaign, the sun may actually be the best engine in our solar system.

Bill Nye, of “Science Guy” fame, is the CEO of the Planetary Society, a group co-founded in 1980 by famed astrophysicist Carl Sagan to get the public more involved with space exploration. Nye is currently raising money on Kickstarter for a Planetary Society project called LightSail that will use our Sun’s solar radiation to power a propulsion system. The Kickstarter campaign has almost reached its $200,000 goal, with 43 days left until it ends.

Solar sail technology is a theoretical proposition system that was imagined for centuries before it was first seriously discussed in the late 1970s. The basic principle is based on the photons contained within solar radiation. The photons bounce off and thereby push the solar sail, and those tiny pushes eventually build up to high speeds for the spacecraft deploying the sail. Carl Sagan pitched the idea on The Tonight Show in 1976.

The Planetary Society is conducting a test launch for its LightSail technology on May 20, when it will check solar sail deployment from a CubeSat spacecraft. A planned 2016 launch will deploy a solar-sail-equipped CubeSat and a satellite designed to inspect it. The satellite will monitor and record the deployment of the solar sails, at which point it’s off to the races for the CubeSat.

The Kickstarter funding will be applied to the total bill for the project, which is estimated at $5.45 million. The Planetary Society has already raised more than $4.2 million, so the Kickstarter represents the beginning of the final push. Stretch goals for the Kickstarter include a public awareness campaign for CubeSat and LightSail technology.

Illustration via The Planetary Society