The best of Leonard Nimoy on Netflix

'Are you still watching?' Yes.

As the world mourns the passing of Leonard Nimoy, we inevitably look back at the long and wonderful career he gave the world. And thanks to Netflix, we can relive many of Nimoy’s best moments as we remember the qualities that made him a great actor and an even greater human being.

Of course Nimoy’s legacy as Spock, undoubtedly one of the most iconic characters in human history, will continue to live on. But even outside of Star Trek, he had a long and varied career. He was also a revered Shakespearean stage actor, as the bard himself recalled yesterday:

My friend @TheRealNimoy has been called to the rehearsal room. His fellow actors have been waiting.

And he delighted children and spawned endless memes with his classic ode to Bilbo Baggins.

It’s impossible to list all of the great Nimoy moments for you here, but we can at least share some of our favorites from Netflix—right before we go rewatch them all.

Nimoy’s turn as our favorite grave Vulcan made this series the iconic cult hit and sci-fi behemoth it became.  If you’ve never witnessed Nimoy as Spock, these are the classic must-see episodes to understand why he has such a firm place in all our hearts: 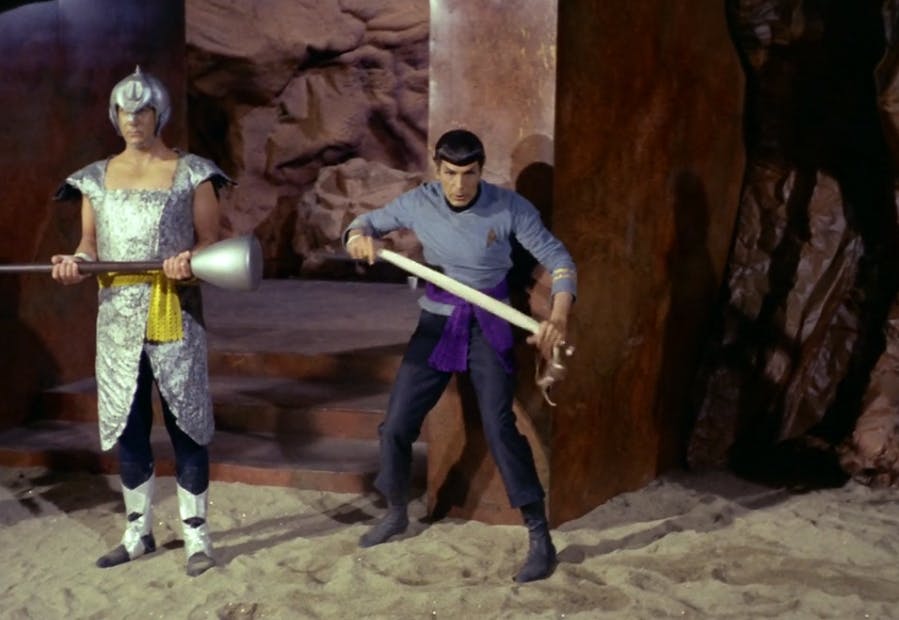 One of the most famous Star Trek episodes, “Amok Time” was written by renowned sci-fi author Theodore Sturgeon and gave us the original, ultimate “have sex or die” scenario. Every seven years, adult Vulcans pay the price for their lifetime of stoicism and go into a deep frenzied heat that can only be solved by mating.  That this premise is an actual episode of television that actually aired in 1967 is enough to make it amazing, but it’s also a chance to see Spock at his most dynamic—warring with himself and struggling to choose between his loyalty to Kirk and the Enterprise and the dictates of his culture. And the climax (we use that word deliberately) includes one of the most famous fights in television history. 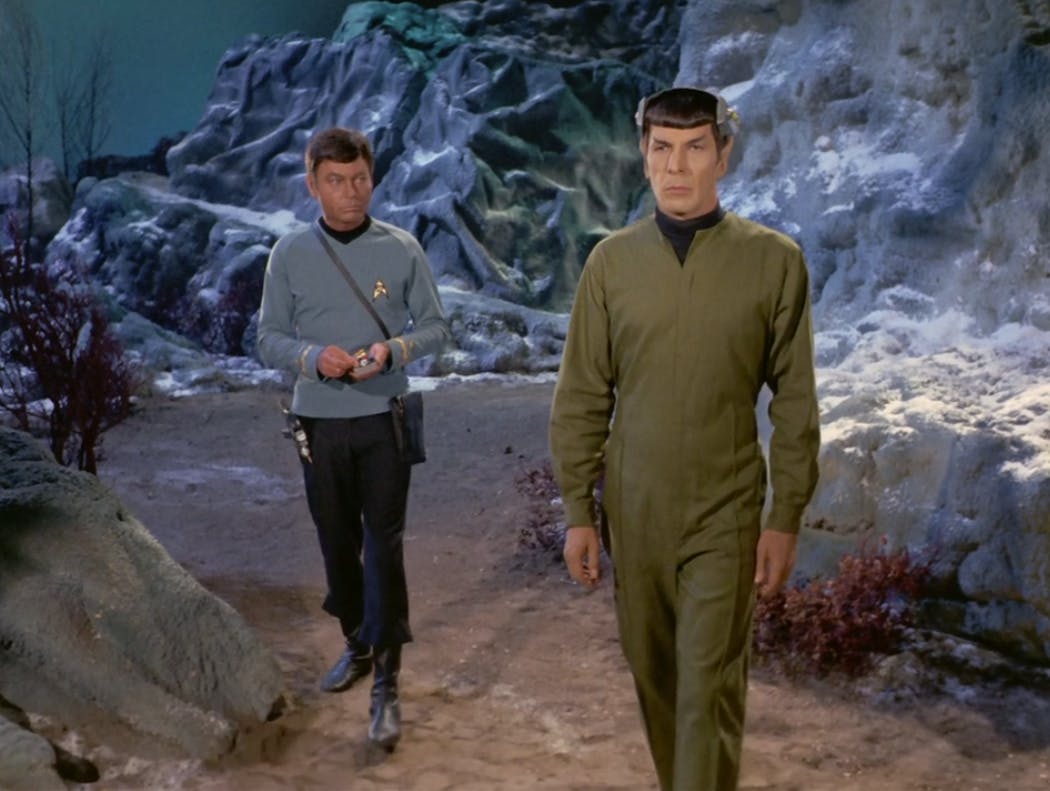 “His brain is gone!” With these words we begin the ultimate search for Spock. When the crew of the Enterprise discovers Spock’s brain has been stolen by an all-girl clan of airheads who need him to pilot their city’s smart house, there’s nothing Jim and Bones won’t do to get it back. This includes turning Spock’s empty body into a remote-control toy so they can take it with him on the hunt to find his own brain, which he will inevitably have to transplant back into himself.

Have we mentioned this show is awesome? 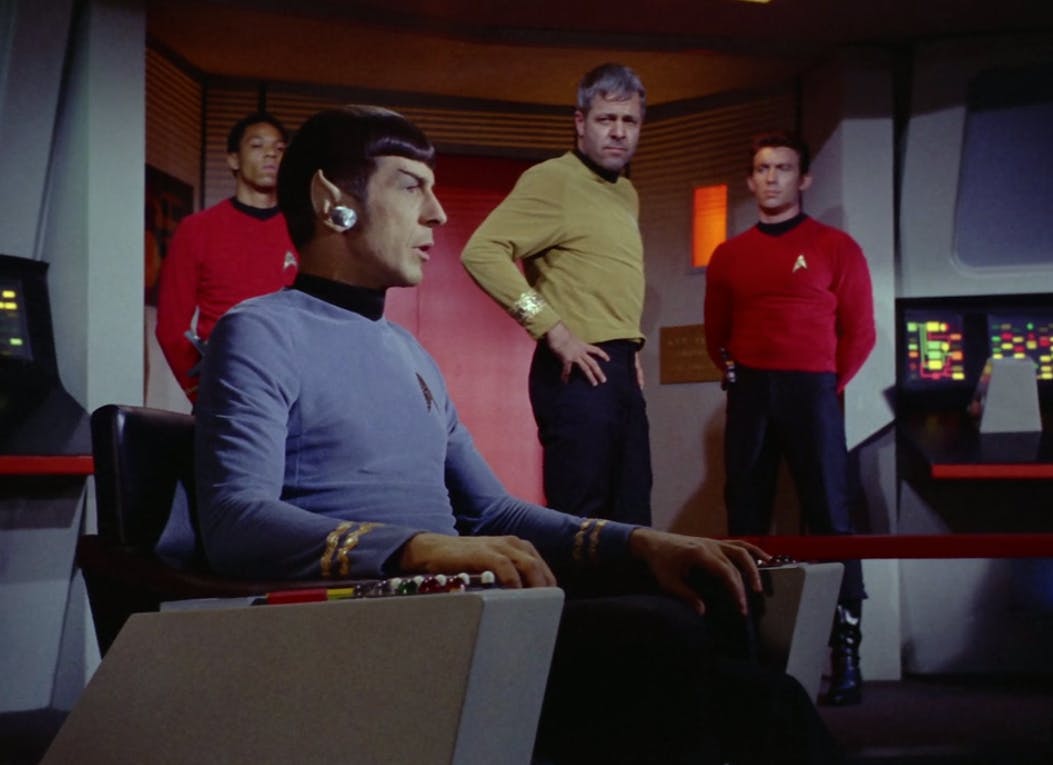 This is perhaps the ultimate episode where we get to enjoy how well Kirk and Spock function together as a team. Forced to separate thanks to a renegade starship captain, Spock and Kirk have to keep the captain from piloting the Enterprise on a suicide mission. Even though they aren’t in contact for most of the episode, it’s clear they have innate trust and confidence in the other to do what needs to be done. Plus, Spock gets to command the Enterprise for once—a rare pleasure for the show. 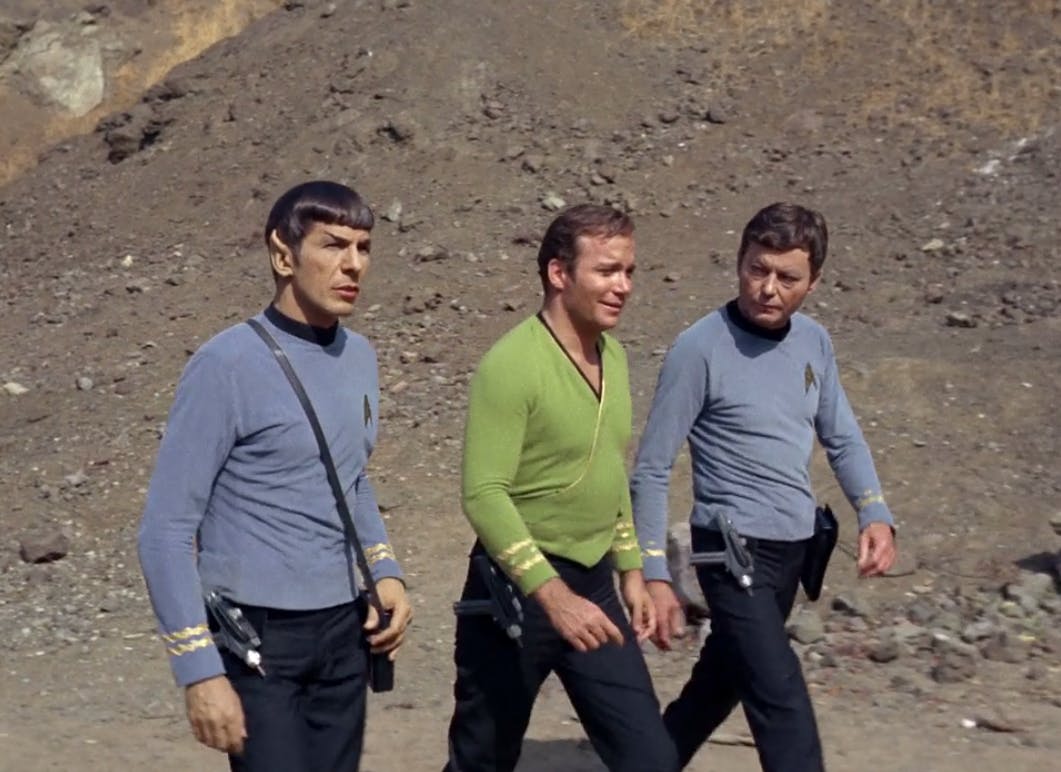 In this episode, Kirk, Spock, and Bones are taken prisoner by a society that forces them to fight to the death. This is a great episode for fans of the cantankerous friendship between Bones and Spock, who are forced to fight each other in the arena. 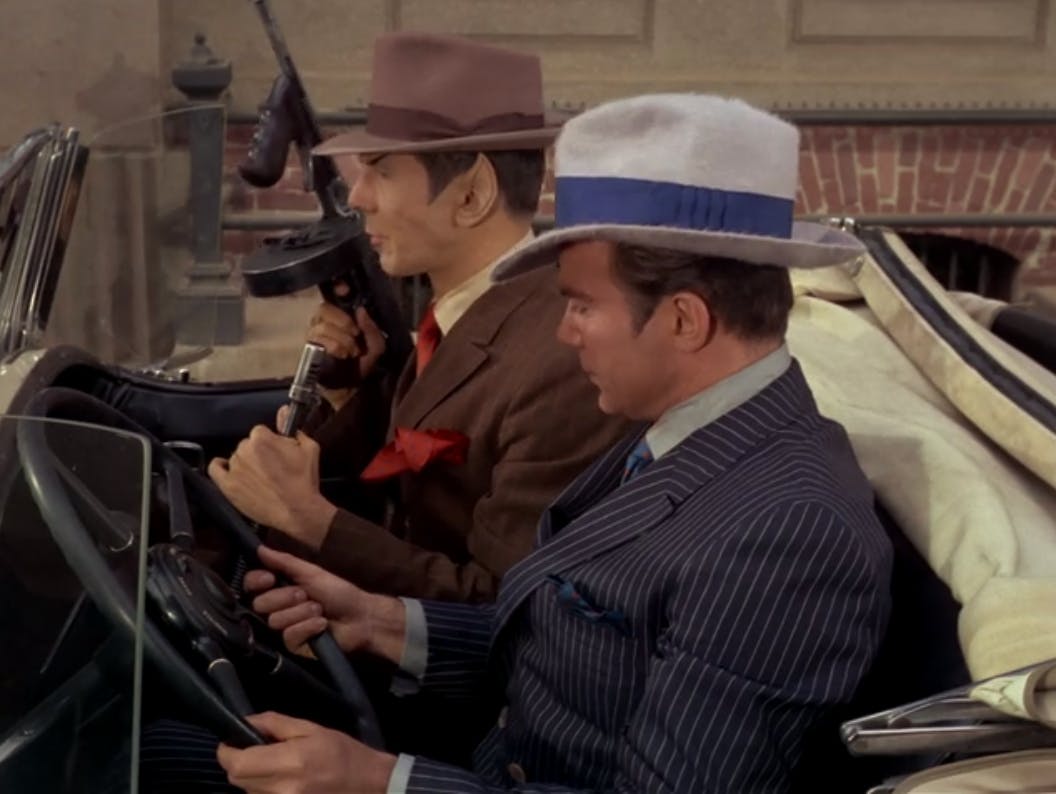 Kirk and Spock get trapped in a world which patterned itself on modern American society—up to the 1920s, that is. Cue the two of them dressing as gangsters, toting machine guns, and speaking in Runyonese in order to fit in. Priceless.

Though this episode is most famous for featuring the first interracial kiss on television, between Kirk and Uhura, it’s also a great episode for Spock fans, who get to watch him dance, play, and make out. Mostly against his will, but such is the way of space exploration. 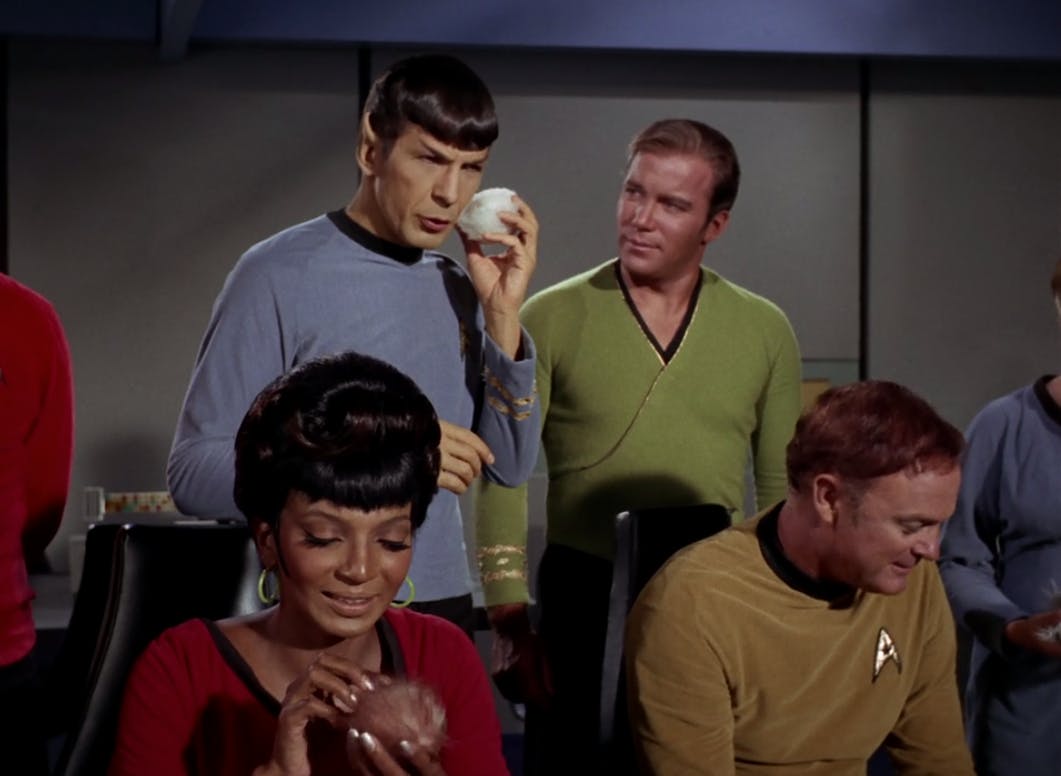 Another legendary episode, this sees Spock and the rest of the crew being totally charmed by an invasion of stuffed furballs that breed like rabbits. This is the episode that launched a thousand Internet memes, but we remember it for the tribbles’ ability to woo even Spock with their adorableness.

The most famous Star Trek movie, with the most famous storyline and ending in franchise history, this one is a must-see for fans of all ages and the ultimate best-of for Spock fans. But if you’ve somehow missed seeing it before, you might want to keep a tissue handy—and queue up Star Trek 3.

Though this is one of the most mocked and parodied Trek films, it continues to be a fan favorite, in no little part because it’s directed by Nimoy himself. The real question here is how a film in which the Enterprise crew has to travel back in time to San Francisco in the ’80s in order to save the whales while disguising themselves as headband-wearing urbanites could ever have been anything but beloved. That’s right. They have to time travel to the ’80s to save the whales. Clearly you should already be watching this. 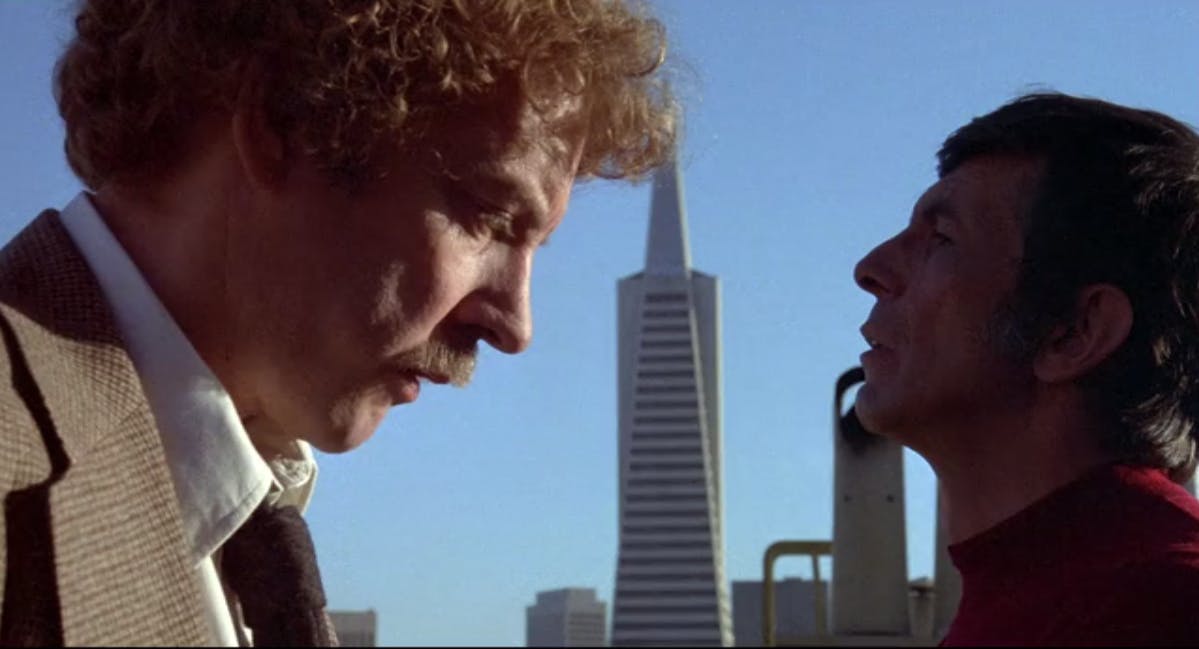 This famous remake of the 1956 horror film features Nimoy as a skeptical but well-meaning psychologist—or is he? If you’ve ever wanted to see Nimoy break out of the stoic Star Trek mode, this is a great performance.

Columbo, “A Stitch in Crime“ 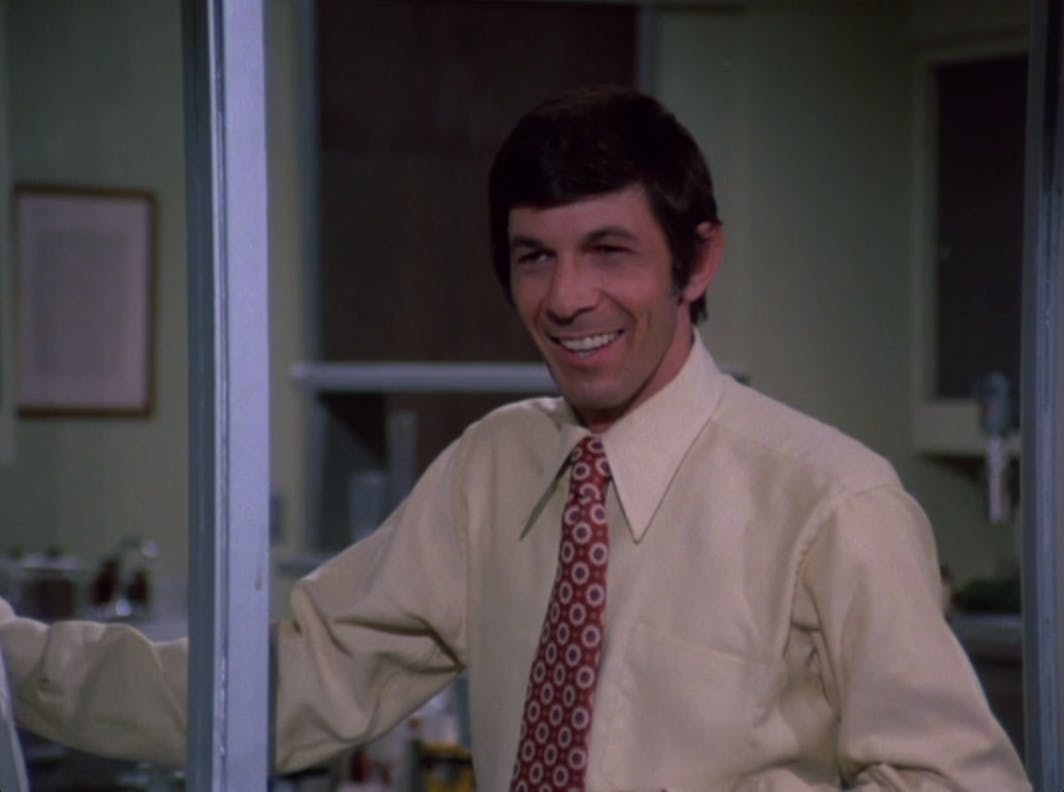 This famous Columbo episode sees Nimoy guest-starring as a charming but arrogant heart surgeon who attempts to take out a rival by sabotaging a routine surgery. In typical Columbo fashion, the episode focuses on the villain and his game of wits with the wily detective. When Columbo gets too close to the truth, we get to witness the rare on-screen explosion of temper from the ever-Zen Nimoy.

Other noteworthy Netflix turns from Nimoy include guest appearances in Mission Impossible, Fringe, and Disney’s Atlantis.