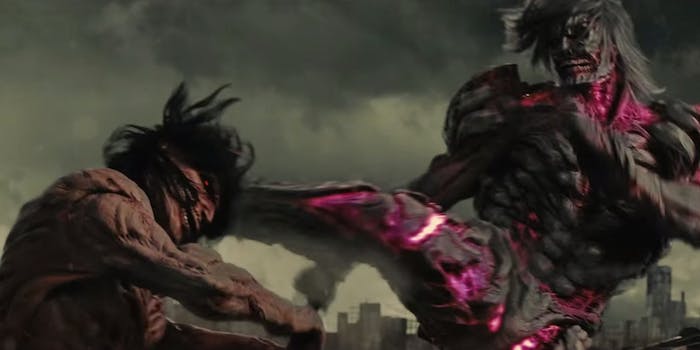 You'll see more titans in more detail than ever.

Like titans? You’re in luck, because apparently the two upcoming Attack on Titan movies have them in droves.

Despite being panned by critics, the first of the new live-action movies loosely based on the hit anime and manga series just opened in Japan to titan-sized crowds at the box office. With the newest promotional video for the movie, it’s easy to see why.

This new trailer finally delivers on all of the teasing from the previous trailers. We finally get to see a certain character fighting Titans as—well, we won’t spoil it, but it’s great. We also get a whole onslaught of Titans of all shapes and ages. Terrifying baby titans will be haunting our nightmares for months.

And Not!Levi is doing a pretty good job of standing in for the real thing, what with all the fanservice and, uh, apparent wooing of Eren.

Really, bad reviews notwithstanding, what’s not to love about a movie that looks like this?

Despite the fact that extras who worked on the film are now lining up to complain about the terrible work environment and the arrogance of the production crew, we have to say that we like how this turned out—at least based on the trailers. And fans of the series will also have the mini-series Counterattack’s Beacon to look forward to in between this film and the next one, out September 19.

Meanwhile, there’s still no confirmed U.S. release date for either film. Hopefully we won’t have to wait too long to get our titan fix.