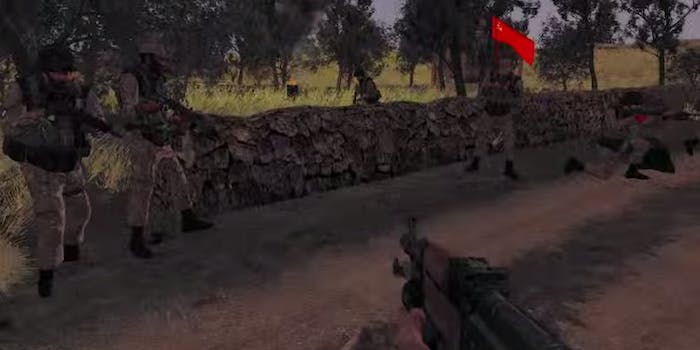 ArmA II is not your typical first-person shooter.

In this YouTube video, Andrew is at the tail end of a mission with his gaming buddies, running on a custom ArmA II map titled Afghan Village. Andrew’s group is attempting to hold a compound while under attack, and when soldiers don’t follow the order to spread out, and are all killed by standing too close to a vehicle which explodes, a desperate attempt to escape follows.

Only teamwork and coordination get Dslyecxi and his surviving virtual soldiers out of there virtually alive. Skip ahead to 35:00 see what happens when all hell breaks loose.

ArmA II is an extremely-detailed military simulator program and video game. It requires the sort of teamwork you need to be successful in a combined-arms military shooter like Battlefield, and elevates that spirit of teamwork into an esprit de corps.

The battle discipline is required because ArmA II is so punishing. Unlike a military shooter like Call of Duty, where players can take fusillades of bullets to the chest and just duck behind cover to recover full health, if you get shot in ArmA II you need first aid. Without it, you’ll bleed out. Or the first shot you take might just kill you dead then and there.

The next time you hear a gamer talking about how badass they are at military first person shooters, tell them to look up some of ShackTac’s ArmA II videos, and ask how they think they’d do.