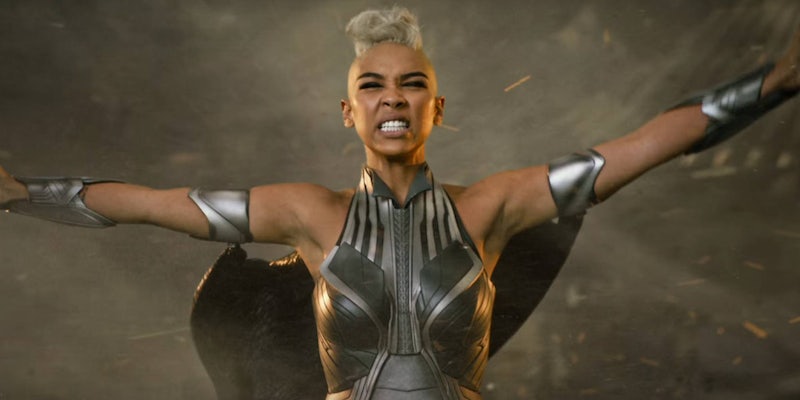 Alexandra Shipp is the future of the X-Men.

Alexandra Shipp stars in X-Men: Apocalypse as the young Storm, a homeless Cairo teen who uses her powers for survival rather than superheroism. With her 1980s punk style and morally ambiguous role, she’s a far cry from the mature, ethereal Storm played by Halle Berry in the earlier X-Men movies.

In an interview with the Daily Dot after the release of Apocalypse, Alexandra Shipp shared her thoughts on Storm’s new backstory, the character’s motivation to join Apocalypse’s supervillain squad, and her hopes for the character’s future.

Storm is such a beloved character. What aspects of her personality from the comics did you want to bring through in your performance?

Alexandra Shipp: I wanted to bring through her strength. The main thing that stood out to me was how strong she was, and how she handled situations. When it came to Halle Berry’s Storm, she had such poise and such meaning behind her movements, but I wanted to show a more immature version of that. I wanted to show that her choices were purely emotion-based, and very headstrong. I wanted to show where that came from, which was her living on the streets of Cairo. And to give you a really good idea her backstory, create that full-on character arc.

Talking about her character arc, I think a lot of people were surprised to see Storm in an antagonist role. Could you tell me a bit about her motivation to follow Apocalypse?

It was really cool, the effect that they used. Apocalypse is almost hypnotizing them, with his eyes and with his voice, and that was effects. So on the day, for me as an actor, I had to find a reason why I would be going with Apocalypse, and for me it was more emotional than being hypnotized.

In my opinion, why Storm goes with Apocalypse is she’s never experienced someone saying that they’ll take care of her. She’s a natural-born mother, obviously, because she becomes the matriarch of the X-Men. But also she’s a protector, and we see in the film that she’s taking care of this little band of thieves. She’s pointing out things that they can steal so they can eat, so they can put clothes on their backs. And it’s beautiful that Apocalypse offers to do that for her, and it’s been a really long time since anyone has done that.

Mind you, she doesn’t know anything about the X-Men—no one does, because they don’t exist. She doesn’t know about other mutants except Mystique, and this guy looks pretty good in comparison to all the experiences that she’s had.

One of the key aspects of the earlier films is the social commentary about the relationship between mutants and humans. How do you think that feeds into this movie, and Storm’s role in particular?

I think that Storm has been reduced to a street rat, you know. No one’s taken care of her, and at the same time, it’s not that great to be a mutant. Yeah, people know about them, but there’s still fear, there’s still a stigma. Growing up in that time, she’s pissed off at the world and pissed off at herself. It’s a harsh reality to be an “other,” and she’s coming from a place of strife.

When I think about how she can possibly relate to Jean or Cyclops or Jubilee, I think it’s going to be really hard to find that common ground, not only as a mutant, but she’s also, you know, a thief and a street kid.

What kind of comics did you read to research the role?

I read a lot of Storm origin story comics. I still read her comics all the time, but what I used for this role was her origin story comics, talking about her time in Africa. I wanted to kind of get a good basis on who she was before we find her in the movie.

What do you think of the 1980s setting? Everyone has these fantastic ‘80s fashions going on.

I loved it! I loved the whole idea of her being punk and a badass, that made total sense for the time. I love the ‘80s myself, so it was really cool to be in that time, and the movie plays on it so beautifully, down to the music. It’s so brilliant.

I’ve seen that you’re interested in being involved in the New Mutants movie. Is there anything in particular you’d like to see from that film, either from your character or just in general?

It would be cool to see Storm in another way, I’d love to be able to portray her as not a bad guy, that would be really fun. But I haven’t heard anything, so I don’t know if I’m in it or anything like that.